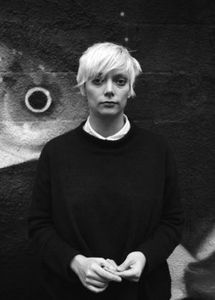 If you think a short story collection packed full of police horses with talons, were-deer, and time machine-building nine-year-olds can't be relatable, you clearly haven't read Paige Cooper's Zolitude (Biblioasis). As strange and wonderful as the characters in these pages are, they are grounded in real emotion and experience, longing and loneliness. It's no wonder Kirkus praised her writing saying "Cooper proves that she can do just about anything."

We're thrilled to welcome Paige to Open Book today to talk about her fresh, odd, sometimes violent and always memorable characters for our In Character series.

She tells us about the division between narrators and all other kinds of characters, discusses the limitations of dialogue, and gives us the best (and most comprehensive) list of fascinating characters that we've seen.

Maybe there are two kinds of characters: narrators and everyone else. Literature is lucky to have narrators—not all art does. A narrator is less a name with an eye colour and a ‘motivation,’ more a circumstance in need of complication, the complications manifesting as fractal details as the writer and reader descend the thermocline of examination. Hopefully this allows for puny and massive uglinesses. Also, annoyingly, contradictions. This does not necessarily mean anyone (the reader, the writer) understands the narrator, but that every detail in the story is part of the narrator. This examination is a narcissistic and cannibalistic process that never feels like control to me—though the language poets have me half-persuaded that writing narrative is totalitarian, anyway. A non-narrator character may also have this sense of crystallizing vertigo, but, because non-narrator characters are actually just details, that depends on the narrator.

By details I mean: emotionally-loaded direct perception; metaphor; fissures, and distortions. Narrators decide who’s hot, who’s wise, who’s terrifying, who’s all three—their opinions are not ours, or the reader’s, but they are hella sneaky. A ‘living’ character implies an autarkic whole, a reality-effect that erases language. To be lifelike is achievable by any simulacrum, from sitcom husbands to your face in the mirror to twitterbots, a Barthesian “triumph of artifice”—ok, a stereotype. James Wood in How Fiction Works makes an argument for so-called ‘flat characters,’ and I do like a good half-sentence abstract; some succinct authoritarian flourish.

The temptation is, as soon as we have seen the other, to reduce it to something containable, and then dismiss it and go back to tending our personal galaxy of suffering. It’s the non-narrators—because they are separate, visible, other, because we have dismissed them as knowable when nothing is knowable—that get to do the surprising, which is the best part, the part where they’ve tricked us into believing they’re separate from us. Or, I guess, alive.

Dialogue is one of the embarrassments of realist prose, along with doors opening and closing and people looking around. I see why some writers skip it or minimize it by refusing to embellish it with quotation marks. I use it, though I try to avoid reading it out loud in public. Don’t get me wrong: I like jokes, I like banality and self-delusion. But there’s no pretending that the sounds that come out of our mouths are capable of adequate signification, not when stripped of tone, expression, gesture. We’ve collectively decided as writers we can’t do anything about this—we’re working with black lines and white space—which is why we’ve all agreed that any dialogue tag except ‘said’ is tacky.

Meanwhile, we’ve also agreed that the sickest burn for an unsuccessful bit of dialogue is ‘clunky’ (unnaturally formal, unnaturally lengthy, unnaturally dull, unnatural.) Of course, if we were linguists transcribing human conversation we’d be using more sounds than words, and the sentence would become irrelevant. So, writers hone and prune, each of us locating our own sweet spot on the continuum.

All that said, the most helpful thing I learned about dialogue when I started writing again was subtext. Conversation in fiction can be anything, it can be contextless and incoherent, but the subtext must be relentless. Subtext occurs because of desire or fear, whether the speaker is conscious or un-. My favourite dialogues are when the characters are trying to speak honestly, but the subtext betrays them, or, even better, they try to manipulate the subtext so it does the lying for them, or the subtext just swells up and chokes the whole thing. Someone, preferably the reader, should probably be surprised. I find this easiest to achieve if the dialogue surprises you when you’re writing it.

So now we’ve all grown up with video. Most of us hate our bodies. Most of us don’t see ourselves represented. The way a writer describes their characters is the easiest way for a reader to judge that writer—you know, morally. There are easy targets: prose that devotes substantial word count to the details of a woman’s body and face, and passes men off with a ‘tall’ or a ‘stern;’ prose that only mentions skin colour when it isn’t white. Just observing fatness or thinness is a judgment and a statement. Describing clothing can be as bad as referencing music: there’s a strained vanity there (amirite, guys? guys?). I suspect the key is to embrace subjectivity and utilize misdirection. Donna Tartt does this.

My non-narrator characters often look like people I know, but of course I can’t admit that, and also I am a coward who doesn’t want the reader to know I distrust blond men, so I actively under-describe. I have only a loose idea of what most of my narrators look like—at least, the ones who aren’t obsessed with their own appearance. Still, narrators are prone to lingering over the details of their lust- or disgust-object, which is often just me taking the chance to linger over the details of mine.

I had a blue-and-brown hardcover book that I bought at the Chapters at Chinook Mall in Calgary in 1996 called something like How to Write Memorable Characters. It had pages and pages of Character Profile Worksheets. I penciled in answers about first jobs, favourite foods, marital status, age, morning rituals, religious practices, scars and identifying marks, idiosyncrasies, flaws. The notion of ‘flaws’ is what makes me laugh most. Like we’re all mannequins with scuffs from getting taken out of storage, missing hands, unfortunate wigs. Like we can point to the one wrong thing, and in naming it eradicate it, and resume our perfection.

I suppose now, an adult woman, I could consult Meyers-Briggs, zodiac birth charts, IQ tests, depression worksheets, BMI charts, lung capacity measurements, Sephora marketing emails, Facebook quizzes (Which NFL quarterback am I?): all the pseudoscience and claptrap I use in my attempts to index myself. We’d all like to see our flaws clearly, so that we can identify our underlying perfection.

What I’m talking about is essentially the difference between a Tolkien world, where even the trees have names, and an Ana Kavan world, which is a labyrinthine, gappy, half-obscured mirror where even the revelations are untrustworthy because our perception is the thing that is flawed.

Catwoman; Cardi B; Siri; Marcus Aurelius; the Donner Party; Alvin Kamara; Adrienne Rich; the vampire Lestat; Colonel Kurz; Sailor Uranus and Sailor Neptune; Elena Ferrante; Elizabeth Holmes; the Trung sisters; Charlotte Shane; Peter Thiel; Egon Spengler; wolf spiders; my grandma who my family wouldn’t let me visit after she got Alzheimers; Charlize Theron getting tutored by Eve Ensler on the set of Mad Max; the ex I’m still afraid of; Black Beauty; Shia LaBeouf; Kathy Acker; Margaret Atwood post-#MeToo; Tilikum the orca that killed three people; my dear friend who has been suffering; the Texas-sized trash vortex floating in the Atlantic; Jason Bourne; Morticia Addams; Medusa; Rupi Kaur; the last unicorn; an artist I know who is poisonous to the people she dates but who we all know will be famous; L. Ron Hubbard; Christopher Hitchens; Slenderman; She-Ra; the guy I played ‘hooker’ with when I was like seven or eight; Lydia Davis when she was married to Paul Auster; myself when I was at my most jealous; a writer friend who is no longer a friend because he became a men’s rights activist on Reddit and teaches his students about it; my friends who married each other and are the happiest people I know; Drew Brees’ baby catching confetti at the 2009 Superbowl; Michael Jackson; Mavis Gallant; Tiffany Trump; the AI Google is developing to read all the books they scanned; a friend who describes himself as pathologically compelled to be the funniest person in the room; myself when I was at my most vicious, furtive, and harmful; a friend who we all thought would die but has been in the hospital for four months with massive brain trauma from getting punched outside a club on Ste-Catherine; the woman who started calling herself his girlfriend when he was in a coma; the starving polar bear in that viral video; Rachel Cusk; Lisa Simpson; Anna Karenina.

Paige Cooper was born and raised in the Rocky Mountains. Her stories have appeared in The Fiddlehead, West Branch, Michigan Quarterly Review, Gulf Coast Online, Canadian Notes & Queries, The New Quarterly, Minola Review, Cosmonauts Avenue, and have been anthologized in The Journey Prize Stories and Best Canadian Stories. She lives in Montreal.

Paige Cooper’s short stories catalogue moments in love. These are stories about women who built time machines when they were nine, or who predict cataclysm, or who think their dreams are reality. They include police horses with talons and giant eagles and weredeer. At the center of it all is love. And if love is the problem, what is the solution? Being closer? Or being alone?