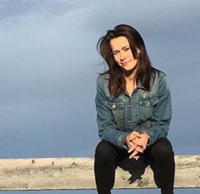 In her new memoir-in-verse, Vulgar Mechanics (Coach House Books), poet K.B. Thors takes the reader on a dark, redemptive journey from heartbreaking loss to spiritual rebirth. Themes of grief, sex, and gender are interwoven through poems which tell the story of one person's battle to regain themselves.

Taking us from the sparse, windy prairies of Alberta to Brooklyn's bustling urban hive, Vulgar Mechanics explores the resilience born from tragedy and the use of one's very physicality as an agent of personal change. An award-winning translator of poetry, Vulgar Mechanics is Thors' debut collection.

We're thrilled to welcome K.B. to Open Book today to discuss Vulgar Mechanics as part of our My Story memoir series. She talks about how to deal with feeling discouraged, coping with the vulnerability of writing such personal work, and how she found the balance between the two seemingly-contrasting sides of her new book.

I didn’t set out to write memoir, but I got into poetry and found myself writing through a lot of grief and personal history. It took years for this book to coalesce, for me to realize it is memoir—there’s a story behind my Mom’s death that I felt had to be told, and my own shaking off of limits and binaries that helped me do that.

Yes! For years I thought I was writing two kinds of poems, maybe two different collections—romantic adventure poems about fluid sexuality and queer heartache, and grieving-daughter, pissed-off wom@an in the world poems. The book took shape when I realized how those two worked together. I was telling my mom’s story, but I was also taking her on those adventures with me. I was writing to dig at what restricts us, in terms of gender and the body, but also to celebrate the fun stuff. The way that all came together still surprises me.

Getting outside and moving are the best ways I know for getting perspective or out of a mood. It’s harder when those times stretch on. I’ve learned to appreciate different eras—times of heavy writing, times of life-attending-to. A lot of these poems I wrote in New York, but others came a year or two later, after I’d been moving around, struggling to find a home/self balance. During that time I took on smaller, more varied projects. Being able to shift gears helps a lot—that’s one of the great things about working on different poems at different times.

That’s kicking in now that the book is out in the world! I worry about my family, since parts of this story are not my own, but so much of this book is about getting out there and living fully without shame. From reporting abuse to sex ed to personal freedom, things can improve with dialogue and I can only start with myself. Anxious train of thought eventually leads to that be-a-drop-in-the-bucket conclusion, and I’m lucky to have people who can help me talk through shaky times. Plus the lovers I’ve written about are cool and most of my family doesn’t read my work.

I’m fleshing out a course I’ll be teaching at New York’s Poetry Project in the spring, wrapping up some translations, and sorting out ideas I have for writing about mermaids, wrestling, and country music. Now that this book is out I’m diving into some larger projects, but it’s too early to say more, now.

K.B. Thors is a poet, translator, and educator from rural Alberta, Canada. Her debut collection Vulgar Mechanics is expected from Partus Press (UK/Iceland) in 2019. Her translation of Stormwarning (Phoneme, 2018) by Icelandic poet Kristín Svava Tómasdóttir won the American Scandinavian Foundation's Leif and Inger Sjöberg Prize and is currently nominated for the PEN Literary Award for Poetry in Translation. She is also the Spanish-English translator of Chintungo: The Story of Someone Else by Soledad Marambio (Ugly Ducking Presse, 2018). Her poems, essays and literary criticism have appeared around the U.S., U.K., and Canada. She has an MFA from Columbia University, where she was a Teaching Fellow in Poetry.

Grappling with queerness and trauma from Alberta to Brooklyn, powering through body, sex, and gender to hit free open roadsIn Vulgar Mechanics, K. B. Thors seeks to invent new strategies for survival through the two most basic tools available to the speaker: language and the body. The work begins in collapse, the poems acting as witness to the death of a mother. The speaker documents how, as her mother's physical body disintegrates, hidden knowledge rises to the surface in the form of "seismic legacy data. " As dark secrets are released, the desire for justice demands improvisation. Moving from the fracked landscapes of the prairies to the steep verticality of New York, this is a collection concerned with hunger, anger, and the shifting fault-lines between play and pain. The poems celebrate the body as a vehicle of excavation and self-determination in a world in which there may be no such a thing as a safe word. Thors pushes against the boundaries of language - the material of sense, meaning - in order to claim a quantum vision of the self, one who transforms trauma into energy through its own multiplicity. The body becomes both ghost and machine, burning the past in its engine to make something beautiful and new, "a thunder egg / bucking the fire pit. "