Sophie Labelle, creator of the popular web comic Assigned Male and an acclaimed writer, activist, and artist, has created a memorable, witty, and vibrant nonbinary protagonist in Ciel, the teenage hero of her books Ciel and Ciel in All Directions.

Her newest novel, Wish Upon a Satellite (Second Story Press), brings Ciel back for more adventures through identity and teenagedom, from school work and friends to sexting troubles and climate anxiety. It is a kiss with their best friend, though, that sends Ciel reeling most wildly, forcing them to decide what, and who, they want. Relatable, gently funny, and achingly real, Wish Upon a Satellite is a teen story both timely and timeless.

We're excited to present an excerpt, courtesy of Second Story Press, from the vibrant new novel that Labelle joked is likely to "get banned in Texas along [with her] other novels". Here we meet Ciel and her friend Stephie and hear about the fateful kiss and Ciel's reaction to it.

Excerpt from Wish Upon a Satellite by Sophie Labelle: 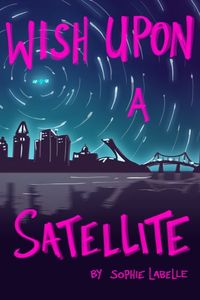 Stephanie Bondu’s lips are everything you would think they were: they make you feel at home and they taste like honeydew lip balm. I had no clue I needed these lips in my life so much, until now.

It’s because, you see, Stephanie Bondu has been my best friend since fifth grade. We had countless sleepovers before tonight. She was there for me during my first heartbreak, and I was there for her that time she scored less than 90% on an exam. So, you know, I should have known about these lips. They were right under my nose. Well, under her nose, technically.

It’s probably too much info, but we spent about ten minutes exchanging saliva and snot during the most intense smooching session of my life. That’s longer than my ex-boyfriend and I ever did. Everything I experienced before feels kind of fake now.

And it happened just like that. No warning signs, no anticipation. Well, okay, we were hugging, but that’s what you would expect from BFFs when one of them just dumped her terrible boyfriend for the fifteenth time. She sent me a text message shortly after dinner saying that, this time, it really was over with Frank. She seemed really pissed. So, I gulped the bolo de rolo cake my dad made for my little brother (it’s his favorite, my dad’s way of apologizing for leaving him at home tomorrow while we go on our last cycling trip before winter) and went to meet Stephie at her mom’s.

It started with a long rant about Frank, whom she’s been dating since time immemorial. Turns out this bad excuse for a boyfriend asked Stephie for nudes because his best friend Viktor got some from his girlfriend. Now, I don’t really know that girlfriend. I mean, I know her face and I can remember her name (it’s Raquel) because we went to the same elementary school, but that’s pretty much it. She’s been quite rude to Stephie and me in the past. If she wants to do something as questionable and potentially illegal as sending nude pictures of her underage self to the smelly, thoroughly average soccer player that is Viktor, I guess that’s her choice. But I draw the line at these boys thinking they can ask for them.

As Stephie was telling me everything, I was angry. First, at Stephie’s pain: it was so unfair to her! Frank should have known that she has body image issues. Feeling validated in her body shouldn’t come at a price. It hits her where she is most vulnerable. And if she wasn’t so opinionated, she might have fallen for it—letting Frank play with her self-esteem in such a toxic way.

Second... how the heck did Frank know about Raquel’s nudes? Did Viktor share them around? Apparently, when Stephie confronted Frank about it, he simply said that it’s what boys talk about in locker rooms. Stephie didn’t buy it. If she had sent him any pictures, Frank could have used them to brag to his soccer teammates and showed them around, which is probably what happened with Raquel’s.

She broke down while she was telling me the story, her anger giving way to despair. She had to stop talking because her sobbing hiccups made it too hard. As we were both hugging on her new bed (she outgrew her princessy, four-poster one), I instinctively pulled her closer and patted her hair. And I guess it worked? She calmed herself and we ended up cuddling, like many times before, although it never culminated in something as intimate as the hot mess we’re in right now.

The tears stopped. We spent an eternity resting our heads on her pillows, staring into each other’s eyes. Strands of hair dried onto her cheeks. Every boiling emotion turned into body heat that felt familiar. I had no clue what just happened. All I know is that it was real. I must look like a deer in the headlights. What’s the expression in her tired, bloodshot eyes? Maybe it’s just drowsiness. I can’t really tell.

We’re holding hands. I wish we could kiss again, I could use some of that honeydew chapstick. But her eyes are now closed, and I wouldn’t dare. So, I just press my forehead against hers to feel her breath near my mouth. Soon, she’s asleep. Too many things are going through my mind for me to go to sleep.

This is the first time I’ve kissed a girl, and it was great. Does that mean I’m bisexual? I know Stephie is, but I never really thought about it myself. Not that I care, particularly, I don’t feel like either a boy or a girl. It makes every potential relationship kind of gay.

Will it change our friendship? Can we still go see bad movies together and ship every character in the most bizarre ways possible? Above her ponytail, which is draped lazily around her neck, her Lafontaine poster is on her wall, that musical we’re both huge fans of. My dad bought us tickets last year for my birthday, and we’ve been waiting impatiently ever since. Does that mean we’ll go as a date? That we’ll both need to dress fancy to impress each other during a romantic pre-show dinner, instead of nerding out with all our Lafontaine gear while stuffing ourselves with piles of greasy poutine?

I gently reach in the pocket of my dress to grab my phone with my free hand. I have a notification from Liam, the person I trust the most after Stephie and my dog Borki. We’re weirdly close, considering I only met him last year. He’s a shy and awkward nerd, although you probably wouldn’t expect such a manga fanatic to also be an international-level athlete. His wall is decorated with medals and trophies he’s won during swimming competitions—along with tons of Japanese-style art he makes. He’s a guy of many talents.

I told Liam I was spending the evening with Stephie because shit hit the fan with Frank.

Even though it’s not my legal name, my close friends call me Ciel. It means “sky” in French. It feels more colorful, changing, and evocative than “Alex,” the name I’m called at school.

You have no idea. Frank has been such a jerk.

I type several attempts at explaining the whole story, but nothing feels right. I just say,

Liam’s spending the weekend on the other side of the border, near New York City, to splash around with the other North Americans. At this point, it’s not even special for him anymore.

It’s fine. I made it to the finals tomorrow. Saw some guys I knew from New England.

He sends a picture of a hamburger and a milkshake on what seems to be a hotel bed.

My teammates and I are having room service dinner!

I put my phone on selfie mode and send him a portrait of myself putting my tongue out. My hair is all over Stephie’s pillow.

We often pretend to flirt, but it’s just a game. I know he’s not interested in going out with me: he told me when I asked him a while ago. He said he’s not ready to be that close to anyone, or something like that. I still think we’d make a good couple.

Stephie is snoring beside me. I’m itching to tell Liam about our kiss. It’s all I can focus on. But I don’t know, it would feel weird to tell that kind of stuff to a boy I had a crush on. What if he thinks I’m only telling him to make him jealous or something? But I have to tell someone. And I’m sure I’ll end up telling him anyway. He is one of my best friends, after all.

Also, I guess Stephie and I are smooching buddies, now? Idk.

Oh! That was unexpected.

So, she made the first move? She’s such a Capricorn. You have to tell me more!

I can call you tomorrow evening, after my cycling trip?

We’ll see. I think we arrive in Montréal at 9 pm. The time to get our bags, take the airport shuttle to the subway, and the subway home, it’s gonna be pretty late...

Fine. Well, enjoy your milkshake with this new layer of suspense in it, then!

Sophie Labelle is an internationally renowned visual artist and author from the South shore of Montreal, in French Canada. She is the transgender cartoonist behind Assigned Male, a webcomic about a group of queer and trans teenagers that has been running since 2014 and has touched millions of readers. She lives in Finland.

Wish Upon a Satellite

Ciel and their friends are growing up, and there are big challenges ahead.

The glaciers are melting and the climate crisis is on their mind, but nothing shakes the foundations of non-binary teen Ciel’s world more than sharing an unexpected kiss with their best friend, Stephie. Everything they thought was clear is suddenly all mixed up—and that’s without the new problems at school: sexting, peer pressure, and overdue book reports.In this new book for teens, Sophie Labelle’s beloved characters first introduced in Ciel and Ciel in All Directions are leaving childhood behind and grappling with new questions of identity, loyalty, and how to negotiate dating and relationships in the age of social media.