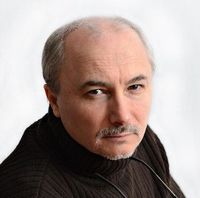 Thomas Leduc's autobiographical debut poetry collection, Slagflower: Poems Unearthed From a Mining Town (Latitude 46 Publishing), delves into a unique family story: four generations of miners, the wisdom to be found underground, and the son who ventures beyond.

Leduc is the former poet laureate in Greater Sudbury, and has referred to Sudbury as "the city that's given so much to my family". The city features prominently in the collection, including its evolution over the years from a mining outpost to a vibrant community.

We're excited to welcome Thomas to Open Book today to talk about Slagflower and his writing life as part of our Poets in Profile series.

He tells us about witnessing progressive miners welcoming women amongst their ranks, organizing a poetry reading at one of the country's largest mining expos, and discovering the note, saved for decades, that led him to becoming a poet.

I love poems that just won’t work. They’re like puzzles with missing pieces. You can kind-a make out what the image is and when you finally find that missing piece, the poem comes into focus. It’s pure ecstasy. When I was working on my debut collection, Slagflower Poems Unearthed From a Mining Town, I came across a mural in downtown Sudbury depicting a woman miner. The line, she becomes the light came to me. I had a line and the image but it wasn’t until almost a year later I discovered the light she had become. I was at a family BBQ and my uncle, who was a shift boss at INCO for thirty years, was talking to my brother in law, currently a miner, about women in mining. Both of them agreed women had become terrific assets. Both said how much they enjoyed working with women underground. My uncle told us he was one of the first shift bosses to have women work for him. At first, he found it a pain that they called in any little thing that went wrong with their machine or reported every safety issue but then he realized that after an hour or two resolving their concerns, they were up and running. Men, on the other hand, pushed themselves and their machines until either they got hurt or the machine broke down sometimes for months, costing the company time and profit. Women in general think in preventative terms whereas men think in terms of risk-taking. Men tend to fix a problem after it happens. Once I heard their conversation, I understood the type of light women became in the workforce both underground and throughout the industry and I had my poem.

Recently I arranged a reading in Timmins, Ontario during the largest mining expo in Canada. I hoped the theme of my poetry would find an audience with like-minded workers. It succeeded to some degree. I managed to get several of my co-workers from Wajax to attend, none of whom had ever been to anything remotely close to a poetry reading. When the evening concluded they all approached me and told me how impressed they were. How the poems were so much more than they expected. This is what I love about poetry, that with a few lines, I can show someone the world they live in, in a completely new perspective. Even ignite someone’s imagination, to offer them a view of the world in way they never thought of. On the other hand, there are times I simply say the word poetry and minds snap shut, or people completely disregard me. I try not to take it personally but this can be insulting and heartbreaking especially when it’s someone I respect.

I always wrote for myself, mostly short stories and in a journal. It wasn’t until after my grandfather passed away I started to consider the idea that I might be a poet.  A couple of months after he passed, my grandmother gave a small piece of paper he had kept in his wallet. On it was a short little poem I had written when I was a kid. He always believed I saw things differently than other people. My grandfather had a farm with a bush lot and when we went to cut trees, he would ask me what trees could be cut and which ones needed to stay. He always respected my answers. After I received the note I went home and looked at my writing. I attended a few open mics and quickly realized, without a doubt, I was a poet. I had always been a poet.

I like to think of the opening and ending lines of poems as two open hands. The first line lifting the poem up to the reader’s conscious and the last line to toss the poem deep into their subconscious. I do tend to put more importance on the last line. I like to leave my readers/listeners with a deeper perspective to ponder. Leave them thinking of the ordinary in an extraordinary way. One of the best examples of this comes from the poem Slagflower. It starts with the line…

Our fathers who came before us

men from many nations

braved the task of altering

and a sky-scraping stem

we bend to the light

and beg to bloom.

I tend to get inspiration from everywhere: work, home, random conversations, memories, pop culture. I put it all in a homemade soup in the back of my mind, then when I have the time, I poor myself a bowl and see what exotic taste come to life on the page. I think one of the most unlikely places I have been inspired from is the world of zombies. I have a whole collection of poems, not yet published, that speak to our fascination with zombies.

Thomas L. Leduc is the descendant of four generations of miners and works at an industrial supply company in Sudbury. His poetry and writing has been appeared in anthologies and magazines in Canada and the U.S. Thomas was Poet Laureate of the City of Greater Sudbury between 2014 and 2016. He is President of the Sudbury Writers' Guild. He lives in Sudbury with his wife and two children.