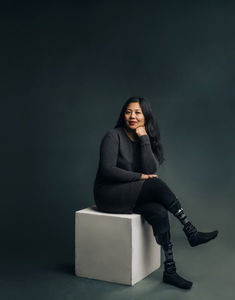 "I love its humour, clarity, irreverence, and rage," said poet Sara Peters about the stunning new collection, Phantompains (Book*hug Press) by Therese Estacion. And even that effusive list doesn't cover all the remarkable qualities of Estacion's poems: The collection is a heavy hitter that manages to simultaneously move lightly from the likes of mermen and ogres (figures inspired by Filipino horror and folk tales from Estacion's childhood), to hospital rooms and grief.

Delving into the devastating experience of losing her legs below the knee, her reproductive organs, and several fingers to a rare infection, Estacion is equally able to wield the surreal and the painfully, starkly realistic to create raw and powerful poems from trauma. Highly anticipated before its release, it's now available and earning praise from readers and writers alike, including author Tamara Faith Berger, who perhaps said it best: "a masterpiece: utterly indelible."

We're excited to welcome Therese to Open Book today as part of our long-standing Poets in Profile interview series, where we discuss the writing process and significant moments in a poet's life.

She tells us about how "lonely weekday evenings" transformed into a favourite part of her poetry life, how she sometimes plays hide and seek with her poems, and the book she loved so much that it pulled her out of a poetry hiatus.

I started to write a lot of poetry I felt strongly about after my illness. The work that came was indicative of the transition I was in. Just to be able to write about my feelings without guilt or censorship felt redemptive and stabilizing.

Also, studying poetry in a relaxed setting the way I did as an adult (in a continuing education night program) made writing enjoyable. I didn’t have the pressure of needing to be published or having to compete with my peers. My instructors and classmates were all very encouraging, and reading and talking about poetry with enjoyment became the focus.

Most of us were taking the courses to be out of our homes on a potentially lonely weekday evening. They were really some of the most fun learning environments I’ve ever been in.

It depends... sometimes I move on from it completely. Other times, I put them away and give them time to rest a little. Then, I go back and revisit them to gauge whether they were as terrible as I thought they were or see if I can maybe take a line here and there to bank for later. Although, I must admit, some of my most satisfying moments came when I did not give up, for some reason, and found that perfect word or sentence I’ve been obsessively searching on for weeks. It’s like playing a game of hide and seek with the poems.

I’ve always struggled with my endings (and endings in general). They tended to feel like a presentation, something catered. I’ve tried very hard not to save the reader or myself with my endings and be open to what the poem needs to express, as opposed to indulging my need to “fix” the poem or me. So, I guess, for me, the endings are what I pay close attention to.

I love this question, primarily because I LOVE the last book I read and want to share it with others as much as I can! That would be Stranger Baby by Emily Berry (recommended to me by another intensely brilliant poet: Sara Peters). Her book brought me out of the poetry hiatus I was on.

There’s a psychoanalyst named Winnicott that I really like. He said, "At the centre of each person is an incommunicado element, and this is sacred and most worthy of preservation." Poetry is one way I communicate this "silent" element of myself (best part about writing poetry). So, I am always trying to put my writing out there while trying to preserve and not lose it to my external world at the same time. Losing my writing to others (worst part about writing poetry) is something I am very aware of when I write. I want to share the most intimate parts of myself, but be able to preserve it just for me at the same time.

Therese Estacion is part of the Visayan diaspora community. She spent her childhood between Cebu and Gihulngan, two distinct islands found in the archipelago named by its colonizers as the Philippines, before she moved to Canada with her family when she was ten years old. She is an elementary school teacher and is currently studying to be a psychotherapist. Therese is also a bilateral below knee and partial hands amputee, and identifies as a disabled person/person with a disability. Therese lives in Toronto. Her poems have been published in CV2 and PANK Magazine, and shortlisted for the Marina Nemat Award. Phantompains is her first book.

Therese Estacion survived a rare infection that nearly killed her, but not without losing both her legs below the knees, several fingers, and reproductive organs. Phantompains is a visceral, imaginative collection exploring disability, grief and life by interweaving stark memories with dreamlike surrealism.

Taking inspiration from Filipino horror and folk tales, Estacion incorporates some Visayan language into her work, telling stories of mermen, gnomes, and ogres that haunt childhood stories of the Philippines and, then, imaginings in her hospital room, where she spent months recovering after her operations.

Estacion says she wrote these poems out of necessity: an essential task to deal with the trauma of hospitalization and what followed. Now, they are demonstrations of the power of our imaginations to provide catharsis, preserve memory, rebel and even to find self-love.