Following a successful re-launch in 2016, the Vine Awards for Jewish Literature honoured four Canadian writers on October 3rd at the Park Hyatt in Toronto.

Each of the four winning authors at the luncheon was presented with a unique glass Vine Awards trophy and their $10,000 prize. The awards are given based on literary merit to both Jewish and non-Jewish authors who engage dynamically with Jewish themes, traditions, or history in their works. The four categories are fiction, non-fiction, history, and children's writing, with an additional poetry prize awarded every three years (it was most recently presented last year).

This year, the winners, supporters, jurors, and friends of the prize gathered in the soon-to-be-closed Park Hyatt, with prize donors Lillian and Norman Glowinsky and their family in attendance. The Lillian and Norman Glowinsky Family Foundation has supported the prize for over ten years, to honour the memory of Lillian's parents, Holocaust survivors Helen and Stan Vine. 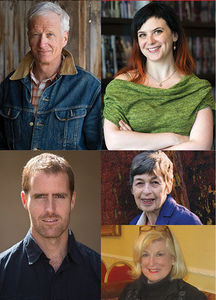 Each of the winners spoke briefly but passionately about their projects. Fiction winner Peter Behrens told the story of his Catholic father, who had left Germany in 1919 before returning in 1939 to try to persuade his own parents to leave. His father ended up leaving just one day before England declared war, and the story of his fraught trip left a deep impression on Behrens, whose novel follows the friendship between a young Jewish woman and a non-Jewish young man during the First and Second World Wars.

Miriam Libicki, the non-fiction winner whose book got its start as a series of handmade zines, spoke candidly her identity as a Jewish writer and how important it was to her to explore that. She praised the Jewish tradition of questioning concepts through writing and discussion, saying that she appreciated a community that allowed a discussion of alienation "even when what we're alienated from is the experience of Jewish identity itself." She spoke to how specific stories can carry universal truths, saying, "you have to fully reckon your own identity to get to empathy."

The winner of the History prize, Matti Friedman, was especially touched by the prize ceremony's location. Though he has lived in Israel for more than 20 years, the acclaimed memoirist and journalist grew up on Brunswick Avenue in Toronto's Annex neighbourhood, a stone's throw from the Bloor and Avenue Road location of the luncheon. He reminisced warmly about his mother's time working at the Royal Ontario Museum just across the street as he accepted the award for his book Pumpkin Flowers, which was also nominated for the Hilary Weston Writer's Trust Non-Fiction Prize and the RBC Taylor Prize for Non-Fiction.

The final category was children's literature, where the award was shared between author Irene N. Watts and illustrator Kathryn Shoemaker. They gave their acceptances speeches together, approaching the podium and quipping, "We do everything together." Watts then shared an anecdote of her childhood, saying that she was seven years old in 1938, when she was placed on a Kindertransport train with 200 other children and rescued from a Nazi-controlled area just before the war broke out. "Who would have guessed I would end up here?" she said as she accepted the award for her book with Shoemaker, Seeking Refuge.

The winners were selected by a jury comprised of author and musician Bob Bossin, author Ami Sands Brodoff, and author Cary Fagan.

Fiction: Carry Me by Peter Behrens (House of Anansi)

Non-fiction: Toward a Hot Jew by Miriam Libicki (Fantagraphics Books) 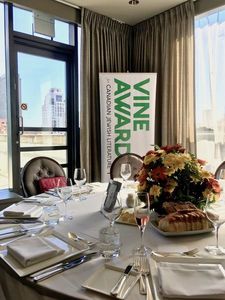 The Vine Awards are administered by the Koffler Centre of the Arts.

For more information about the Vine Awards, visit the Koffler Centre of the Arts website.