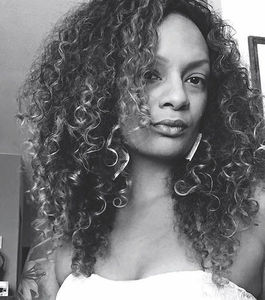 Dear Current Occupant (Book*hug) is the second book from Vancouver's Chelene Knight, whose debut poetry collection Braided Skin was praised as "compelling" and "a whorl of wisdom".

With Dear Current Occupant, Knight transitions to creative non-fiction, a natural fit for a writer who has always drawn powerfully on her own experiences for her work and whose non-fiction retains a poetic sensibility.

Set in the 80s and 90s on Vancouver's Downtown Eastside, the memoir weaves together letters, poems, essays, and more to reflect on a turbulent childhood. In particular, Knight addresses letters to the titular current occupants of the 20+ homes she lived in during that time with her mother and brother.

From witnessing parental drug use to struggling with her identity as a mixed race child with one East Indian and one Black parent, Knight uses memories and experiences to create an intimate, poignant narrative. With deft, artful writing, she creates a moving meditation on the meaning of home.

We're incredibly excited to announce that Chelene will be Open Book's June 2018 writer-in-residence, bringing her vibrant, urgent, and fresh voice to our site.

You can get to know her here as she tells us about how the question that drives her writing in this book and all other projects, how the soundtrack she needs while writing varies with genre, and the importance of good friends to talk you down when you threaten to quit your book and buy a food truck - and then be sure to return throughout June to hear more from Chelene on our writer-in-residence page!

Dear Current Occupant has been in the works for many years. When I wrote my first book, Braided Skin (Mother Tongue Publishing, 2015), I felt as though that was me “dipping my toes in the water.” I knew I wanted to talk not only about identity and belonging in terms of place, but I wanted to hone in on what that looked like growing up in a family like mine. The book itself is hybrid CNF, and by that I mean it doesn’t follow one particular chronological narrative. It bends, it twists, it jumps around in time, shifts from first person to second, incorporates flashbacks, poetry, letters, photos, maps... essentially the book itself harbours the fragments that make up my childhood, and they are stitched together without fitting together. Dear Current Occupant is a heartbroken love song about Vancouver and what it was like to grow up in a city that didn’t know I existed.

“What does it mean to be home?” This would be the question I attempt to answer in most of my writing. The question itself has been there since I was a child. It’s probably the driving force behind me diving into writing in the first place. I’ve yet to answer it.

This project did a complete 180 from the first day I started. During the winter of 2013 I ventured out into the cold and stood in front of the 20 homes I lived in as a child. I stood there with a notebook in hand writing down any memories that came. It was a very visceral experience. The book initially started as memoir in my head, but I quickly saw the poetics taking over and so I wrote it as a full-length poetry collection. After having the manuscript accepted with BookThug as poetry, we later decided that it may work better as creative non-fiction. So I rewrote it. And 10 drafts and 4 years later, here we are!

I write in small bursts. Very small bursts. I need to be alone and I cannot have anyone sitting behind me, so I need my back to the wall. It really depends what genre I am writing in. For CNF I need music. For poetry I need silence. For fiction I need background noise. I never question these things, I just give in. Completely. Being able to write, is a blessing. It’s a privilege that I am super grateful for and so I think I owe it to my writing to give the process the tools it needs to get the words onto the page.

I text my friends saying I am going to quit writing and go buy a food truck. They quickly talk some “sense” into me, and I get back to it. I am easily discouraged because I write in small bursts... I cannot get a lot out all at once, and what I do get it is so bloody first draft even I (as a seasoned writer) think it’s crap! I know what revision is and love it, but it’s hard to talk yourself down off that proverbial edge sometimes.

One of the biggest compliments I ever received about my writing was that “this reads like I am having a conversation with you.” So a good book to me does just this, while amplifying the author’s true voice no matter the genre. A good book takes you to a place you never knew existed, but now that you are there, you cannot imagine being anywhere else. Amber Dawn’s Subrosa is one of my favourite books because of this. I felt like I was taken to another world. I would say the same about Toni Morrison’s The Bluest Eye. Morrison is one of those writers who has that writerly style where after three sentences you are hooked, you are invested, and you eternally are blessed to have inhaled her words.

I am writing a historic novel set in the 1930s-60’s Vancouver (in Hogan’s Alley), titled Junie. Junie is a black, female artist who is struggling with how to express her sexual identity, her art, and her undeniable love and lust for her best friend, Estelle. Junie attempts to find home and belonging while navigating the difficult terrain of a crumbling city, and a difficult family. I am almost halfway through a VERY rough first draft.

Chelene Knight was born in Vancouver, and is currently the Managing Editor of Room Magazine. A graduate of The Writers’ Studio at SFU, Chelene has been published in various Canadian and American literary magazines. Her debut book, Braided Skin, was published in 2015. Dear Current Occupant is her second book. Chelene is also working on a historical novel set in the 1930s and 40s in Vancouver’s Hogan’s Alley.

From Vancouver-based writer Chelene Knight, Dear Current Occupant is a creative nonfiction memoir about home and belonging set in the 80s and 90s of Vancouver’s Downtown Eastside.

Using a variety of forms including letters, essays and poems, Knight reflects on her childhood through a series of letters addressed to all of the current occupants now living in the twenty different houses she moved in and out of with her mother and brother. From blurry and fragmented non-chronological memories of trying to fit in with her own family as the only mixed East Indian/Black child, to crystal clear recollections of parental drug use, Knight draws a vivid portrait of memory that still longs for a place and a home.

Peering through windows and doors into intimate, remembered spaces now occupied by strangers, Knight writes to them in order to deconstruct her own past. From the rubble of memory she then builds a real place in order to bring herself back home.