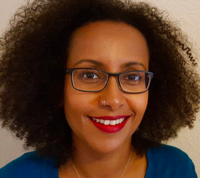 Djamila Ibrahim's Things are Good Now (House of Anansi) is the kind of debut that can't be ignored. A vibrant, gutsy, thoughtful short fiction collection, it was called "an insightful and imaginative debut... as important as it is engaging" by Zoe Whittall.

Whittall isn't alone in her endorsement of Ibrahim's talents. Ibrahim has been nominated for both the Penguin Random House Canada Student Award for Fiction and Briarpatch Magazine’s creative writing contest, and even though Things are Good Now isn't out until February, it's already building buzz, including a nod in NOW Magazine's "10 Books to Be Excited About in 2018" feature.

In stories that travel the world (including settings in East Africa, the Middle East, Canada, and the United States), Things are Good Now engages with questions and themes around the migrant experience, relationships, identity, and belonging.

Today as part of our In Character series, Djamila introduces us to some of the unforgettable characters in her stories (including Aisha and Adam, torn between love and country, and Nebiyat, an Ethiopian orphan adopted by a Canadian family), shares her strategy of starting stories with "a bird's eye view", and reveals which story in the collection spawned a novel idea.

Tell us about the main characters in your new book.

Things Are Good Now is a story collection. It has a diverse group of characters. Here are a few:

In "Little Copper Bullets" we meet Aisha and Adam. Aisha is an Eritrean ex-freedom fighter. She’s passionate and fierce, but restless and prone to give in to irrational fears. Adam is Aisha’s Ethiopian boyfriend. He’s caring, bookish, and mostly apolitical. When war between Ethiopia and Eritrea breaks out their relationship is called into question. They have to decide what matters most to them: their allegiance to their respective country of origin or their love for each other and the possibility of a shared life in Canada.

In "Spilled Water", there is Nebiyat, a bright and imaginative ten year-old orphan from Ethiopia, struggling to navigate the culture and traditions of her adoptive Canadian family. Nebiyat is haunted by the memory of a tragic event that occured while she was still at the orphanage. Her new family’s lack of faith—Nebiyat had a deeply religious upbringing—causes her to mistrust and fear them so she carries the weight of her secret alone. But there is no going back and Nebiyat is eventually forced to confront her worst nightmare.

Then there is Mariam, a hard-working, middle-aged mother of two. She’s a devout Muslim woman and a proud and authoritative figure. When her son is killed, Mariam is heartbroken but when she realizes she might have had a hand in his demise, her world unravels completely. As she goes over the events of her life to make sense of what happened, she comes face to face with some unpleasant truths about herself.

I agree. Weeks and sometimes months before I sit down to write a story, I try to imagine who the characters are and what they believe in. I research the historical, political and cultural context they inhabit. I try to anticipate their reactions to a given situation. Throughout the writing process, the characters and I have long conversations where I try to convince them of my wisdom but in the end they choose their own paths. At that point, my job is to ensure that the story is coherent and to tie loose ends. What fascinates me most and what keeps me going is the element of discovery, the surprising turns stories take, the endings that we sometimes resist until we realize they are inevitable.

Generally, I pick names that match the characters’ religious and ethnic backgrounds. I also tend to choose names that are easy to pronounce and remember because I have a terrible memory when it comes to names so I assume everyone is like me. Finally, I try to not pick names of people I am close to so that I’m not influenced by their experiences or personalities.

I usually start writing in the third person omniscient POV. It gives me a bird’s eye view of who all the players in a given story are and how they relate to the main character. Somewhere along the way, I find the POV that feels right. But sometimes, I know from the get go. First person narrative is more intimate, immediate and for that reason, I often find it intimidating but in the end, I go with what the story calls for.

Dialogue is challenging. It takes a lot rewriting and refining to get it right. Like many writers I often listen in on conversations on the train or other public spaces. If I hear an interesting anecdote at family gatherings, or an unusual expression, I make note of it. I try to pay attention to people’s mannerisms as they speak, and to listen to what they don’t say. It’s essential to put the manuscript away for a while, and to have others read your draft. That’s the best way to spot clunky passages.

Do you have anything in common with your main characters? What parts of yourself do you see in them, and what is particularly different?

I’m sure small parts of me leak into my characters. I think that’s inevitable but they’re also very different from me. Each character is a composite of people I know, those that pass through my life, strangers I notice in public spaces or those I read about on the news. What makes the writing process exciting is the sense of wonder and intrigue I feel about the characters and their lives.

I’m working on a novel based on the last short story in the Things Are Good Now collection titled "Heading Somewhere". The two main characters, Sara and Omar, leave their country and each other in search for a better life abroad. Omar marries his way to Canada and Sara finds domestic work in the Middle East. The choices they make through the years and the secrets they accumulate threaten their relationship. But when Sara finds herself caught in the Syrian war, her first thoughts are about Omar. Omar sets out to do whatever it takes to find her. It’s the love story of a man and a woman thrust into the tides of global migration but also of the people they meet along the way.

Djamila Ibrahim was born in Addis Ababa, Ethiopia, and moved to Canada in 1990. Her stories have been shortlisted for the University of Toronto’s Penguin Random House Canada Student Award for Fiction and Briarpatch Magazine’s creative writing contest. She was formerly a senior advisor for Citizenship and Immigration Canada. She currently lives in Toronto.

Set in East Africa, the Middle East, Canada, and the U.S., Things Are Good Now examines the weight of the migrant experience on the human psyche. In these pages, women, men, and children who’ve crossed continents in search of a better life find themselves struggling with the chaos of displacement and the religious and cultural clashes they face in their new homes. A maid who travelled to the Middle East lured by the prospect of a well-paying job is trapped in the Syrian war. A female ex-freedom fighter immigrates to Canada only to be relegated to cleaning public washrooms and hospital sheets. A disillusioned civil servant struggles to come to grips with his lover’s imminent departure. A young Muslim Canadian woman who’d married her way to California to escape her devout family’s demands realizes she’s made a mistake.

The collection is about remorse and the power of memory, about the hardships of a post-9/11 reality that labels many as suspicious or dangerous because of their names or skin colour alone, but it’s also about hope and friendship and the intricacies of human relationships. Most importantly, it’s about the compromises we make to belong.