The Ontario Book Publishers Organization's What's Your Story? writing contest asked authors across the city to draw inspiration from their local neighbourhoods, translating the vibrancy, diversity, and energy of Toronto neighbourhoods into powerful literature.

We're proud to present the winners from all four neighbours the contest put in the spotlight: Etobicoke, North York, East York, and Scarborough. Open Book will exclusively present the original texts over the coming months, moving from the west end to the east.

Today we start with Etobicoke. Four authors were selected by a jury based on the literary merit of their sample submissions, which were considered without any knowledge of the author's identity. Each winner was then commissioned to write an original piece that captures Etobicoke's essence, however the authors conceived of that challenge.

We're proud to honour these four talented writers: our winners in the Established category Farzana Doctor, Catherine Graham, and Maria Coletta McLean, and our winner for the Emerging category, Transient.

You can see all four winners in person on September 29 at a special What's Your Story event. Click here for more details.

It's not hard to find me.
Get off the rumbling 501 near Fourth,
look both ways,
pass laughter and smoke
puffing from the corner bar.

The seniors on front stoops
will wave you forward as they
lift their chins
to my breeze.
Follow their directions.

Train your gaze straight ahead.
Catch a glimpse of me
through ghosts of
Etobicoke’s alders*
who once guarded my edges.

A sliver of blue
will urge you on
one block, then two
A figment?
Keep walking.

The century-old cottages understand,
they were built for me.
Now they slump
under costly additions,
waiting for the slap of wet feet.

Can you smell me yet?
My damp has been summoning you
from pavement and glass,
carrying whispers
of unfathomable depths.

*The word “Etobicoke” is reported to be an anglicized version of an Anishnabe word Wah-do-be-kaug, meaning “the place where the alders grow”.

My life is more important than my ghost.
The truth — orphan, spinster, Cottage D.
Floating through brick and other strange
appearances. A strangled curtain, light’s trick.
It’s cold being dead, being atoms in all
elements. Rumours of babies, foetus-deep
beneath the old working orchard means
apples and pears have faces. ‘Busiest
haunt in the city.’ Patient-and-staff
never reported sightings. A ghost
is a fold in a slip of mind, frantic
nut of contagion. That fly at your neck.

The Fiat by Maria Coletta McLean

My car was terminally ill; I’d known it for months but I couldn’t let it go. In 2000, it was the “hot” car and my husband Bob had stuck a photo of it on the refrigerator; when he was finished with the surgeries and the radiation, he was going to buy that car. It was a sign of survival and of hope. Bob did buy the car but he only enjoyed it for a year before the cancer returned and killed him. I kept Bob’s car. I kept it through small repairs, and later much larger repairs. It broke down on the highway; it broke down on the side of the road; it broke down in my driveway; but I wasn’t ready to get rid of it.

I’d just moved from the family home to a smaller home in an area of Etobicoke called New Toronto: I’d wanted an affordable house near the water and yet close to the downtown. New Toronto, with its mix of houses, fine old trees, little neighbourhood parks, and independently owned shops, reminded me of the town of Weston where I grew up. My new, smaller house was a solidly built brick house with lots of polished wood trim and several stained glass windows. There was a porch at the front of the house and a clothesline out the back. The backyard was overrun with roses, peonies, and pretty pink phlox. It felt like home and I thought I could make a new life for myself here. So, I’d bought the little house for one and I’d arranged to have a cement pad laid in the front and that’s where I parked Bob’s PT Cruiser; but, increasingly, the car was parked there more and more frequently because it wouldn't start or had another flat tire or needed a new alternator or a new starter or ….

The last time the tow truck towed the Cruiser from New Toronto to the auto repair shop, my mechanic Adam said, “Enough.” I wasn’t sure that I was ready to let go of Bob’s PT Cruiser, so I said, “It's not a good time. I just bought a new house and –” and Adam said, “Maria, new house, New Toronto, new car.”

I started looking at new cars and perhaps, because I was just back from a holiday in Italy, I was drawn to the Fiat 500. It was new to Canada, at the time, compact, good on gas, easy to park, economical, and incredibly cute. I bought a red one.

On the way home from the lot, I stopped at a red light and the man in the car beside mine rolled down his window and began a barrage of questions. “Hey! What kind of car is that? Did you bring it from Italy? Who makes it? Automatic? Air conditioning? How much did you pay? Really?”

This scene repeated itself wherever I went. Getting out of my car in a parking lot, people approached to ask their questions. Same thing when I returned.

One day, I was sitting on my verandah and a man stopped his pick-up and walked up my driveway to check out the Fiat. “Where did you buy this car? Did you bring it from Italy? Who makes it? I’m from Poland and we used to make these Fiats there. How much did you pay?” I answered all the man’s questions but the last one stumped me: “How is it on gas?”

I went back to the dealer where I’d bought the Fiat and picked up some business cards. It’s not that I minded answering all the questions but I figured serious buyers could contact the dealer, get all the answers, and take a test drive. On my way home, I stopped at the LCBO to buy a bottle of wine and I was barely out of the car before a man with a case of 24 under one arm and an open can of beer in his other hand approached.

He started by gesturing with his beer can, “What kind of car is that?” and then went into all the other questions, from mileage to cost, ending with a fresh question: “So, how about a test drive?” I reached into my purse for the dealer’s card but the stranger said, “I’m here and you’re here and the car’s here, let’s go for a test drive.” I said, “I’m on my way to the liquor store.” “I can wait,” said the man. Another man who had parked beside my car and lingered now spoke up. “The lady’s got shopping to do,” he said. “Better move along.” And the stranger saluted with his beer and walked away and I said thank you to the new stranger and I went into the liquor store where I bought three bottles of wine. One pre-chilled.

I was sitting on my verandah, drinking a glass of that pre-chilled wine, when the Polish man in the pickup truck pulled into my driveway. He actually patted the Fiat’s rear end as he came up to the verandah. “Do you remember me?” he asked. “Yes,” I said, “Are you here to see about the Fiat’s mileage?” “No,” he said. “I’m here to see you.” My mind stalled. Forty years had passed since I’ve turned down a man’s invitation. “No,” I said, “Thank you.” The rules must have changed because this man wouldn’t accept my polite refusal. “Why not?” he asked. Of course friends had suggested dating, and I would have liked to share my life with someone, but was I willing to consider dating after seven years of being alone? I said, “I’m not ready yet.”

Since then, the Fiat continues to draw attention. Men still approach me with their Fiat stories. One told me all about the first Fiat he bought in 1964 for his honeymoon trip; another told me that he had a Fiat convertible years ago in Italy and now, on the first warm spring day, he recalls the car of his youth; another pulled up beside the Fiat and beeped and when I looked over, he gave me the thumbs up; the Polish man in his pickup truck still waves when he drives by my house.

I was stopped once at a traffic light and a pedestrian passing in front of the Fiat stopped and tapped on the hood. I looked up and smiled even before he tipped his cap to the Fiat, and to me. Another man in a white convertible pulled alongside of the Fiat and shouted, “Great car! Want to trade?” and I laughed, as he accelerated and continued on his way.

When I bought the Fiat, I didn’t expect it to be anything more than a dependable means of transportation. But the Fiat attracts. It has introduced me to people and their stories of youth and happy memories. It has encouraged me to smile and wave back to strangers. And the Fiat has taught me something more: that in letting go, I can make room for the unexpected and new beginnings.

Just last week, a man on a bicycle stopped beside the Fiat and motioned for me to roll down my window. I did, and he told me his story of squashing six young men into one Fiat 500 and driving from Napoli to Roma to watch a soccer game. I said, “Six men in one Fiat?” He said, “Fiat convertible.”

We Are by Transient 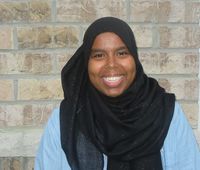 We are not an apology.
We are not your makeshift charity,
your good deed.
We are not the little engine that could.

We are not the rolling boulder
shackling Sisyphus to the hill.
We are the day's end,
the key that held his will.

We are not the beak that pecked at Prometheus.
We are the stolen fire, the night fall, the liver that keeps regenerating.
We are not Athena.
We are the vessel that gave her life,
the strength, the breaking through the skull.

Our dreams are Helen of Troy.
We will send a thousand ships, start wars,
to bring them back, to keep them alive.

We are dreamers.
We will keep on dreaming.
Don't dare try waking us up.

Stay tuned to Open Book for the original, commissioned texts from the winners in the regions of North York, East York, and Scarborough over the coming months!