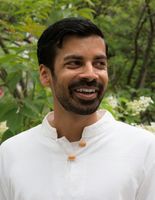 Told through seventeen linked short stories, Toronto author Derek Mascarenhas' debut Coconut Dreams (Book*hug) traces the lives of a South Asian family through a series of shifting voices and timelines, eventually focusing on siblings Aiden and Ally Pinto as they navigate growing up in a primarily white suburb.

An IKEA grand opening plants a seed of distrust between father and daughter; a boy faces a challenge of faith during a fight at school; a brother and sister discover the surprising inner lives of their neighbors during a paper route; a tale of the supernatural set in 1950s Goa, India. Through these interconnected stories, Mascarenhas' warm, mature prose brings to life the relationships, challenges, and joys of his characters, threading together a thoughtful portrait of the Canadian immigrant experience.

We're thrilled to have Derek on board as our May 2020 writer-in-residence. You can check out his posts over the course of this month by heading over to our WIR page. We're excited to read his contributions and we know you'll enjoy them as well.

Get to know Derek a bit more by reading his Writers as Readers interview, where he discusses how his high school reading list nearly turned him off literature entirely, what he read while working on his own book, and why, for him, a re-read is the ultimate compliment.

I was turned off literature by high school English classes, and entirely white reading lists in which I didn’t see myself represented. There are countless books I wish I’d discovered or been exposed to earlier. One that comes to mind—which I think anyone who has struggled with being different in adolescence can relate to—is Funny Boy, by Shyam Selvadurai.

Wayson Choy’s For All that Matters. I loved Jade Peony so much I just couldn’t read the next book. Yes, this doesn’t make sense, but it’s also comforting that there’s a book I know I’ll love, waiting for me.

A book I have re-read many times:

I’m a fairly slow reader, so anything I do re-read is a masterpiece in my books (I think that’s the first time I’ve used the phrase “in my books” to describe a book!). The one I revisit most often is A Fine Balance by Rohinton Mistry.

I found Jenny Heijun Wills’s Older Sister. Not Necessarily Related. utterly moving and written with such grace and care.

I can’t pick just one. Early on, the children’s perspectives and innocence portrayed in Arundhati Roy’s The God of Small Things and Anosh Irani’s The Song of Kahunsha, were inspiring. Jhumpa Lahiri’s Interpreter of Maladies—I believe this was the first book of short stories I read that centered the experiences of POC. Alice Munro’s anything—I could spend years trying to deconstruct her stories. In the year before I began the editing process for Coconut Dreams, I read Carrianne Leung’s That Time I Loved You, and David Chariandy’s Brother. They were also set in a suburb; while geographically on the opposite side of Toronto, and a very different suburb than the one in which my stories takes place, the characters’ voices felt familiar and gave me hope.

To be honest, I’ve had a lot of trouble reading any book since the health crisis began. My first Open Book post this month is going to explore this. The list of books I want and hope to read next is very long—these are a handful that spring to mind:

Desmond Cole’s The Skin We're In

Souvankham Thammavongsa’s How to Pronounce Knife

Derek Mascarenhas is a graduate of the University of Toronto School of Continuing Studies Creative Writing Program, a finalist and runner-up for the Penguin Random House of Canada Student Award for Fiction, and a nominee for the Marina Nemat Award. His fiction has appeared in places such as Joyland, The Dalhousie Review, Maple Tree Literary Supplement, Cosmonauts Avenue, and the Antigosh Review. His linked short story collection, Coconut Dreams, was called a "stunning debut" in Quill and Quire's starred review and The Globe and Mail named it one of the best reads from Canadian small presses. Derek currently lives in Toronto and is working on a novel in the magic realism genre.

Coconut Dreams explores the lives of the Pinto family through seventeen linked short stories. Starting with a ghost story set in Goa, India in the 1950s, the collection shifts to the unique perspectives of two adolescents, Aiden and Ally Pinto. Both first generation Canadians, these siblings tackle their adventures in a predominantly white suburb with innocence, intelligence and a timid foot in two distinct cultures. Derek Mascarenhas takes a fresh look at the world of the new immigrant and the South Asian experience in Canada. In these stories, a daughter questions her father’s love at an Ikea grand opening; an aunt remembers a safari-gone-wrong in Kenya; an uncle’s unrequited love is confronted at a Hamilton Goan Association picnic; a boy tests his faith amidst a school-yard brawl; and a childhood love letter is exchanged during the building of a backyard deck. Singularly and collectively, these stories will move the reader with their engaging narratives and authentic voices.