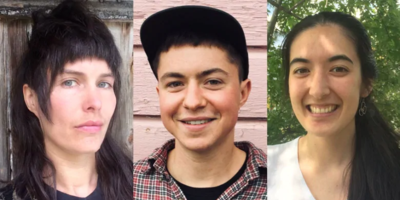 There's something so deeply Canadian about the short story as a form - maybe it's the fact that our first lady of letters, Alice Munro, famously excels at it or simply that its capacity for experimentation, strangeness, and humour, those quirkily Canadian qualities, feels so linked to CanLit as a whole. Somehow, we turn out consistently great short fiction writers.

And one of the most important elements of the Canadian short fiction landscape is the Writers' Trust McClelland & Stewart Journey Prize, which annually selects a shortlist of the most promising and exciting short stories published in Canadian journals and magazines during the previous year, as well as putting together a collection of the longlisted pieces in the form of The Journey Prize Stories.

Without further ado, we're excited to present this year's list of shortlisted nominees:

The stories were chosen by blind submission, with neither the authors' names nor the publications' available to the jury, which consisted of acclaimed writers Carleigh Baker, Catherine Hernandez, and Joshua Whitehead.

This marks the 31st year for the prize, which gets its name from a unique funding situation: the award is made possible by James A. Michener’s donation of his Canadian royalty earnings from his 1998 novel ​Journey​. The winner will receive $10,000, with $1,000 going to each of the remaining finalists, and $2,000 for the publication where the winning text originally appeared.

The winner of the Journey Prize will be announced on ​Tuesday, November 5, 2019​, at the Writers’ Trust Awards ceremony held in Toronto’s Glenn Gould Studio. Seven awards, totalling more than $260,000 in prize money, are presented to Canadian writers during the ceremony.

A little more about the shortlisted authors:

A queer and trans poet and short story writer from Cumberland, British Columbia, ​Kai Conradi​ is currently finishing an undergraduate degree in writing from the University of Victoria. “Every True Artist” is a story about an aspiring artist looking for inspiration in the “aliveness of the desert” who gets less — and more — than she bargained for when she signs up for a residency at a roadside motel. This is his first published story.

Originally from Ktunaxa Territory, Angélique Lalonde, whose mother is Métis and father is Québécois, now lives, writes, harvests medicines, and works as a community organizer on Gitxsan Territory in Hazelton, British Columbia. She holds a PhD in anthropology from the University of Victoria. “Pooka” is the story of a carpet collector who reimagines his family’s fractured history by weaving new tapestries to tell their stories.

From Okanagan Valley, British Columbia, Samantha Jade Macpherson holds a degree in creative writing from the University of Victoria, is an MFA fiction candidate at the Iowa Writers’ Workshop, and is currently working on a collection of linked stories. “The Fish and the Dragons” tells the story of a young Chinese fisherman who makes a magical catch that will change the course of his life.