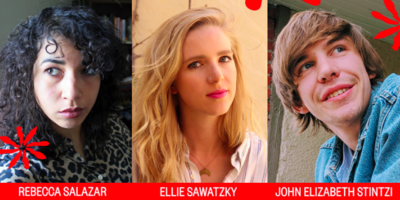 Today the Writers' Trust of Canada announced the three finalists for their award dedicated to celebrating emerging writers, The RBC Bronwen Wallace Award.

The prize alternates each year between short fiction and poetry, with 2019 celebrating poetry and marking a milestone 25th anniversary for the prize, founded to honour the late Bronwen Wallace, a beloved Kingston-based writer of both fiction and poetry.  Open to writers who are under 35 and unpublished in book form, the award is supported by the RBC Foundation’s Emerging Artists Project, which supports artists in the early stages of their career.

The jury, composed of poets Jordan Abel, Sue Goyette, and Emma Healey, read 212 anonymous submissions. The winner will be announced on Tuesday, May 28, 2019 at an event at Toronto’s Royal Conservatory of Music hosted by CBC Radio broadcaster Shelagh Rogers.

The finalists each receive $2,500 and the opportunity to be mentored by an established editor, including feedback on their writing and guidance on their career development.

You can read all the nominated poems via free download exclusively on Apple Books and you can learn more about each of the finalists on the Writers' Trust website.