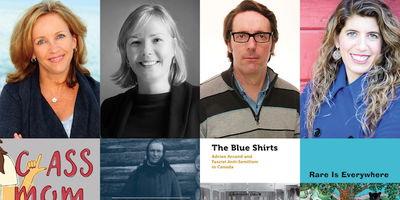 The Vine Awards for Canadian Jewish Literature are a unique set of book prizes; not only do they reward excellence in writing by Jewish authors, they also reward non-Jewish writers who cover Jewish themes in their work. The awards exist to celebrate Jewish values in Canadian literature and the books they reward include deep dives into essential history, comedic writing, cultural, political, and scientific writing, fiction, poetry, and more. 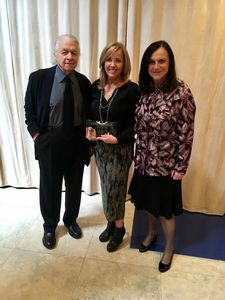 This year the award luncheon took place in the ballroom of the historic Windsor Arms Hotel in Toronto, on October 11. Four awards were presented: fiction, non-fiction, history, and children's/young adult. Jurors Joseph Kertes (founder of the prestigious Humber School for Writers and an award-winning author) and Beverley Chalmers (who won the Vine Award for History in 2016) were present to give out the four prizes; third juror, Lee Maracle, who was recently awarded the Harbourfront Prize, was not able to attend. In his introduction, Kertes emphasized the universality of the nominated and winning books, explaining the prize expanded far beyond a single culture in the literature it celebrates, saying these were "books about the universals... what it feels like to be alive for anyone."

The award winners were as follows:

Jury's comments: “Class Mom by Laurie Gelman is a wonderful, clever, and fun read providing a worthy spoof of today’s parents:  It’s as close to ‘soccer/hockey moms’ in the classroom as you can get!”

Jury's comments: “Julija Sukys’s Serbian Exile is heroic in that it relentlessly unearths a dark and horrid history, even when the crimes she reveals have been committed by her own forebears.”

Jury's comments: “Not enough is known about Anti-Semitism in Canada. It is still endured by many Jewish Canadians and this beautifully written book brings the subject into much needed sharp relief.”

The 2018 Vine Award for Children’s/Young Adult:

Jury's comments: “Fun, exciting and such a different take on difference and diversity for our small children.” 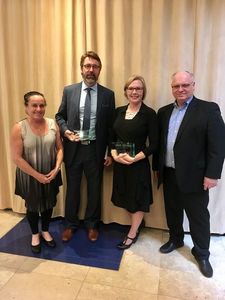 Each of the winners spoke briefly after accepting his or her award. Gelman got laughs from the crowd when she joked that her conversion to Judaism was one of the "top three" things she's ever done, along with having her children and "taking a self-defence class in New York".

Non-fiction winner Sukys took a serious tone, discussing the difficulties of uncovering painful truths about her own family while researching for her Siberian Exile. She shared that she contemplated giving up on the project at one point, before deciding that she "could give into the deep discomfort and fear I felt or I could write the truth". Sukys' grandmother is pictured on the cover of the book, and before exiting the stage, Sukys pointed her out and said she hoped her grandmother was "watching us today".

Blue Shirts author and History category winner Théoret also had to overcome internal and external resistance to his book project, which deals with the history of anti-Semitism in Canada. He persevered, and told the crowd what he said he had told himself and those resistant to the idea of the book: "Canada - and Quebec - is ready for this". 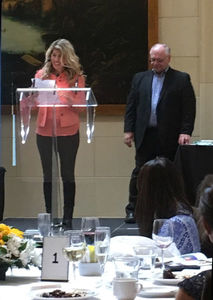 The final winner of the day for the Children's/Young Adult category, Katz gave a prepared speech that alluded to her love of animals as a child, which led to the animals in her winning book Rare is Everywhere. "Judaism teaches that every creature has value," she said, discussing the birds, cats, dogs, ants, rabbits, and other animals she adopted as a young person, and quoted a Jewish proverb that asserts that "everything is created with wisdom".

The Vine Awards also administer a poetry prize that is awarded in alternating years; it will be presented again in 2019. The awards are supported by a generous donation by the Lillian and Norman Glowinsky Family Foundation. The Vine Awards are a loving tribute to Lillian’s parents – Helen and Stan Vine – who were passionate about the arts and the Jewish community throughout their lives. The Koffler Centre of the Arts, a non-profit cultural institution dedicated to exploring modern Jewish identity, administers the awards.