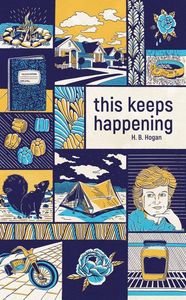 H. B. Hogan's debut collection of stories, This Keeps Happening (Invisible Publishing), is sit-up-and-take-notice short fiction. Assured, wonderfully strange, deftly funny, and totally fresh in both subject and style, the stories are works from a truly creative writer. From self-immolation to eviscerated squirrels, from dangerous dares to doomed cab rides, Hogan's imagination overflows with new, dark, fascinating storylines and spins on the form.

We're excited to have H. B. on Open Book today in celebration of the publication of This Keeps Happening. We asked her to take on our WAR (Writers as Readers) questionnaire, to share the books that have shaped her as a reader and a writer.

She tells us about sneaking her first grown-up read from her grandmother's room, why never re-reading is inconceivable to her, and the book every Ontarian should read.

The WAR Series: Writers as Readers, with H. B. Hogan

I enjoyed all the usual stuff enjoyed by suburban kids in the early eighties. I’m not sure I could pinpoint the first one. But the first book that I actually found on my own (meaning, I wasn’t led to it by a teacher, parent, or librarian) was Killing Mr. Griffin by Lois Duncan. It set off a chain reaction of eye-opening self-analysis. I thought, why have I been wasting my time in Narnia and Oregon with Aslan and Ramona? What else have I been missing?

The Colour Purple, by Alice Walker. Perhaps not the most appropriate introduction to adult literature, but extremely effective. I was nine or 10 years old. I found it in my grandmother’s bedroom. I knew I wasn’t allowed to read it – I think I might have been told it wasn’t for kids, which incensed me – so I snuck into her room and read it in bits, over the course of several visits. Very early on in the book I realized why it wasn’t for kids, and I knew I was in over my head, but I kept at it. When I emerged on the other side, I felt world-weary and decrepit. But I somehow loved books even more – you could live whole other lives, it seemed. You could learn what no one would ever teach you.

The Cloaca by Andrew Hood. Repeatedly.

Too many to list. If I like a book, I’ll re-read parts of it or all of it many times. Whether to try and figure it out, or to savour it, or if enough time has passed it can be fun just to re-read so you can revisit the period of life in which you read it the first time. I’m re-reading The Corrections by Jonathan Franzen, which I already re-read once immediately after finishing it 14 years ago. It’s even better 14 years later. I recently learned that some people don’t re-read books. I was stunned. That’s like listening to a great record only once. Inconceivable.

Anything by Chekhov. Don’t tell anyone that I haven’t read him, though.

The Speed Queen by Stewart O’Nan.

The Burned Children of America, a short story collection introduced by Zadie Smith. It was a spur-of-the-moment purchase a lifetime ago in She Said Boom, but it’s been my stalwart go-to for years whenever I need a jolt of inspiration. "Incarnations of Burned Children" by David Foster Wallace still floors me despite infinite re-reads. The way he expanded and contracted time and completely shifted narrative focus at the end. "A Real Doll" by A. M. Homes opened my eyes to the permissive cloak of young imaginations for subject matter that would otherwise be off limits. "I Can Speak" by George Saunders, with its depiction of truly pathetic consumerism. Another important story for me, also discovered by chance in another anthology, was "Bullet in the Brain" by Tobias Wolff. He played with time, too. In doing so he revealed a surprising but direct link between wonder and misanthropy. To my chagrin I can see very clearly the influence of those stories in my book.

Queen Solomon by Tamara Faith Berger (thank you, SKR, for the recommendation).

Motherhood by Sheila Heti. I was doubtful about the subject matter but read the first few pages in the book store and loved it – her form, her inner dialogue, her sense of humour (thank you, SMS, for the recommendation).

(non-fiction) Seven Fallen Feathers by Tanya Talaga. When every Ontarian has read it, I’ll tell you my go-to for fiction.

H. B. Hogan lives in Toronto. Her fiction has been published in Taddle Creek, THIS Magazine, and subTerrain. She has a chapbook with Proper Tales Press. Her work has been acknowledged by the Ontario Arts Council and the Toronto Arts Council.

A bush party leads to self-immolation. A cab ride ends in warfare. A squirrel is eviscerated. A universally impossible dare is accepted and proves not to be fatal. The weird kid triumphs. The stories in H. B. Hogan’s debut collection sizzle like butter on hot cast iron—they’re rich and dark and full of scrappy, sordid and sparkling humanity.