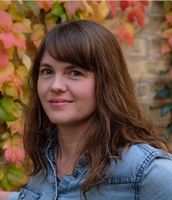 There's no age limit on creativity, and yet there's often an assumption that the most innovative and vital work comes from the young. Bestselling author and journalist Emily Urquhart doesn't buy that reductive view, especially after watching her father, the acclaimed painter Tony Urquhart, continue to create, innovate, and grow as an artist well into his 80s.

The Age of Creativity: Art, Memory, My Father, and Me (House of Anansi Press), Urquhart's newest book, is part memoir and part exploration into the myth that age and creativity have any bearing on one another. Filled equally with poignant father-daughter moments and eagle-eyed research, it's both moving and timely. As we examine the role of ageism in the arts and how we can move beyond a limiting dichotomy of youth vs. age, Urquhart posits a world where creativity is instead a life-long process and delight.

We're thrilled to welcome Emily to Open Book today as part of our My Story memoir interview series. She tells us about the ethics and anxiety of writing memoir, learning to write anywhere, and dog walking as literary therapy.

This began as a big idea book and, along the way, became a memoir. The big idea remained central to the core of the book—and that is that aging and creativity are not at odds—but memory, both my memories from childhood and young adulthood, as well as my father’s memories from his past became a larger part of the narrative than I’d expected. The biggest revelation I had while working on this book, which came about through speaking with my father, and with all of the older creative people I interviewed for the project, is that you simply cannot ignore the past and focus only on the present. Your past inhabits your present. It informs everything we do and this is why art created by older people is so layered, complex and engaging.

I write in the attic of my home, and it’s nestled into the treetops so feels a bit like a kid’s playhouse. My husband made me a lovely perch up there with built in book shelves that line the walls. This is where I like to be during the research phase of writing. I relied on a lot of art history texts to write The Age of Creativity and these are often enormous, so it’s best to stay in one spot while referencing these books. That said, I can also write anywhere—on public transportation, during meetings when I should be listening to the speaker, and, in a pinch, while my children are fighting on either side of me. I think it’s my background as a journalist, having worked in busy newsrooms, that helps me avoid being too precious about where and how I write.

If nothing is working, if I’m feeling stressed or discouraged, or, as often happens during a large writing project, I feel as if the book is a terrible idea and I’ll never get to the finish line, I walk my dog, Owen. We have walked our way through two books now. A substantial walk can be fruitful, but sometimes fifteen minutes is all it takes to work out whatever problem I’m facing with my text. Of course, this is great for the dog, too.

You almost need to ignore the fact that people will read what you’ve written, at least while working on the first draft. It’s only after that draft is finished, or maybe a few drafts in, that you can let those other voices enter your thoughts. At least the important voices, the voices of those you truly care about and want to keep in your life. As a new student of folklore, the first thing our department head told us was: First, do no harm. This statement is associated with medical students, but as folklorists we would work directly with people, recording their stories, asking questions, sometimes even living with them and their families, and so it makes sense to begin from that position. I’ve carried this directive with me since. Sometimes the work warrants an exposure of your flaws and the flaws of others, but this will be a necessary layer and enrich your story if you start from a position of good intention.

Last summer, as I was in the final push to finish my book, I listened to the audiobook version of Just Kids, by Patti Smith, which she narrates herself. Listening to this work, I felt transported. I can’t say what this experience would have been like had I read the book rather than listened to Smith’s mesmerizing drawl, but I suspect much the same. Her narrative voice carried me away and with memoir, even if the story is explosive or salacious or suspenseful, if the voice falls flat, the story also deflates. Luckily, there have been so many great voices in memoir lately. For example, Therese Marie Mailhot’s, Heart Berries, which was structurally, unlike any other memoir I’d encountered and all the more beautiful for it. You sort of float through that book. Similarly, Birds, Art, Life, by Kyo Maclear was an ethereal read with an innovative form that worked together with the ethos of the book. Elizabeth Hay’s memoir about her elderly parents, All Things Consoled, brimmed with perfect paragraphs. Bridget Quinn’s Broad Strokes: 15 Women who Made Art and Made History (in that order), incorporated elements of memoir into a work of art history and this was a revelation, and (refreshingly) the opposite of how I’d been taught to write about art during my undergraduate degree in art history. I can’t say exactly how each of these works inspired my own, but I do know that I learned a lot from each one.

Emily Urquhart is a National Magazine Award–winning writer and has a doctorate in folklore from Memorial University of Newfoundland. Her first book, Beyond the Pale: Folklore, Family, and the Mystery of Our Hidden Genes, was a Maclean’s bestseller, a finalist for the BC National Award for Canadian Non-Fiction, and a Globe and Mail Best Book of 2015. Her freelance writing has appeared in the Toronto Star, The Walrus Magazine, Longreads, the Rumpus, and Eighteen Bridges, among other publications. She is a nonfiction editor for the New Quarterly and teaches creative nonfiction at Wilfrid Laurier University. She lives in Kitchener, Ontario, with her husband and their two children.

The Age of Creativity: Art, Memory, My Father, and Me

A moving portrait of a father and daughter relationship and a case for late-stage creativity from Emily Urquhart, the bestselling author of Beyond the Pale: Folklore, Family, and the Mystery of Our Hidden Genes.
“The fundamental misunderstanding of our time is that we belong to one age group or another. We all grow old. There is no us and them. There was only ever an us.” — from The Age of Creativity
It has long been thought that artistic output declines in old age. When Emily Urquhart and her family celebrated the eightieth birthday of her father, the illustrious painter Tony Urquhart, she found it remarkable that, although his pace had slowed, he was continuing his daily art practice of drawing, painting, and constructing large-scale sculptures, and was even innovating his style. Was he defying the odds, or is it possible that some assumptions about the elderly are flat-out wrong? After all, many well-known visual artists completed their best work in the last decade of their lives, Turner, Monet, and Cézanne among them. With the eye of a memoirist and the curiosity of a journalist, Urquhart began an investigation into late-stage creativity, asking: Is it possible that our best work is ahead of us? Is there an expiry date on creativity? Do we ever really know when we’ve done anything for the last time?
The Age of Creativity is a graceful, intimate blend of research on ageing and creativity, including on progressive senior-led organizations, such as a home for elderly theatre performers and a gallery in New York City that only represents artists over sixty, and her experiences living and travelling with her father. Emily Urquhart reveals how creative work, both amateur and professional, sustains people in the third act of their lives, and tells a new story about the possibilities of elder-hood.