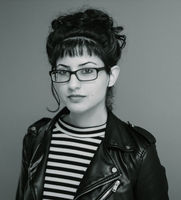 One of 2018's most notable poetry debuts, Shazia Hafiz Ramji's Port of Being (Invisible Publishing) is current, smart, and fresh, pulling vocabulary and tensions from urban environments, social media, and online life.

Concerned with privacy, voyeurism, and the future, the collection's questions are haunting and large-scale, but rooted in the personal. With a keen eye, the poems here interrogate identity and intimacy in a world dominated by concerns like surveillance, globalism, migration, and more.

We're excited to announce that Shazia will be part of the Open Book crew this month as our March 2019 writer-in-residence!

If you don't already have the pleasure of knowing Shazia and her work, you can get to know her here as she shares about her experience as a debut poet, from the terrifying to the electrifying. She tells us about the anxiety of the book launch, recounts one very uncomfortable plane journey, and gets real about the issues facing MFA programs.

Stay tuned to Open Book's writer-in-residence page this month to hear from Shazia!

My first professional publication ever was CV2. This was around 2011. To celebrate, I stepped outside for a ciggy and cried silently while a coyote walked by. I told no one.

The launch for my first book, Port of Being, took place at Massy Books on October 3, 2018. I’ll always remember the date. I was terrified no one would come to the launch. I spent the days before the launch cooped up at home, because I was so worried about what I was bringing into the world and whether any of it made sense. In the days leading up to the launch, I was very calm, gracefully accepting that launch day was arriving. But at night, when I was alone, before going to sleep, I’d get tearful and overwhelmed with gratitude every time I saw that someone had tweeted or shared the post about the launch, or said how excited they were. It was overwhelmingly emotional. I was in disbelief that I would be able to speak at all when the day came. And then I was in disbelief that I had written a book. (When I received the book in the mail, I was terrified for a couple of days. Only after some days passed I felt deliriously happy.)

But the launch happened and I didn’t die!

I couldn’t have imagined how sweet and kind people are — they came out on a Wednesday night to celebrate my book! Launching at Massy Books with an entire room full of people I knew personally, didn’t know much, and didn’t know at all... it was really something. It felt like a homecoming. Being at Massy was also magical. I feel that I’ve moved in the city and grown along with the bookshop. It feels like a part of my life now, if I can say so. I’m so grateful for the space Patricia Massy has made for many of us.

Recently, I was on a flight to Toronto and I had a brief conversation with the woman seated next to me. During the last half of the flight, she asked if she could read some of my work. I pulled out my book from my backpack and let her flip through it while I pretended to surf the "well being" music channel on Air Canada. I saw her gravitate towards "Poem Beginning with Falsehood," which is a very candid poem that involves sex, masturbation, and addiction themes. I didn’t see her reaction while she was reading it, but after less than a minute, she gave me back the book, smiled a very quick smile, buckled her seatbelt and turned away from me. She didn’t talk to me for the rest of the flight. Thankfully, Leon Vynehall’s new album was in the "well being" section, so I made it through.

I had the honour of being on stage beside Dionne Brand at the Vancouver Writers Festival this year. I was trying not to stare at her while I was seated beside her. She was wearing these perfect two-tone colour-block socks in red and beige, and she was so composed but alert. Then she spoke. And then I made some sounds that sounded like speaking.

I’ve worked in-house in publishing and have guided authors through the publishing process to prepare their book for print. So, I didn’t think I would get anxious. I did. My perfectionism really reared its head, to the point that it was debilitating and I couldn’t sleep.

I worked closely with my publisher, Leigh Nash, to finalize Port of Being for print. She responded to all my anxious emails and reassured me many times. I don’t know what I would have done without Leigh. Her care, guidance, and vision is unparalleled. I stayed with her and her family (her partner is the poet, Andrew Faulkner!) in Picton during my Ontario book tour in November and visited her class at York University in Toronto too. I have such fond memories of her and am so grateful to have had this good experience with Leigh to guide me.

I wish someone had told me that the days and months leading up to publication would be a terrifying, anxiety-filled experience only made worse by self-doubt and sleeplessness. Thankfully I’ve had darker nights of the soul, so I made it through, but it was honestly quite rough.

Publishing underrepresented and marginalized voices is quickly becoming a publishing trend, but to avoid being tokenized, think carefully about being with a publisher who will support your work by being willing to create a conversation to support it.

It’s also easy to forget that publishers want you just as much as you want them. Don’t sign with someone who won’t pay you. Publishers who don’t pay authors often rely on prestige and reputation as a reason not to pay. It won’t be supportive or healthy in the long run.

And, when you send out your work, send it with a sense of trust in your self-worth and ability. If you’ve done good work, these feelings will come naturally.

Most importantly, don’t listen to people like me. Your work will guide you, seriously.

"MFA vs. POC" by Junot Diaz

"Report from the Field: Racial Invisibility and Erasure in the Writing Workshop" by Lisa Lee

Shazia Hafiz Ramji’s first book, Port of Being (Invisible Publishing), received the Robert Kroetsch Award for Innovative Poetry and was chosen by CBC as one of the best Canadian poetry books of 2018. Her fiction and criticism have appeared in The Humber Literary Review and Quill & Quire, respectively. She will be a writer in residence with Open Book in March 2019. She lives on unceded Coast Salish land (Vancouver) where she began the Intersections Reading Group and where she works as a publishing consultant and editor for various presses across Canada.

Winner of the 2017 Robert Kroetsch Award for Innovative Poetry

Voyeurism and fact go head to head in Port of Being, a debut book of poetry that mines speech from the city streets and the internet. These are poems set firmly on the threshold of the private and public, the future-haunted and the real, forging the human adrift in a terrain of space junk, drones, and addiction. Port of Being speaks just in time, navigating the worlds of surveillance, migration, and money, only to carve a way into intimacy and connection.