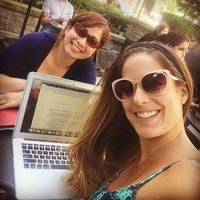 I feel like I’m the opposite of many writers. Outgoing and gregarious in the real world, I have a hard time making friends online. I love meeting new people face to face, but virtually-speaking, I’m somewhat shyer about it all,  though I have met some great people online through past publishing experiences.

My writer friends have gotten me through some stuff, stuff that other people (partners included) might roll their eyes at. (Not that they don’t have a right to, us writers be crazy.)

You don’t need a ton of scribal allies, just a few goods ones. Here are my five reasons why.

1. Motivation: Have no deadlines? Don’t feel like writing? Well, you don’t really have to do your 500 words today…. Being accountable to another person for a few pages each week or month can do wonders for your productivity and developing a writing habit. The whole getting words down on paper or screen is kinda necessary if you want to write. (WHY IS IT SO HARD?!)

2. Editorial Assistance: Writer friends are great beta readers. They can spot plot holes or underdeveloped characters first, which can be crucial before sending your work to an agent or editor. I can sniff out a dropped storyline like a dropped french fry under the table. (We don't have pets so I’m pretty much a human green bin for food that doesn’t make it into my kids’ mouths. Particularly french fries). Find writer friends who are in similar stages of their career if possible. They don’t have to write the same genre, but that can be a bonus.

3. Someone to Bemoan the Life of a Writer With. Misery loves company. Not that being a writer is miserable, I’m happy I get to do what I love. But I also have to do like, four or five other things to be able to do what I love. And be okay with other things, like not owning a house or a car. Listen, Newbies, it is a tough slog. According to a recent report from the Writers’ Union of Canada:

“Canadian writers are making less money than ever — with incomes from writing dropping 78 per cent from 1998, according to a report released Monday by the Writers’ Union of Canada. The numbers, accounting for inflation, have been undergoing a steady drop. According to the report, writers made $9,380 in 2017, down from $12,879 in 2014 — a 27 per cent drop in just three years.” – The Toronto Star

4. To Plot the Excruciating Demise of Mean People who give you bad reviews because of a ridiculous reason like oh, I dunno, they don’t like romance novels (and you write romance novels). Really?! Read another fudging book then. I’ve been fortunate that all my reviews from real people/critics have been wonderful. But for some reason, we writers don’t care about that. We care about the 22-year-old troll who makes her review deliberately nasty so her comment will get lots of likes, which raises her profile. Never mind that she sounds slightly cray-cray, she’s blasting you and your work for a ridiculous reason and she’s totally misrepresenting it and how can someone adequately review forty-five books a week anyway, not to mention all her followers liked it because it was snarky and now that review will always be the first review anyone sees when they look up your book and... Wait. BRB... Need to call a friend. (Also, unless you have an ego of stone do NOT go on Goodreads. I am a fragile creature, who for the sake of my mental health, avoids that site like an all-you-can-eat buffet. Because I will eat that fourth brownie).

5. To Celebrate the Victories! While having a writer friend is great because you get to complain to someone who gets it, it’s even better when either of you has something to celebrate! Or to take road trips with! Because if you’re hauling your cookies out to Whitby to sell some books but it’s raining and no one shows and you only sell two copies, you need someone else there to commiserate with. And to split the gas money.

Of course, there are many many more reasons to start cultivating writing buddies. Maybe you already have some or maybe you’re just starting out on your writing journey. If so, attend workshops, go to conferences, go support other writers at book fairs and launches, introduce yourself, buy their book. (Seriously, you spend $12.99 on a paperback for me and I will throw down for you). Also: online! There are so many Facebook groups for published and indie authors who write across all genres; join some.

So don’t be shy! “‘Cause you gotta have friends…” (Anyone else picture Donkey from Shrek singing this and not Bette Midler? If so, I think we'd be good friends).