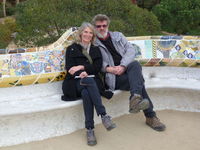 Ten years ago, Tim and I decided to step sideways.

I was Artistic Director of a theatre school for children and youth. I was dedicated to the job, but it was completely wearing me down. Tim was teaching and writing full tilt. We both needed a chance to recharge and replenish.

Of course, there was no money to fund a “sabbatical.” We’ve never made much money and didn’t have any saved. But we reasoned that we’ve always been able to pay our bills. We had a large line of credit available. It might take a few years to pay it back, but we’d deal with that later.

We decided we’d go to the UK and Europe and visit any family or friends who would put us up. We’d let the winds take us where they would. We set off on August 1, 2011, for our grand European tour –– a kind of gap year for grown-ups.

I don’t entirely agree with Socrates that “An unexamined life is not worth living.”  But when we started on the trip I decided to start a blog. I didn’t know much about blogging then, but I thought it would be a good way to let friends and family know where we were and what we were up to. Stepping Off the Treadmill also became a way for me to put some structure into my days.

Of course, the irony of this is not lost on me. I had needed to get away from the structure of a job and the daily grind. Yet the first thing I did was to impose some structure on myself. The difference was that there were no expectations put on me other than what I put on myself. I dove into researching the history of every place we went. I took photographs and thought about how to capture what I was seeing. I wrote up recipes of things we ate. There was a wonderful randomness about it all.

My posts were much too long, that didn’t matter. I was having adventures and writing about them. Observing and examining. Shining a light on nooks and crannies. I’ve written elsewhere that I didn’t think of myself as a writer, and yet here I was writing several thousand words a week on topics as wide ranging as the sustainable fishing movement in Loo, Cornwall, the Escargot Festival in Digoin, the Pembrokeshire coastal path, seeing La Traviata in a crumbling Palazzo in Venice, or touring a U-boat in the Wirral Peninsula. Writing the blog was turning me into a writer. I wrote with a freedom that I haven’t felt since.

Being asked to write blog posts for Open Book re-opened a place in me that writes purely for pleasure. Normally, there is always something pressing –– a draft, an edit, a blurb. There’s always other work that needs to be done. But writing these posts has helped me reconnect with the sheer pleasure of writing. I’ve allowed myself to bounce around on different topics without a lot of planning. I gave myself space to play with words.

This month of being Writer-in Residence has been a validation, an opportunity to explore new thoughts, and a rediscovery of who I am as a writer and a person. As I say, I don’t entirely agree with Socrates but for me, for the person who I am, spending a bit of time examining my life has made me realize just how rich and worth living it is.

To those of you who have been with me on this particular journey, thank you for being my hosts and companions. Thank you for giving me a reason to step sideways again.