One of the important exercises we do in theatre is called “What’s Beyond.” It’s a Viola Spolin exercise to help actors understand the full, inner life of their characters. Viola Spolin is credited with creating Theatre Games. She wrote the book Improvisation for the Theatre, a book that I come back to frequently when I am stuck in my writing.

In “What’s Beyond” you walk across a stage. That’s it. You have to decide where you are coming from and where you are going. But all you do is cross the stage. You don’t try to tell the story of where you have been or where you are going. You just cross with that knowledge. It’s about being minimal and internalizing intention and having a point of concentration.

It's an exercise I try to use when I’m writing. It’s more than writing a “backstory” for a character. It is knowing that when they come into a scene, they are coming from somewhere. They are walking onto the stage to go somewhere else. It is a part of living the fulness of their lives, not just what is seen “on stage.” It is a part of realizing the uniqueness of each character. Everyone comes from a previous scene. Everyone is heading somewhere after the scene they are in.

I have watched really good actors in rehearsal, watched them spend weeks on experiencing moments with their character, moments that aren’t found anywhere in the script. What the audience sees on stage is the result of a long process of living in someone else’s skin and knowing it intimately. Done well, the audience will be transported into the life that has been created. They will believe in the reality of that life. I think the same is true for a reader. There may only be the smallest trails left from a “What’s Beyond” exercise with written characters, but what’s there helps to give substance and life beyond the page.

My first novel, September 17, is based on the true story of the sinking of the S.S. City of Benares during the Second World War. There were 100 children on board the ship, who were being evacuated from England to Canada, and all but 13 perished.

It was a hard story to write, for all of the obvious reasons. The loss of so many young lives is almost unbearable to look at. When I first read about the disaster, I thought I would just walk away from the story. But I wanted to honour those who died, as well as to tell the dramatic story of the survivors. And the best way to do that was to give them new life by telling their stories. I wanted to give them a voice. 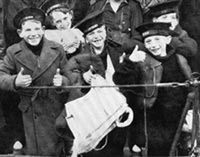 Some of the survivors from the sinking of the S.S. City of Benares

It was a large cast, but I found out as much as I could about the children –– those who survived and those who died. I used their historical information as I would a backstory for any role I would play on stage. But then I needed to make each child an individual. I invited them to “come into” my body. I explored the sensation in my vocal cords and my face muscles as I adjusted to different regional speech patterns. I felt the different sensations of age and size as I left parents and family behind. I walked onto the deck of the ship as a five-year old, as a thirteen-year-old, as a fifteen-year-old. I felt their joys, lived their fears.

It was an emotionally wrenching process because I knew where the story was going. I wanted to stop them from getting on that ship, but I couldn’t.

In the end, I could only listen to them, be them, for time there were there. But by physically going on the journey with them, I was able to give them another life. They couldn’t all play starring roles –– it was a large cast –– but I knew that even if they just walked across the stage, going from one scene to the next without much notice, they still would have their own, unique story.