Write what you know. It’s an adage you are always told as a beginning writer. 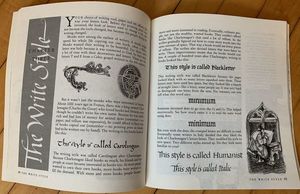 My first book was definitely written because of what I knew. I had been teaching a studio course on the development of Western letterform at the University of Waterloo. The course was an historical survey that looked at how societal changes affected the look and construction of letters and books. At the time I had young children, and it was natural for me to teach them about letterforms as they began to learn how to read and write.

I hadn’t written a book before but realized I wanted to share what I knew with young people. I wrote Writing: A Fact and Fun Book (Kids Can 1992) because I cared passionately about the subject.

Writing was followed by Lettering (1996), Making Memory Books (1999), and The Jumbo Book of Paper Crafts (2002) All of these craft and activity-based books were written about what I knew. Rosie Backstage (1994), co-written with Tim Wynne-Jones, was about the other thing I knew –– theatre. My undergraduate degree was in theatre performance, and Tim and I met when I was working backstage at the Stratford Festival.

Five books written from what I knew. But I didn’t think of myself as a writer. I lived with a very successful children’s book writer, and I could tell that our processes were entirely different. He “invented” things. I could see that those things were based, somewhere, in what he knew. But they were so much more. He was a writer. I was just writing what I knew.

I am in the Imperial War Museum in London, England, seeing an exhibit called “The Children’s War.” The exhibit was about how children lived in England during the Second World War, a topic I knew very little about. I have made a career working in the arts with young people and I am endlessly interested in seeing the world from their perspective. But I knew virtually nothing about the Second World War in England.

Toward the end of the exhibit there was a photo of a group of young boys standing on the deck of a ship, grinning, thumbs up. The caption was “Children Return from the Dead.” Tantalizing. My curiosity piqued, I had to find out more. Thus began a four-year project researching and writing about the sinking of the S.S. City of Benares, a project that resulted in my first book of historical fiction September 17 (Red Deer Press 2014).

Turns out, I love research. Research is a way to embrace what you don’t know and make it yours. I hadn’t set out to write a book, certainly not a book of fiction, but as I learned about the children on that boat, I had to write about them. I was writing from a place of not-knowing, which gave an energy to my early drafts, and to my entire outlook, that was new to me.

But there were some things I did know that went into that book. I knew a child’s excitement to leave home and head out on an adventure. I knew a child’s reluctance to leave a parent. I knew a child’s fear in a dangerous situation. I wrote from what I knew about life at the same time as writing what I didn’t know about this disaster story.

I was becoming a writer by drawing on the thrill of discovery as I dug into what I knew about myself.

My new book These Are Not the Words is considered “semi-autobiographical” because it uses some real people, places and situations that happened during my childhood. But in the process of writing I learned new things, almost as though I had been researching myself. Writing the book involved revealing what I knew to myself. I certainly didn’t start off knowing what was in my mind. It was a blend of writing what I knew and writing what I didn’t know.

Melding discovery with understanding is much more complicated than “write what you know.” I dismissed my early books in my own mind because they were just “what I knew.” I didn’t look at what I was bringing to the process, which was the part of me that I didn’t know at the time, the part that needed, passionately, to share a love of letterforms with young people. I wrote what I knew but looking back I can see that those books actually were a blend of knowing and not-knowing. I wish I had understood that at the time and stretched myself out to explore the ideas with my readers, instead of writing to them.

Merely writing what you know does not lift your work off the page. Writing what you discover on the journey of writing, what you know AND what you don’t know, invites your reader to share in the process. These days, when we all need more connection to each other, that’s a pretty irresistible invitation.