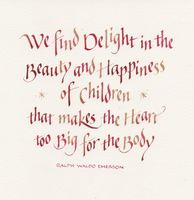 The word calligraphy comes from the Greek. Kali, meaning beautiful, and Graphos, meaning writing. Beautiful writing. It’s a term that was coined after the invention of the printing press, after the age of scribes, to refer to the study and practice of creating beautiful, well-proportioned letterforms.

Handwriting is fairly easily learned by an eight-year-old. It can be comfortably mastered in a few months. Calligraphy, like any complex craft, requires that famous 10,000 hours to master.

The letterforms that we use today, the ones I am busy hammering out on my keyboard, look the way that they do because of political and social movements that took place in the hundred years before the invention of the printing press. Early Renaissance scribes believed that to be a “man of letters”, that is, someone who was literate, knowledgeable and a writer, you needed to be able to write those letters beautifully. They studied lettering done in the court of Charlemagne in the eleventh century, gleaning their ideas of classical beauty from that earlier Renaissance. They analyzed what made those letterforms aesthetically pleasing. Then they sought to reproduce them in their own work. They hand-lettered their novels, poems and philosophical treatises with care.

I was lucky enough to study calligraphy with some of the masters in the field –– Hermann Zapf, Julian Waters, Alf Ebson –– in the days before personal computers, before everyone had “beautiful writing” with the tap of a keyboard. I put in my 10,000 hours hand-lettering names, dates and achievements on hundreds of thousands of certificates for companies like IBM who wanted to celebrate their employees.

Calligraphy is slow work. The moment you rush you make a mistake. When you make a typing mistake on a computer, you swish it away with the stroke of a key. Mistakes on vellum have to be carefully corrected. It takes time and care, and sometimes makes it worse. With mistake on paper you usually have to start over.

But the slowness is part of the appeal. Lettering names can be a Zen-like experience. You enter into a zone where your attention to detail is heightened. You feel the paper through the nib. You work with the pressure you exert. You exhale on the curves and strokes, inhale as you lift from the page. Your mind sees how the letters will combine. You anticipate the space between letters (intraspace or kerning) and the space inside of letters (counter space), trying to create an even rhythm of line and space.

Because of those 10,000 hours, and the many hours put in since then, my relationship to words is visceral. My word choices are guided not just by meaning, not just by sound, but also by visuals. For example, I'm hyper aware of the difference between the name Magda and the name Michelle. Magda has round counters, bumping up against each other, so the intraspace has to be reduced. It has ascenders and descenders, and repetition that gives it a well-defined rhythm. Michelle has many straight lines, which require more intraspace. The ascenders are balanced by an open c and repeated open e’s. In fact there are no closed letters and it reaches upward only.

It’s hard not to anthropomorphize these two –– Magda, round, calm, balanced between highs and lows, generous inside each space, ignoring rules of social distance; Michelle upright, balanced, seeing above everyone, open to ideas, careful to keep a distance.

Perhaps after 10,000 hours I’m allowed to be a bit fanciful.

But then again, there’s a lot of information that your brain takes in, judgements that you make on a subliminal level, that play into your interpretation of a piece of text. On a very basic level, word choice can elicit an emotional response that affects the reader’s connection to the piece.

Ursula LeGuin, in her essay Collectors, Rhymesters and Drummers, talks about the beauty of writing.

“…words, whether in poetry or prose, are as physical as paint and stone, as much a matter of voice and ear as music, as bodily as dancing.” [The Wave in the Mind, 2004]

LeGuin’s focus is the rhythm of writing on the sentence level. She talks about the visual rhythm on the page and within each paragraph and sentence. I think if she’d had a chance to learn calligraphy she would have gone deeper, she would have seen the dance between each letter. You don’t have to be a calligrapher to experience the dance. You can rediscover the dance between a writer and reader every time you pick up a pen and create a word –– an idea that exists in your mind –– and magically leave it on a piece of paper for someone else to read.