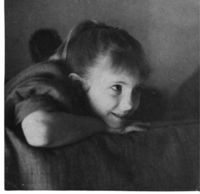 I use photographs as a starting point for writing. Maybe that’s because my writing is historically based. But it’s also because I am interested in starting from a real person and spinning off into fiction. I need an anchor in the real world.

Not me. I start with a picture from life.

As I’ve mentioned in a previous post, I wrote my first novel because of a picture I saw at an exhibit in London, England called The Children’s War. My second novel, The Pact (Red Deer Press 2015) was inspired by a story that my neighbour Hans told me about his life. I was really drawn to the story, and to the idea that it would give me an opportunity to present the “other side” of war and look at the lives of German children during WW2.

Hans had a collection of photographs. When he was a boy, he had been given a Brownie Camera, so he took snapshots. Miraculously, those prints still exist. The photos showed me Hans as a boy at summer camp, –– Hitler Youth Camp. They showed me Hans evacuated with his school to Nuremberg and on a day trip to a rally. The photographs helped me to quite literally see the world through his eyes. The world that I was delving into was so incredibly foreign to me, but these photos gave me a way into Hans’s life. I spent a whole summer interviewing him but it was his photographs that gave me the belief that I could tell the story.

For These Are Not the Worlds, I had family photographs. My father was a professional photographer and took his camera everywhere. I have prints of photos he took of Ray Charles and Miles Davis. I have prints that he took of John and Robert Kennedy and Edward Muskie at the Democratic Convention in 1960.

But mostly what I have are photographs of me as a baby, a toddler, and a five-year-old. Me, my mother and their friends in New York.

You’d think that in writing a semi-autobiographical novel, I would know what the world I was writing about looked like. You’d think I could see the world through my own eyes. But the world that I wrote about happened when I was five years old, and frankly, I have few memories. So, I poured obsessively, forensically, over these photographs, trying to see what I saw as a child.

But I found that the photographs didn’t show me my life. Sure, they gave me context and setting. But with the exception of two photos that I took of myself with a timer, the photographs were through my father’s eyes. Suddenly I realized that I was seeing into his mind. It was a major turning point in my writing. The book stopped being about Missy (the protagonist) and became about the relationship between her and her father.

Working from photographs gives me a way to get into the heart, mind and unique vision of the photographer. They are a way to transform myself and begin to live in a new story. I’m anchored, and don’t worry about “making stuff up.” Stuff comes on its own.