I like to draw, and collage, and paint with watercolours, and glue bits of lichen and bark I find in the forest onto the things I draw, collage and paint. Sometimes I make a painting and then I cut it up and use those pieces as weft to weave things into, or cut them into random shapes to become parts of other paintings. I often begin with painting, then draw textures into the painted shapes, and then move onto cutting after if feels that I have added as much as seems reasonable. Then the process of gluing begins. Sometimes followed by more painting and more drawing, or more cutting of shapes from old magazines or books.

I like to imagine the worlds that get created this way as akin to the communities that find me in the forest — moss communities and lichen communities at the minuscule level, and then larger communities of trees, bushes, understory and underland through which various creatures travel or live out sedentary lives. Mishmashes of colour, texture, moving water, and breath.

When I knew Glorious Frazzled Beings was going to be published I very much wanted one of my own creations to appear on the cover because my visual work is interconnected with my writing. Sometimes the work is directly connected, as in the image that appears on the cover of the book is a close-up segment of a larger collage called Fox Dreams that I created in relation to two linked stories in the book: “Ropes of Entropy,” and “Her Unspoken Name.” And sometimes the visual work is connected not exactly to the narrative, but in terms of themes, feelings, or ideas I am exploring in the written work that need to be worked out through other creative forms in order to evolve my relationship to understanding or integration. And sometimes it’s just plain fun, curious, and funny to cut things out of old books and magazines and then paste them elsewhere in relationship to things they were never intended to be in relationship to. In other words, it’s a way I like to play.

I watch my children play with their toys and pretty much any object they find that is interesting to them in this very same way — making up worlds, working out feelings, incorporating their life experiences through their imaginations. I feel blessed to be made privy to watching those imaginary worlds burgeon and flourish all over the house  — though not always blessed to have to round up the toys or round up the children to round up the toys and put them back in their places after the games are over. Sometimes I wish I had a space where they could create these worlds and let them evolve however they wished without my having to intervene to impose order at the end of the day, but their play space is the living room where we all pass and share space, so imposition of order feels necessary in order for injuries to not occur tripping over dragon-infested blanket forts and unicorn block castles.

Making artwork feels like that kind of play for me — a way to imagine the work beyond word.

At the book’s inception, it was hard for me to imagine that someone else’s artwork might appear on the cover. Though I understood that this was a likely possibility from reading about other author’s reflections on covers of past books (I can’t remember who now). I was therefore, so very grateful that my Editor and the Publisher at House of Anansi were open to talking about considering my artwork early on in the conversation.

I created a series of images connected to different stories in the book to share with the publishing team, and also shared with them a series of other potential pieces made not directly from the stories, but in relation to the themes in the book. The fabulous Designer at Anansi, Alysia Shewchuk, transformed the collage into what I feel is such a dazzling cover, translating a multi-textured collage into a two-dimensional book cover that seems to have depth to it in the way the fox peeks out of the white paint font. It feels magical, evocative, and inviting when I look at it. So much so that it sometimes surprises me that it’s my work. But then, that’s also how I feel when I feel I’ve taken a story to where it wants to go, so perhaps that’s a way to describe the feeling of having created something that then takes on a life of its own, the way my children do as the create their worlds in the presence of mine. 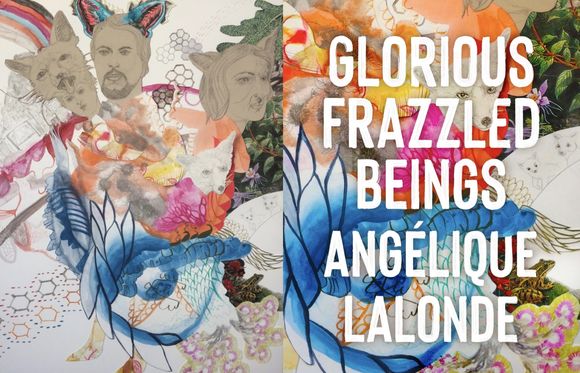