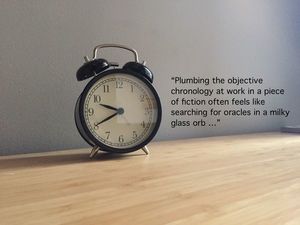 In my own life, I don’t usually remember when things happened in anything like Gregorian terms. I navigate time via benchmarks and associations. I remember what else happened at the same time. If I am asked to give the actual date something happened I’ll search that memory for something I can link to a document, to a time-stamped email, to some google-able public event. Without doing this kind of work to tie a memory to an objective time-frame, all I’ve got are moments floating in consciousness like details from an exploded-diagram, connected by a thousand breathing associations, rather than anything orderly or chronological.

I teach, and teaching happens according to a rigid schedule—meaning I must show up at certain places at certain times—so I’ve learned to manage objective time. I lean on scaffolding. Each night, I cross off the date on a calendar and, wherever I tend to sit down and stare a while, I’ve tacked up a copy of my teaching schedule. By the bed I have an alarm clock with two independent alarms. I also keep lists—so, so many lists.

Context cues help, but they’re unreliable—as when, a couple decades ago, searching for something to re-rail a family conversation, I glanced at the platter on the table—saw a turkey—and remembering aloud that it was Thanksgiving, offered something I was thankful for.

How old am I? I couldn’t tell you with certainty. At least, not without pumping my birthdate into an online age calculator. I believed I was thirty for a whole year, and then, when I hit my birthday and did the math, had to celebrate that all over again.

So, when I’m writing, I have a hard time with time.

To navigate the timeline in a story, I find myself creating fictional versions of the kinds of scaffolds I lean on in life. Over my writing desk, I put up a calendar for the year, month or week the story spans; I make a file with relative dates. With the more complicated kinds of timelines a novel can hold, I literally recreate a paper version mapping out each main character’s timeline, or a spreadsheet of relative ages at key events. Without doing so, I simply won’t understand the way these characters are objectively moving through their calendar. Even then, plumbing the objective chronology at work in a piece of fiction often feels like searching for oracles in a milky glass orb.

Over the course of this pandemic, I’ve been struggling with time more than usual—in part, because I’m on a writing leave from the University, and many of my time-based reminders have vanished. This week, I finished a short story, a piece in which the present-tense timeline, unfolding over months, is tied to and bound up with the simultaneously unfolding story of a disordered, fractured past; it’s a story that, with the logic of broken memory, is profoundly non-linear. Writing the early draft of this story was dreamy and wonderfully strange. The composition was wholly intuitive, and while a challenge, it was easy, natural even, to get inside of that complicated character’s head.

But editing this story? Making coherent the objective timeline masked by the non-linear presentation? That was a nightmare. The timeline markers had all been obscured in the writing. It took my writing group to help me see how, from an objective point of view, the markers weren’t consistently deployed nor were they clock- and calendar-logical. It took me weeks to wrap my head around what would actually be happening when, and only then could I go back and tip-in the kind of time-signatures that occur with a main character who is pregnant over months of story-time. That belly had to get bigger over the story, and as it grew, movement would, of course, become gradually more taxing, and all of these signposts had to be consistent, even if the character’s own experience of time was quite at odds with that. In other words, I needed the authorial signposts to be objective and logical, even if the character’s unfolding of these events to the reader is not.

Perhaps this is why, when I sat down to write my latest novel, Girl Minus X, I restricted the time-frame. Most of the events in Girl Minus X unfold in the present tense, over about a week, to foster immediacy. While memories are triggered over the course of the viral pandemic in the book, the main character moves consistently forward, though, yes, small trauma-triggered pockets of remembering dimple the timeframe. However, the past is carefully deployed. For the most part, I constrained the main character’s memories to a relatively short period of time—when she was taken up in the dubious care of a fictive state and living at a work farm. The geographies of the present and past are distinct, which makes everything a bit simpler, as each time frame has independent markers. A side-benefit of all this was that I minimized the signature of time—or so I thought.

Girl Minus X was recently published by Wolsak & Wynn, and when I began reading from it, I realized that as a result of these strictures, a different kind of time had been allowed to emerge in the narrative. In reducing the demands of that anxiety-laden, tapping-on-your-wristwatch objective form, I’d opened up room for another register of time, which became as much a subject of the novel as memory or trauma. My absolutely favourite parts of that book are the passages in which the main character, Dany, considers, observes, and experiences time: the way it bottlenecks and stretches long, the way it becomes porous as consciousness slows—shocked with new awareness.

So, while time can sometimes be a problem for me—it’s also a gift.

I think we all have things we consider limitations, that seem to hold us back, but which themselves can become a doorway, opening some exciting new possibility for our writing. Maybe that is how it is with gifts: they come to us disguised as hurdles. Perhaps, sometimes, when it comes to what we perceive as failings, the best thing we can do is make peace and lean in.

Anne Stone is the author of four novels, Delible (2007), Hush (1999) and jacks: a gothic gospel (1998), and her newest book, Girl Minus X. She is currently at work on a collection of short fiction. She spent her childhood in Toronto, lived in Montreal, and now makes her home in Vancouver, where she teaches Creative Writing and Literature at Capilano University.

As the world around them collapses under the weight of a slow, creeping virus that erodes memory, fifteen-year-old Dany and her five-year-old sister are on the edge of their own personal apocalypse – fearing separation at the hands of child services. When a dangerous new strain of the virus emerges, Dany careens headlong into crisis, determined to save her sister. Together with her best friend and reluctant history teacher, they must flee the city. Along the way, Dany faces a series of devastating choices: Can she make the dangerous attempt to break her aunt out of the prison-hospice? And just how much is Dany willing to sacrifice to ensure her sister and her friends survive?

Girl Minus X is a meditation on the gift that is memory and its hidden costs, pitting a fear of forgetting against a desire to erase the past.