A Conversation With Alicia Elliot: Part One 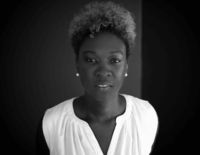 Canisia Lubrin: Many writers over time have expressed the sentiment that the writer, in order to write, is always at odds with their society. This appears, in some sense, to position the writer as a moralistic agent, even an activist. I wonder if you can share your insights about the writer’s “responsibility to her society.” I want to speak with you, a writer of fierce courage, whose work locates that particular discordance without reproducing it. I appreciate how your writing disturbs with empathy and I am particularly taken by your attention to community and collaboration.

Alicia Elliott: That’s very nice of you to say. Thank you!

I remember the first time I heard a creative writing professor tell me a writer is always at odds with their society. It was nearly a decade ago, but my feelings on the subject haven’t really changed. I think it’s always paramount to define what you consider “society” to be. It is not as universal a term as people seem to believe. For example, my writing on Indigenous sovereignty may be at odds with non-Native Canadian society, while simultaneously being perfectly in line with various Native societies. When people say the word “society,” it seems to me they often mean “Western, middle-to-upper class, straight, white, male society” - or the people who are primarily in charge of regulating and sometimes restricting our lives. Why do we assume these are the only people who make up our “society”? Are we really referring to everyone when we use this term? We need to interrogate where these assumptions come from and how they impact our views of one another.

It may be more accurate and helpful to simply say: Writers resist. Whether you’re an experimental writer resisting traditional forms, a queer writer resisting the expectations of heterosexuality, a disabled writer resisting the challenges posed by an overwhelmingly ableist society, you are resisting. I tend to think of resistance as a very generative thing. After all, people collectively resisting together creates communities, and the power of communities lies in their ability to make space where there wasn’t space before - to encourage people to come together, collaborate and cause change.

I don’t think you can ever really separate communities from some form of resistance. Even as you’re writing against the expectations of one community (or society), you’re usually creating, upholding or reinforcing those of another. I always find it so interesting when people deny that their writing is political. All writing is inherently political! Even when we choose to do nothing to change the status quo, that is a choice that has consequences - those consequences being, of course, that current injustices will continue, unchecked. In that way, we are all activists, whether we want to admit it or not. I’m not sure if that really answers your question...

CL: Writers resist. That means the thing we don’t want it to mean, doesn’t it? I mean, we don’t want to break glass in writers’ ears about why writers, whatever they get up to, are occupying resistance spaces. I tend to agree with your thoughts on positionality. As much as we may want to take up another role from time to time, the writer is active in whatever position they occupy, which means they counterbalance positions not their own. The thing that is written down with the intention to have it read is an offering  of essential things that occupy active, not passive, space.

This reminds me of the poem “Violins” by Rowan Ricardo Phillips. Have you read it? This poem, by its title, suggests personal and communal play both metaphorically and literally. It makes me think deeply about something the fine poet, Vladimir Lucien says about the function of play in world-building, in the making of societies. That play is a radical form of creation, which also extends to the art of writing is something that is easily taken for granted, or worse, at face value. From line one, "Violins" begins immediately to dislodge personal play from its uncalled identity, even with all the high culture that an instrument like the violin elicits. Still, Phillips complicates play as something which is thought to be entirely in the domain of children, whatever the cliche is. In the most unassuming mundane language Phillips then eviscerates the very idea of mundanity of its so-called passivity. But “Violins” is a very intensely politically active poem.

Simultaneity is a complicated meshing of push and pull. And I don’t know what your process is like, but unless I feel that I’ve written something that can be offered toward--and is worthy of--understanding, I don’t relent.

AE: Wow, that poem was like a master’s thesis in twenty-four lines. This is why I admire poetry so much. Its ability to convey so many meanings in mere moments. It’s also why I can’t write poetry - I’m too damn long-winded.

I’m not sure if you’ve read the essay, “In Defense of the Wastelands” by Erica Violet Lee, but she does an incredible job teasing out the ways that the nation-state keeps us from imagining these realities by keeping us in a state of constant survival.

“I wonder how our bodies would function if they weren’t tasked with survival in an occupied state,” she writes. “What if our muscles did not have to stay braced for battle even as we sleep? How would we relate to one another if we were able to let down the weight of anti-colonial armour from our skin?”

The way that she brings together the threads of oppression - from the land, to our bodies, to our minds - is stunning. She comes to the conclusion that loving ourselves in lands and bodies considered “wastelands” attests “that these places are worthy of healing and that we are worthy of life beyond survival.” That idea in and of itself is completely outside the limited imaginations of those who force us in our prisons. Perhaps that’s what imprisons them - their own lack of imagination. They can’t see love as protest, love as resistance, love as radical. Love as law.