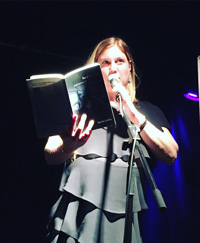 I’ve had such a wonderful time being your Writer in Residence this month.

It feels like perfect timing that I’m writing my last Writer in Residence post immediately after doing the Toronto Tightrope Books launch for For All the Men (and Some of the Women) I’ve Known.

Tonight was so incredibly special. I read my short story, "Wolf Eyes", and I felt so supported by the writing community. I was so excited and delighted by how many people came, friends, and family members and writers whose work I love.

It was everything I dreamed it would be, and more.

Thank you so much to Open Book for having me, and to everyone who read my posts,

It’s been such a great month,

For All the Men (and Some of the Women) I've Known

From Tightrope Books: In For All The Men (and Some of The Women) I’ve Known, Danila Botha explores the nuances and complexity of relationships, from love to betrayal.