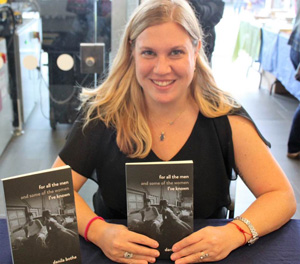 Music has always been a huge part of my writing process.

It helps me tremendously when it comes to entering the mind of a character, or an experience, and staying there for as long as the writing (and editing) process requires.

When I was writing my first book, a collection of short stories called Got No Secrets, I discovered an album by Brendan Benson called One Mississippi. It contained a song that perfectly captured the essence of my book: the darkness of real life sometimes, the matter of factness, the unexpected humour, and the impressive resilience. He was kind enough to give me permission to name my collection after it.

For my novel, Too Much on the Inside, I listened to a huge range of music (from South Africa, Israel, Brazil and Nova Scotia, which is where my characters were from) and I was really excited when I got to talk about what I listened to for a Toronto Star article about music and writing.

When I wrote the stories in For All the Men (and Some of the Women) I’ve Known, I tried to find the songs that described the complexity of emotions as precisely as possible.

Here is a list of what I listened to the most.

For these two linked stories, I listened to 90’s ska punk, like Save Ferris especially their song, Lies, Sublime, and early 2000’s band the Oohlas, to get into the right mindset for Ariel.

The other song I had on repeat as I wrote the emotional scenes was PJ Harvey, featuring Thom Yorke’s This Mess We’re In. It’s incredibly acute.

The Keeper of Your Secrets,
Start Being More Independent (and Stop Telling Me You Love Me)
My Second Family

For these linked stories, I listened to the American singer/songwriter Amy Correia. She has this fantastic song, Fallen Out Love, which beautifully describes the feeling of uncertainty that a person has when they know a relationship should end. It opens with the line “With wine dark mouths we kiss goodnight/I can’t sleep at all because I know it’s not right.”

I also listened to Kathleen Edwards’ Change the Sheets and Morcheeba’s Over and Over.

The original concept for the story came from rehearing Evan Dando and Juliana Hatfield’s song My Drug Buddy, a favourite of mine from the 90’s. Their voices compliment each other so well, and the lyrics, about dependency and friendship and the line” I’m too much with myself/I want to be someone else” were the inspiration for the dynamic between the Nandi and Riaan.

I also listened to Sondre Lerche’s You Know So Well and Simon Wilcox’s Come Over.

John Lennon, O My Love
Bjork- Sun in My Mouth.

If there’s anything in the world more perfect than a Bjork song, it’s a Bjork song where she sings ee cummings’ poetry.

I’ve always loved both Kathleen Hanna and Courtney Love. Bikini Kill’s Rebel Girl and Hole’s Doll Parts are what I pictured Mira listening to as she walked to meet Dillon.

I love Tori Amos’s music so much (and her album, Little Earthquakes) that I actually wrote it into the story (as music Mira loves) When I wrote the scene about Mira’s first time, I listened repeatedly to her song, Leather “Oh God/Could it be the weather/Oh God, why am I here?”) and to Silent All These Years.

I love this song for so many reasons, but I especially love the line: “I’m no longer phased anymore/by your classless ways/it takes more than that to amaze me these days” It worked so perfectly with the title, and the feeling at the end of the story.

Blur- Tender I thought of the line ”Tender is the heart/ that’s screwing up my life” throughout the writing of this story.
Metric- Collect Call

What Will Today’s Adventure Be?

No Doubt- Sunday Morning
The Arcade Fire- In the Backseat

You’re in Love With Me, Aren’t You?

This Circus We’re In

Fiona Apple is my absolute favourite singer and songwriter, and I listened to all of her albums a lot as I wrote the title story.

The ones I found myself listening to most were Oh Well, Werewolf, Parting Gift and I Know, which has this beautiful, hopeful final line:
“And if it gets too late/for me to wait/ for you to find you love me, and tell me so/ It’s okay, don’t need to say it”

For All the Men (and Some of the Women) I've Known

From Tightrope Books: In For All The Men (and Some of The Women) I’ve Known, Danila Botha explores the nuances and complexity of relationships, from love to betrayal.