Lisa de Nikolits is the award winning author of six novels, including The Hungry Mirror, West of Wawa, and most recently, Between the Cracks She Fell.

She has a new novel, called The Nearly Girl, that is forthcoming with Inanna Publications this fall. We had a chance to talk about The Nearly Girl, her unique characters, and her love of the Toronto poetry scene. 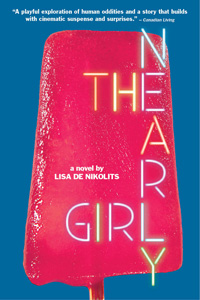 DB: Tell us about your new novel, The Nearly Girl.

LDN: The Nearly Girl is a fast-paced literary thriller about Amelia, a girl with a rare psychosis – she nearly gets things right but she also gets them very wrong.

With a poetic genius for a father (Henry), a body builder for a mother (Megan) and a crazy psychiatrist for a therapist (Dr. Frances Carroll), the novel enjoys its share of twists and turns.

The book is also a love story and it’s a story about family, and about not fitting in and learning to live with that. It’s about unlikely friendships and how sometimes the vicissitudes of life can come gift-wrapped with surprises.

DB: That sounds great.  I really love your idionsyncratic characters. Can we talk about Dr Carroll, the psychiatrist in the story? He has a a lot of pretty unorthodox approaches, including DTOT-Do the Opposite Thing. Where did you get the inspiration for him?

LDN: The earliest inspiration came from a book called The Dice Man by Luke Rhinehart. It’s  about a psychiatrist who makes decisions for his patients according to the cast of the dice.

The Nearly Girl looks at mental wellness, phobias, addiction and anxiety, and it explores how difficult it is to be someone who is different in this world.

I think that is also why this is one of my favourite books to date, because of its philosophy of self-acceptance. There is a frankness to the dialogue that I really enjoyed. A lot of our real-life dialogue is cloaked in social niceties and this book doesn’t have any of that! I think that’s one of the main things I love about writing – you can role-play all kinds of personalities and it makes things very interesting. You don’t have to just be you.

DB: For sure. I totally know what you mean. I also want to talk about Henry the Poet, Amelia’s father. There is a lot in The Nearly Girl about the Toronto poetry scene although it’s set in 1986 – tell us what inspired that.

LDN: One of my favourite characters in The Nearly Girl is Henry the Poet. He’s obsessed with the laws of propositional logic which he attempts to disprove in his acclaimed lyrical rants. He ingests large quantities of LSD in an effort to ‘balance’ his vision of the world and succeeds in having a nervous breakdown. He vanishes for a large part of Amelia’s life, and returns later to play a pivotal role as a mentor and friend in her young adulthood.

One of the things I fell in love with, and one of the main reasons I stayed in Canada, was the West End Queen Street poetry scene. I love going to poetry readings. I have such a huge respect for Canadian poets. Ken Babstock, Catherine Graham, Stuart Ross (who hosts a marvelous poetry boot camp), Paul Vermeersch, Liz Howard, Liz Worth, Elizabeth Greene, Eva Tihanyi, Matthew Tierney, Michael Fraser, Bänoo Zan, Sandra Kasturi, Andrea Thompson, Valentino Assenza, Vladimir Azarov, Lisa Young, George Bowering, Peter Midgley, Kathryn Mockler and so many others.

DB: Do you write poetry?

LDN: I try! If I attend more of Stuart Ross’s boot camps, I may improve!

I’d also love to take a course with Catherine Graham. I am certain that writing poetry is beneficial to novel writing in many ways – I would learn to be more succinct and I know that my writing would pack more a visual and emotive power punch if my poetry improved.

This is something, Danila, that I really love about your work – you say so much, in one sentence, about what a character is feeling and it’s very vivid. I love the intensity of your work and your characters are very memorable.

DB: Aw. That’s so kind, thank you. What are some of your other literary inspirations?

A Complicated Kindness by Miriam Toews. It’s one of the most memorable books I have ever read. The writing was just pitch perfect. Oh, and Stunt by Claudia Dey. I love that book so much too.

LDN: I also feel that there is a purity and an honesty to the emotions and actions in The Nearly Girl that I would liken to John Irving’s A Prayer for Owen Meany. I am no John Irving but I love his style and characterization and try very hard to achieve that kind of voice.

DB: You’ve published so much in such a short time. It’s not just that you’re prolific, it the deep love that you have for your characters, and the energy that it takes to explore complicated story lines. How do you do it and what compels you?

LDN: I admit that that the word ‘prolific’ makes me feel uneasy! I feel like it makes me sound like the Costco of writing.

DB: (laughing) What? No, I think it’s amazing. It’s inspiring.

LDN: An interviewer recently asked me if I feel that I need to write a book a year for marketing purposes (as a book a year has been touted as a good way to keep oneself and one’s books current in the minds of readers – and on their bookshelves) but that would not serve as an incentive to me. I write as much as I do because I am still chasing that voice, chasing the voice that will ultimately say what I feel needs to be said, and then I will be done.

DB: What are you working on these days?

LDN: I have two books that will be published with Inanna in 2017 and 2018 – No Fury Like That (a revenge novel set in purgatory and on earth and with elements of magical realism) and Rotten Peaches (a novel about obsessive love that can go horribly wrong). I’m currently working on a new book called The Occult Persuasion. It will see a series of lives intersecting; a group of young people in Europe, a middle-aged couple in Australia, a patient of an insane asylum in Sydney Australia in the 1930’s (clearly no longer alive but appearing as in photographs with a message that only one young man can see).  I am still at the gathering of data stage for this one but I hope to have a first draft written by the end of the year.

DB: That sounds great. I’m so excited to read them!