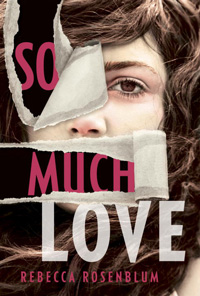 Rebecca Rosenblum is an incredible writer. Her debut collection of short stories, Once (Biblioasis, 2008) inspires me every time I read it (and I have reread it about ten times, easily). Her second collection, the wonderful The Big Dream, was published in 2013. Her debut novel, So Much Love, is forthcoming in March 2017 from McClelland and Stewart. I had a chance to talk to Rebecca about her writing and research process, and her inspiration for her new book.

DB: Tell us about So Much Love.

RR: When Catherine Reindeer vanishes from the parking lot outside the restaurant where she works, an entire community is shattered. Moving back and forth from her outer circle of acquaintances to her closest intimates, So Much Love reveals how an unexpected disappearance can overturn the lives of those left behind: Catherine’s fellow waitress now sees danger all around her. Her mother seeks comfort in saying her name over and over again. Her professor finds himself thinking of her constantly. Her husband refuses to give up hope that she will one day return. But at the heart of the novel is Catherine’s own surprising story of resilience and recovery. When, after months of captivity, a final devastating loss forces her to make a bold decision, she is unprepared for everything that follows her dramatic escape.

DB:  Wow. It sounds amazing. Was it difficult to write about that kind of subject matter?

RR: It was, yeah. It's hard to go to such painful places with the characters, and hard too to make the prose bring the reader in without being aggressive or sensationalistic.

DB: Your writing is always so deeply sensitive and insightful. But still, I can imagine.

RR: It was a really difficult balance to strike, especially when I was struggling not to turn away from things I was uncomfortable with. I had to sit with a number of the scenes a long time.

RR: I did a ton of research but it was very scattered. The two central stories, Catherine's and Julianna's, have a lot of analogues in the news, both past and present, but they weren't based on in particular. When I read for research, I was looking for details of feeling, how people felt in certain situations, what reactions they had. I just read stories that resonated with me, that pinged with something in how I understand the story. I concentrated most of my research on first-person texts; news reports and other secondary sources didn't help me get where I wanted to go as well.

DB: What inspired you to write this story?

RR: I actually started thinking about this story in a university CanLit class when we were talking about Gwendolyn MacEwen, a writer I very much admire.

DB: I love her work too.

RR: I noticed that we were talking about her poetry and her sad death--and the sad parts of her life--in very much the same tone. Her life was like another poem, which felt uncomfortable to me. So I started writing from that place, which actually a really excellent one to write from--asking a question about why I'm thinking what I'm thinking.

DB: That’s such an interesting perspective. I’m really looking forward to reading it.

Karen Smythe is the author of the fantastic collection of short stories The Stubborn Bones (Rainboast Books, 2001) She has a new novel, This Side of Sad, forthcoming from Goose Lane Editions in Fall 2017. We had a chance to talk about her new book, some of the challenges writing it, and her literary inspirations.

DB: Tell us about This Side of Sad.

KS: The narrator of This Side of Sad is a woman named Maslen whose husband James has recently died under quasi-mysterious circumstances. Written in first-person, it renders Maslen's inner life in an a linear, fragmented form that is organized by associative logic; she thinks her way toward understanding both what had happened to her marriage before James's death and the significance of two previous relationships. The novel is about the varieties of love--about the way we become ourselves through both our connections to and the distances we keep from others, and what happens when we lose those who are most important to us.

DB: The varieties of love. I love that phrase. What was the most challenging part of the writing process?

KS: This book was challenging to write because I had in effect put my writing on hold for about fifteen years due to demands in my work life (I held a series of senior administrative positions at universities and professional colleges). My first book was published back in 2001.

DB: Right, it had been a few years.

KS: Also, in this book I wanted to weave together three lines of story-telling that emerge as the narrator remembers events, not in the order they happened. I first wrote about 100 pages in sections that focused on one story line at a time, and it bored me. I wasn't achieving what I wanted to achieve, so I started over again and came up with a way to write the novel in a form that suited the material. Once I had this insight, I knew it would work and I never looked back.

DB: That’s great. What were your literary inspirations?

KS: I am inspired by so many writers: Alice Munro, Miriam Toews, Diane Schoemperlen, Colm Toibin, Rachel Cusk, Jenny Erpenbeck, Harold Brodkey, Ann Beattie, Marilynne Robinson, Yoel Hoffman, Gina Berriault, Barry Lopez, John Berger... to name a few. These are all writers who stretch my understanding of humanity, of the complexity of relationships and of people as individuals and as members of communities, with gorgeous and often simple writing--"simple" as in perfectly said, in language so beautiful and true that it changes you every time you read it.

Ready for more? Check out Part 2 of this series for more hotly anticipated books.