I really love touring. I love doing readings, and I try to do as many as I can.  So far, for For All the Men (and Some of the Women) I’ve Known, I’ve read at Resonance Reading Series in Montreal, and I just had a chance this weekend to read at Word on The Street in Halifax, and to do a signing at Chapters Indigo in Bayer’s Lake, also in Halifax, the next day.

They were incredibly wonderful experiences.

I’m really excited for the Toronto launch on September 28th.  I love travelling to new places, I love meeting other writers and readers, who are just as excited about connecting over a shared love of words and books. There are a lot of challenges with touring, including the costs, the planning of the logistics (from where to stay, to applying for travel grants, etc) but despite all of that, I think that touring is amazing, and beneficial to any writer. 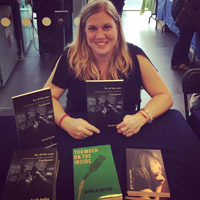 Here are some of my top reasons:

1) You get to meet other writers in real life. Email and social media are great, but there’s nothing like meeting someone whose work inspired you to write, and telling them that face to face. There’s also nothing like hearing another writer (whose work you haven’t yet read) read, and falling in love with their turns of phrase. There are so many opportunities to be inspired, to make friends, find other writers to tour with. The writing community in Canada is fantastic. Writers at all stages of their careers have been unbelievably supportive, and kind to me, and it’s always an honour to meet them in real life and talk about writing, and inspirations and our lives.

2) You get to meet real life readers. So much of what we do as writers exists in a relatively solitary capacity. We spend a lot of time in front of our computers, wondering who (if anyone) will read our work and what they’ll think of it. There’s something so special about doing a reading and watching as people connect unexpectedly with a sentence, an idea, or a feeling. I think some of the most amazing moments I’ve had post-reading are when people who’ve experienced similar things to my characters tell me I’ve captured things accurately, or meaningfully. It’s always such a relief to hear (because most of what I write is based on research, and you always hope that you’re getting it right, but you can never know for sure) I also find it incredibly exciting to meet other people who are just as enthusiastic about the written word. I really love getting recommendations on what to read.

3) You get to travel because of your work. I remember the feeling the first time I was in airport, and a person who worked for the airline asked me what the nature of my trip was. I could honestly answer business, because of my writing, and it felt so great. Equally wonderful and validating is the first time you’re invited to read at festival or reading series in another country, and you get to fill in writer or author on your customs form, under the business box that you just checked off.

4) You get to discover wonderful new things in cities or towns that you don’t live in, including the best bookstores, musicians, artists, galleries, restaurants, and geographic landscapes. I find that travelling shakes something inside me and challenges me to imagine things from other perspectives.

5) You get some pretty funny stories if things don’t go amazingly. I once read (with another writer) to a bookstore full of exactly four people. I’ve read (as part of a festival) to a restaurant full of people eating dinner (I was worried I wouldn’t be heard above the sounds of lobster shell cracking) I once read in a reading series after a writer who wrote an essay about the Dow Jones, and another writer who had self published a romance novel (I read after her eight page sex scene) It was surprising, but I actually enjoyed myself. I liked the challenge of staying positive, and I felt unbelievably grateful if someone bought a book. I was also reminded of how badly I wanted to keep writing and touring and finding new audiences.

6) You get to envision the end in sight to your current project. This is especially helpful if you’re struggling with a central part of it- the validation from an audience on tour, in the form of applause, insightful questions, comments, or even just their undivided attention as you read out loud, is such a special thing. It can make any writer momentarily feel like a literary rockstar (especially as you sit in your pajama bottoms, rewriting a key scene in the third person.)

Too Much on the Inside

From Quattro Books: Set in the sub-cultural heartland of Toronto’s Queen Street West, Too Much on the Inside explores the depths of human connection as the lives of four people in their twenties converge with the impossible task of escaping their pasts in Brazil, Israel, South Africa, and Nova Scotia. They wrestle with love, heartbreak and angst while trying to build new identities. Too Much on the Inside is an authentic amalgam of relationships and perseverance, in the tradition of Jennifer Egan’s A Visit from the Goon Squad, Camilla Gibb’s The Petty Details of So and So’s Life, and J.M. Coetzee’s Disgrace, illuminated with the author’s own unique insights.