Alex Manley is a Montreal writer. A graduate of Concordia University's creative writing program, he was the winner of the 2012 Irving Layton Award for Fiction. His work has appeared in Maisonneuve magazine, Carte Blanche, the Puritan, Powder Keg, and the Association of American Poets' Poem-a-Day feature, among others, and his debut poetry collection, We Are All Just Animals & Plants, was published by Metatron Press in 2016.

Alex has the greatest capacity for enthusiasm of almost anyone I know; he was the first person I asked to do one of these interviews, because it seemed like the most natural fit in the world. He has an abiding love of language, of puns, of small moments that encapsulate some greater truth about the world. You can see his in his poetry, where his lines turn on a dime from serious emotional engagement to flourishes of technicolour wordplay and back again. You can see it in his tweets, which contain a similar balance of play and thoughtfulness. And you can see it in his enthusiasm for other people's work, which is why it was so lovely to talk to him about his favourite Vines.

EH: What's your current online obsession, and what do you love about it? 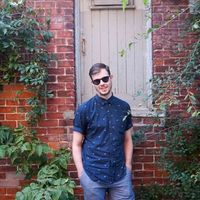 AM: My current online obsession is Vines—or, more specifically, the sort of cottage industry of post-Vine Vine culture that has sprung up in the aftermath of the demise of the social media site/app, which allowed users to create, upload, like and share six-second video clips, and was shuttered in January 2017 by Twitter, which owned it.

What I love about Vines and their now-ghostly presence in the online discourse in 2018 is seeing how a very here-and-now-centric online population memorializes what is now essentially a dead art form, which feels, in a kind of absurd way, like processing an unnameable form of cultural grief. There is this gigantic corpus of shared culture that was, by its very nature, ephemeral; bite-sized clips, typically no-budget, produced by nobodies. They were disseminated widely for a few years, became popular enough for genre tropes and stylistic conventions to emerge, created a few minor celebrities of various stripes, and then were ended in an instant by the inscrutable hand of the market. And now, to have been a Vine fan during their heyday feels sort of like having awoken from a delirious dream you haven't yet forgotten—except, as part of a giant collective who all dreamt the same dream. You can vividly recall, quote, imitate, re-enact all these beautiful, insane little moments that you experienced, that so many strangers share, and to do so can feel super fun and cathartic. But even though there's a loosely defined Vine canon of the most classic and epic Vines, pretty much none of them have really penetrated the culture at large in any way, and their creators, for the most part, are still the nobodies they were before they made their six-second video clips. (Even writing this, insisting on the importance or artistic viability of Vines, I feel like I sound like a raving lunatic, for instance, but then I think of the infamous "back at it again at Krispy Kreme" Vine and all is right in the world.)

Those six Vines, to me, represent six of my favourite Vine genres. Of course, there are more than six (and I'm not even remotely going to get into Vine sub-genres) but to me, these six Vines represent six prominent genres with tropes and characters that crop up over and over again. I'll break it down: back at it again at the krispy kreme This perhaps the best example of the genre of Vine where some hilarious shit happens (let's call them Hilarious Shit Vines) and it just so happens to be caught on tape. It's not scripted, it's not planned—in fact, in this case, it's the opposite, a plan gone horribly wrong—and the beauty of it is in watching something obviously ridiculous and over-the-top manifest itself in front of the camera, completely outside of the control of whoever's filming (and then manifest itself over and over as the Vine loops). If comedy is rupture, this is the purest kind of Vine, capturing something that Should Not Be. Other fine examples of this are the "Can I please get a waffle?" Vine, the old lady throwing her milk at the sound of a car horn, and, arguably, the infamous "Zack, stop!" Vine, although that begins to shade into some of the other categories.

This is my favourite example of the Reaction Vine, which derives its power not from an over-the-top thing happening, but from an over-the-top or otherwise comedic reaction to something often relatively pedestrian happening, like, say, a girl vaping at a house party. These Vines are often funny sort of despite themselves, because on the surface, nothing of note happens, but the juxtaposition between the mundane happening and the non-mundane reaction can be enough to propel this kind of Vine into literal laugh-out-loud territory. Other strong contenders here include the "and they were roommates" and "free shavocado" Vines.

it is wednesday, my dudes

One step up from the Reaction Vine we have the Basic Comedy Vine. These feature a single person attempting to be funny, and often being funny in a kind of "despite" way rather than a "because" way—that is, we're laughing at them at the same time as we're laughing with them, but it's hard to parse out exactly what percentage of each is in the mix. Typically, these are Vines made by relative nobodies, and their enduring popularity can have odd effects on the lives of the people therein, like in this case, where they attain a kind of one-hit wonder micro-celebrity status and spend the rest of their days openly failing to recapture the magic of a single six-second clip they uploaded to the internet several years ago. Bleak, isn't it? Anyway, other good examples here are "I'm washing me, and my clothes," "Broom, broom," and the infamous "Take on Me" spin girl.

This genre I would call something like the Advanced Comedy Vine. I have a soft spot for Demi Adejuyigbe, who's an absolute genius and who managed to make the leap from Vine creator to TV writer with aplomb, so I'm using this one even if it's perhaps not the best example of the genre. In any case, at this level we have smart, funny people who are putting serious thought and work into making tiny little comedy films. These feature things like characters, dialogue, plot, twists, dramatic climaxes—and at their best, represent the height of what Vine was able to accomplish as a medium. There was a certain beauty in watching the best minds of our generation cram the full bonkersness of their comedy into a six-second frame, and the way in which these videos stripped everything down to a single comedic moment was beautiful, the filmic equivalent of watching people cram complex jokes into 140 characters on Twitter. Other faves of mine in this genre include the transcendent "Gimme me hat back, Jordan," "Michael with a B" and the long-running "Pronouncing Things Incorrectly" series.

It's arguable that this Vine could fall into either the Reaction Vine or the Basic Comedy Vine categories, but feels like enough of a "Thing" that I wanted to call it out. This is the Ridiculous Kid Vine. Lord knows why, but some of the most popular Vines of all time are just clips of kids being ridiculous. It's sort of a 21st-century America's Funniest Home Videos offshoot, but there's something really viscerally hilarious about watching kids just be themselves in the way that kids are before they become fully conscious of themselves and the world around them the way adults are. The beauty of watching a pre-pubescent dork gleefully mispronounce "tortilla," or welcome you to Chili's, or play two recorders simultaneously with his nose, or just dance around with his ears poking out of his hoodie? To borrow a classic Ridiculous Kid Vine phrase, that's legitness, man.

is that a weed

Last but not least, there was this: the Comedic Kid Vine. There's a certain beauty in watching these kids take the step up from Basic Comedy-type Vines to Advanced Comedy-type Vines. Most kids aren't cut out for this, and why should they be? They're kids! They should be living their lives and figuring out long division and stuff, not making tightly scripted six-second comedy videos. And yet, watching the "Is that a weed?" Vine, it's hard not to fall in love with the possibility and the beauty of watching kids not even tall enough to ride on an amusement park ride make beautifully absurd stuff like this. RIP Vine. You were taken from us too soon.