I visited the wonderous Borghese Gallery and gardens in Rome this summer for the first time. 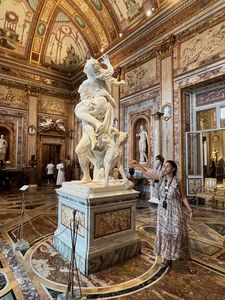 Originally a powerful merchant family from Sienna, the Borgheses moved to Rome in the 16th century.

Cardinal Scipione Borghese, nephew to Pope Paul V (reign 1605–1621), built this breathtakingly grand palazzo in an effort to expand the family’s influence and telegraph their wealth at a time when art was at the very centre of power, government, and civic life.

I learned all this during a small group tour at the gallery, let by an Italian art historian. With great knowledge and enthusiasm, Luciana wove a compelling narrative arc about the history of art, the dominating influence of Roman society, the political machinations within Italy and Europe at the time, and the rise (and ultimately fall) of the Borgheses.

Individual art pieces served as characters in her narrative. The specificity by which she brought them to life contextualized by the historical, political and artistic realities of the time, deepened my emotional connection to the collection, the gallery and the city. 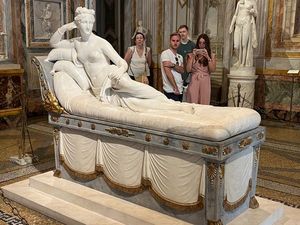 Pauline was the younger sister of Napolean and wife of Camillo Borghese, thus one of the most powerful women in Europe at the time. She began life in poverty and throughout a stunning series of events and sudden reversals before dying at 44, she proved herself to be no shrinking violet.

The sculpture was commissioned after Pauline married into the Borghese family. Constructed on a dais that slowly rotated in front of the viewing audience, it was originally entirely covered in genuine gold leaf.

Pauline caused controversy at the time by posing naked for Canova, and for touring with the sculpture. Though this was hardly the first controversy she stared down. Married previously to a general who served under her brother, Pauline enjoyed many lovers during and between marriages, with high society gossiping about her ‘Bacchanalian promiscuity.’

She was powerful enough to waive off the criticism – that is, until her husband got into financial trouble and had to sell off artwork to pay his debts (to the Louvre, forming the Borghese collection there) and her brother was deposed.

Then, Pauline liquidated her assets to keep afloat. Her husband fled, although she persuaded the Pope to force Camillo to take her back only three months before her death from tuberculosis.

Pauline’s story is dramatic, intertwined with big historic events, court intrigue, power, and wealth. But for me, what’s most fascinating is her insistence on playing against convention. A woman with robust physical desires putting herself on display, despite the knives out all around her. A Corsican thumbing her nose at Italian nobility by having herself sculpted in the guise of a goddess.

Characters in novels should be as original and surprising as Pauline. Regardless of whether the epiphany and character arc are moved along with the dramatic sweep of history (Lawrence Hill’s Aminata Diallo in The Book of Negroes) or whether the ‘action’ of the novel is small (Miss Marsalles in Alice Munro’s Dance of the Happy Shades), characters should compel our attention.

I love complex female protagonists in particular, like Jenny Bonnet in Frog Music by Emma Donoghue, the wife in Souvankham Thammavongsa’s Randy Travis, and Ava Lee in Ian Hamilton’s series.

Human beings are fraught with contradiction. Characters should be, too, if the author is writing honestly. Saints are boring in fiction, and one-dimensional villains overdone.

It can be tempting to use short-hand to flesh out a character. Their political voting allegiance. Cultural backgrounds. Views on a particular topic. We assume there’s an objective truth to these things. But of course, there’s not. Ten people see the world around them in ten different ways.

As writers, we must create characters who behave in ways that seem believable yet who are unpredictable enough to keep us hooked. How do we do that

I rarely do these things. Instead, I like to take my characters for walks. I wander streets trying to observe the world around me as they would. During writing and editing, I read the dialogue out loud over and over again to hear the rhythms. To listen for false notes, word choices, tone, and expression.

I’ve always been an unrepentant eavesdropper in public places. It’s a treasure trove of potential characters. You know nothing about these strangers and that allows you to build out an imaginary history based on what they say, and/or either body language reveals or tries to hide.

I might write down fragments of conversation (especially from a nice juicy public fight) or physical descriptions, but mostly I just let them filter into the memory banks, to be recalled later. I save magazine interviews of people who provoke a strong reaction from me either positive or negative. I think a lot about characters and the relationships between them in long-form television series or film (though the former is generally more character-driven) and read scripts before/after watching them.

Humans are contradictory and fascinating, infuriating and instructive. They are the cornerstone of a good story, not a vehicle to carry a message or theme.

Art and the world around us offers innumerable role models like Pauline Borghese Bonaparte to borrow for inspiration. Let’s take full advantage.