It’s late October and I’m writing this on a cold, rainy day after learning my friend, the writer Sylvia Fraser, has passed away. 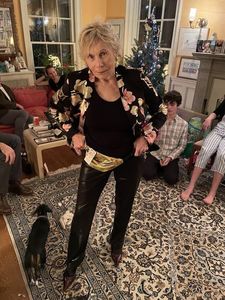 Sylvia was three decades older than me and more alive than almost anyone I knew. She backpacked alone around India for three months in her sixties. She took ayahuasca (a plant-based psychedelic) in the Amazonian jungle. She demonstrated on the front lines for animal rights.

She lived fiercely, with immense determination, curiosity and style.

In addition to being an accomplished and award-winning journalist of countless magazine articles, Sylvia was the author of eleven books – novels and non-fiction – including the well-known My Father’s House: A Memoir of Incest and of Healing (the first Canadian writer to break the taboo of writing on that topic). She was also a very active ghost-writer.

In short, Sylvia was a working writer. She perfected her craft; worked diligently and published consistently, was an active member of the writing community including founding member of The Writers Union of Canada and board member of the Writers Trust.

When my first novel came out last fall, Sylvia was generous with support and advice. But it wasn’t until I’d finished a draft of my second one and was working on additional writing projects, that she considered me a writer, versus someone who had written a book.

‘A writer is someone who writes’ is a phrase one trips over almost daily on social media. It’s not a sentiment I disagree with, but like most truisms, it’s shallow in meaning. Because to have a writing life isn’t about shots of your laptop in exotic locations (though I do that, too, see below!), it’s about committing yourself substantially to both the creative act and to the business of publishing. 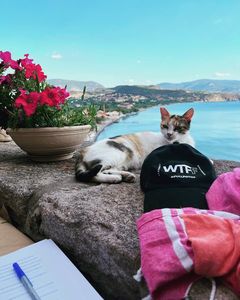 Molyvos, on the Greek island of Lesvos.

If there were ever a time period when writers wrote and their agents/publishers/publicists took care of everything else, that time is long gone. Publishers will tell you even the most artiste of authors obsess about their sales numbers. They check Book Manager to view the sales demand in indie bookstores; compare their Amazon ranking almost daily; scan the bestseller charts, or best-of lists, to see if they’ve made the cut.

Having a writing life is not a function of publishing credits, although I’d argue the goal of publishing (whether traditional, self or hybrid) is an important element. Writing to be read, versus seeking self-expression through narrative, seem to me to be two very different things.

Nor is it a function of writing to the exclusion of everything else. I can’t afford to write full-time. Nor can most writers in Canada (absent familial or marital support). Whether that would even be beneficial is a separate consideration. Another late and dearly missed writer friend, Priscila Uppal, firmly believed that the most interesting writing came from people who also had day jobs, as it gave them a more complex and complicated set of life experiences to write from.

Like most writers, I juggle paying work, family obligations, community involvement, volunteer hours, while trying to get enough exercise, sleep, antioxidants and anything else MedTwitter throws up.

But writing is always in the mix. Mostly, that’s early morning when the brain is fresh, and email is quiet before I shift to other responsibilities. If it’s going well, then the shift happens later, and I work into the evening. To feed my creative muscle, I also read books and scripts, watch film and long-form television, go to theatre and performing arts where possible, visit galleries and museums, and of course attend book readings and author interviews. 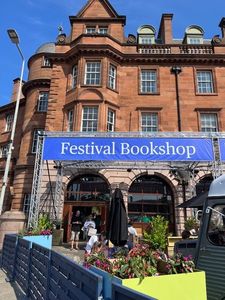 Being a professional writer means keeping up on industry news and events. I read industry mags and blogs (Quill and Quire, BookNet, Publishers Weekly, Publishers Marketplace, Kirkus, LitHub/Crime Reads, etc) and I follow many writers/agents/editors/publishers on social.

Publishing is a quixotic business – as in, it’s not much of a business but rather a series of unicorn events for the big multinationals who have the money to lurch between the promise of a bestseller and the reality, and then the passion players who make up the vast majority of the industry’s activity.

It’s often frustrating and sometimes infuriating. Yet the process of telling a story, and having people want to read it, keeps everyone tantalized. I’m always amazed when people are interested in the minutiae of how a writer works, because it implies daily existence is more exotic than it is. But I’ve come to believe that the magic trick of imagination, coupled with the intimate connection that comes through reading a story, is what drives the curiousity.

“You’re into it now, my dear,” Sylvia said to me recently, in her gravelly, knowing voice. And I am immensely grateful for that!

I’m delighted to have been asked by Open Book to be the writer in residence for November. I look forward to connecting with you this month, and hopefully hearing from you as well! I can be reached at info@helenwalsh.ca

In writing and reading solidarity,