My latest installment in this series on poets' relationships to writing exercises features Gary Barwin. Gary is a writer, musician, and multimedia artist and the author of 21 books of poetry and fiction. He will be 2017-2018 writer-in-residence at McMaster University and the Hamilton Public Library. His recent bestselling novel, Yiddish for Pirates was shortlisted for the Scotiabank Giller Prize and was nominated for the Governor-General’s Award. His new poetry book, No TV for Woodpeckers appears this month from Wolsak and Wynn. 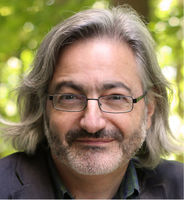 Sometimes I just sit down and right. Sometimes something has engaged me, put me in a certain brainspace, a mood, or has given me a sense of something—a sensibility or a pace or a particular kind of conceptual rhythm—and I begin from there. Often, I end up going elsewhere. But it’s often difficult to start with nothing, and so to assemble some materials—whether specific words or ideas or else processes or procedures—makes it easier. If I were a sculptor, I might start with a particular block of marble. I’d look at it and try to see what its potentialities are, what its restrictions are. What it might suggest, limit, or encourage. Or I might gather a shoe, a miniature 19th c. singing eunuch action figure and a model of the night sky and consider what kind of sculpture might employ these things. Or I’d decide to sculpt using only my nose or with my eyes closed, with a dog and the idea of erosion. Likewise, when I begin writing, I often assemble some particular materials (words, phrases, concepts) or methods (each line is the opposite of the line before it; the poem will not enact agency or identity; the poem will be sculpted from four different unrelated texts which I’ve melded and run through a Markov chain generator.) The combination of materials and methods and my interaction with them become the poem. Are the poem.

I feel that a writer always uses prompts or exercises whether one realizes it or not. Often, they are the received ones that the writer has learned through reading or through developing their own approach. A villanelle is a prompt and an exercise. So is free verse that has line lengths of around x words and fills up x number of pages. A haiku near a blue pond. Certain assumptions about textuality. A tree falls.

If I were a blues guitarist and I picked up my guitar, there would be certain patterns and approaches which would be my default. So, if I wanted to do something new, I’d consciously or unconsciously, choose to do something different. I’d tune my guitar differently. I’d write a piece that isn’t twelve bars of 4/4. I’d challenge myself to use some notes that weren’t in the traditional blues scale. I’d use my feet. Or someone else’s.

In writing poetry, I sometimes use prompts or exercises that I’ve read about (or a mix of all of them) but often I make up new approaches. Sometimes the prompts or restrictions emerge as the poem is developing or I decide to abandon them and sometimes they are the result of collaboration. Sometimes I realize that a certain thing is happening and so I deliberately try to either encourage it or derail it by establishing a procedure (which I might only haphazardly follow. I believe in listening to the poem as it emerges.) The resulting poem is often the record of my engagement with these approaches.

I feel that there are many factors which make me reach for the usual, which encourage my neurons to fire along their customary path. Culture, sense of self, language itself. And so, I use all these things to facilitate fresh thought, to encourage the synapses to one after another take another route through the dusky murk of my brain. By having to navigate restrictions, constraints or directed writing (e.g. write a poem that includes Elvis, chess, little bon bons in the shape of Vladimir Putin made out of giraffe gallbladders, genuine sorrow, boron, and that references logical positivism) I have to explore different modes of creation. Traditional forms (whether the sonnet or normative free verse) make conceptual assumptions, guide the mind to create certain patterns of thought. By steering the mind a different way, by having a productive dialogue with challenging prompts, restrictions or guidelines, I find that I uncover the assumptions behind normative thinking and writing and become a stranger poet in a stranger land and so creation more interesting work. Also, it’s fun to have something to bounce one’s poetic tennis ball against, to have to engage with things outside oneself, like a wall, or Serena Williams playing in Robert Frost’s netless tennis court.

Do you these methods in your own writing, in teaching if you teach writing, both, or neither? Why or why not? If you use them in teaching, what sorts of responses do you get from students?

I definitely use these methods throughout my writing, in fiction as well as in poetry. I find that they are of a great help in teaching. They are a dynamic way to introduce students to new techniques or ways of writing, the students find them fun, and within the context of a workshop or class, they are an excellent way to jumpstart in-class writing, focusing the activity, giving the students something to explore.

Lately, I’ve been exploring an extended version of the Oulipo N+7 (or S+7) technique. I take a source text (often a poem) and then freely substitute the nouns and often the verbs, too, with words from a list of particular terms. For instance, I’d switch all the nouns and verbs for nautical terms. Then I might further switch some of those nautical terms with obscure words for colours. Then I keep working on it (editing, trying out other things) until I have a poem that I’m happy with. I often use the website Phrontistry.org which has many lists of really beguiling and unusual words.

Another thing I’ve done is to incorporate the “trending” topics from the right side of my Facebook feed.

I concerned that if I don’t steer myself into new ways of thinking and writing, I’ll just replicate the old ways.

Not necessarily, as long as I’ve observed the poem as it develops and not maintained my expectations or suppositions but rather followed what the poem seems to suggest, what possible interesting or fruitful paths the poem seems to be taking.

I should also mention that sometimes I take a poem that is written without any expectations or restrictions and subject it to some kind of transformation based on a procedure. Then I might freely modify it after that. I don’t believe in being a purist, but to go with where the poem seems to be going.

It’s true that using exercises or prompts doesn’t necessarily result in a great poem, just as not using them doesn’t either. However, it often pulls out of me a surprisingly subtle or more complex idea or emotion than my initial pre-poem state might have suggested. I find that engaging with material outside of my suppositions actually often results in a deeper engagement with the deeper concerns that I have at the time of writing, often concerns that my conscious mind has no idea of. The exercises or prompts are a kind of dowsing, a divination. Of course, so is writing a poem in general, as long as I don’t try to over-determine what the poem should be ahead of time.

Sometimes I sacrifice the Collected Works of Ron Padgett at a crossroads at midnight or I dress up in my John Ashbery suit and attempt to explain chainsaw maintenance to a French king. But frequently, I collaborate. I write poems together with collaborators or we trade titles, or each riff off a previous poem that the other has written, taking some element of the poem and creating a new one. I find that the dialogue with another is very generative. I engage with their aesthetics or way of writing (even if just to write a poem that I think that they will respond to or enjoy) and I pick up some trace of the way they write or think about writing.

I like the writing lines in between other writers’ lines technique for the same reason (and then erasing the source lines) or using the variety of online generators available (N+7, Markov Chain, Google Translate though a variety of languages) in order to create interesting new images or parts of poems. Then I have a beginning for another poem.

I also like to paraphrase other texts, looking at them slant from my perspective of 21st century Hamilton. I’ve taken Psalms, Middle English texts, the Criminal Code, a miscellany of poems from anthologies, and so on.
For me, the main thing is to have something to respond to, whether it be a word, a line, a poem, an event, process, person, or situation or modus operandi. For me, writing comes when I am in dialogue with myself and the world. I just need to find a way to begin the conversation.