Hello, and Happy September! Thanks to the excellent folks at Open Book for inviting me here, and thanks to you for tuning in, lovely readers-who-I’m-guessing-are-mostly-also-writers.

All right, let’s get to it. This first post is about cold, hard cash. Because that’s why we all got into this shiny, glittery literary business, am I right?

But anyway. If you’re a writer and you’re not in the habit of applying for grants, you need to get on that. Because it’s money! For your writing!

There are some programs with deadlines coming up soon (all funding literary works-in-progress intended for publication), so let’s look at those post-haste.*

*If you haven’t applied to these programs before, you’ll need to jump through a few electronic hoops first. For Canada Council for the Arts, you’ll have to get on “the portal.” For the Ontario Arts Council, you’ll need to set up a profile in Nova, their online grant-application system.

The next deadline for the Canada Council for the Arts Research and Creation component of Explore and Create is September 12, 2018. Yikes! That’s really soon. But don’t let that deter you because this program offers grants of up to $25,000!

The next deadline for the Ontario Arts Council Literary Creation Projects (Works for Publication) program is October 18, 2018. This one offers grants of $12,000.

I’m a big fan of the OAC’s Recommender Grants for Writers (formerly Writers’ Reserve). It runs from September 5, 2018 to January 16, 2019 and offers grants ranging from $1,500 to $5000. The best thing about this program (besides the money) is that you send your application directly to publishers and literary magazines (the “recommenders”). This is a marvellous opportunity because even if a recommender doesn’t award you a grant, your work might still attract the attention of a publisher or editor who may reach out with an offer to publish you.

Toronto writers can also apply to the Toronto Arts Council (TAC) Writers Program. Their most recent deadline was in June, but they also have an online system you could check out before the next one.

Now to the nitty-gritty.

While the process of applying might seem daunting at first, it does get easier with practice. Plus, even if your application isn’t successful, you’ll benefit in the long run by learning to think critically and objectively about your work. The three main elements of most applications usually consist of: 1) your publishing history, 2) pages from your work-in-progress, and 3) a description of your project.

In my experience, the description is the hardest part. The basic ingredients are: a synopsis of your novel or some stories or poems in your collection, the overall premise or aim of the work, the progress you’ve made so far, and how your current project relates to your body of work as a whole. Certain programs have specific requirements to address, so make sure to pay attention to those. It helps to start by simply making notes for yourself—brainstorm ways to describe your specific project and your writing in general—so you have something to work with. And it’s a good idea to ask an eagle-eyed person (ideally a fellow writer who’s familiar with your work) to read your finished product and make suggestions for improvement. (Then you can offer do the same for them.)

There’s no magic formula, sadly, but I’m happy to share two descriptions that did the trick for me:

From My Successful 2005 Ontario Arts Council Literary Creation Projects (Works for Publication) Application for Pulpy and Midge (when I applied, this program was called Grants to Writers for Works In Progress)

Pulpy and Midge is a novel of literary fiction about learning how to be in love. It spans two weeks in the life of Pulpy and Midge, a married couple, and is told from Pulpy’s point of view. This story also looks at the intersection of private and public spaces, and the havoc that insecurity can wreak on intimacy.

Pulpy used to be Brian Lembeck, until he was christened “Pulpy” in college. He works at an office under Al, his laid-back boss, and is the bitter receptionist’s only friend. Pulpy’s wife Midge is trying to earn a living as a candle party hostess—she quit her 9 to 5 job to pursue this dream when Al’s dog ate her pet pigeon and Pulpy was promised a promotion as a result.

Pulpy is caring but spineless and Midge is sweet but insecure, and despite their love for each other their combined foibles have weakened their marriage. As Al’s retirement looms and the promised promotion doesn’t appear, Pulpy’s high level of anxiety increases and Midge’s small supply of confidence plummets. Then Al hands the reins to Dan, the tyrannical new supervisor, and things get worse. Dan and his wife Beatrice do a workplace overhaul, installing Pulpy as head of the new Social Committee (with no pay raise) and making life even more miserable for the receptionist. She turns to Pulpy for comfort and then tries to take things further, which sets off Midge’s jealous streak. At the same time, Dan and Beatrice’s marriage is rapidly unravelling and they’re intent on dragging Pulpy and Midge down with them. Their increasing invasiveness, which ultimately leads to an attempt at spouse swapping, upsets Pulpy and Midge’s routine and threatens to destroy the fragile ecosystem of their relationship. As a result, Pulpy is inspired to get a backbone, and Midge recovers her self-esteem.

Pulpy and Midge is also about finding joy in the mundane. It celebrates “ordinary” people and how they make their mark on the world. “There are things that I do that are important,” the receptionist tells Pulpy. Midge collects real-estate agent magnets and starts a house fund with her candle-party money. Pulpy is content to let life happen to him, until his situation gets so far out of his control that he has to take a stand.

From My Successful 2013 Canada Council for the Arts Research and Creation: Explore and Create Application for Things Not to Do (previously titled Gazebo Times) (when I applied, this program was called the Mid-Career Writer Creative Writing Grant)

Gazebo Times is a short story collection-in-progress. As part of my application, I have submitted three stories that will be included in the collection. “The Lesson” is a monologue spoken by a seasoned wedding DJ addressing the new recruit he’s training on the job, and who detests those women he feels always try to hijack his song lists with their numerous dance-floor requests, personified by one female wedding guest he singles out with a menace that grows over the course of the evening. “Everyone Here Is So Friendly,” told in second person, is about someone who escapes a miserable, tormentor-filled past and arrives in a bright, shiny new present full of eager new friends and adoring fans, but is too insecure to enjoy it. Lastly, the title story “Gazebo Times” peeks into the lives of several people—both victims and perpetrator—caught in the midst of a food-court shooting.

I am approximately midway through this project. In addition to the three stories submitted, I have completed three other new stories to date. “At Kimberly’s Party” (3 pages) is told in the first-person-plural point of view from the combined consciousness of a group of high-school “frenemies” who are indignant over the distance between them and the successful adult version of their former teenage doormat. “He Will Speak to Us” (14 pages) is told from the point of view of the bitter father of an unnamed, Justin Bieber-esque superstar and takes place in a giant concert arena, where thousands of preteen girls wait for their idol to appear on a huge screen to apologize for accidentally killing one of his fans during a game of laser tag. “Dumpling Night” (6 pages) is about a “heavy” employed for security at a private family outing to a Chinese restaurant—he’s a family friend who desperately wants to belong, and is in denial about how the people he loves take advantage of him.

I’m currently working on two more stories: “In Real Life” is about a woman in an unhappy marriage who spots a minor celebrity in her local bar and starts to unravel as she increasingly obsesses over him. “So Bright and Full of Beans” is told from the point of view of an infant, and plays with the parental fear that babies are actually paying attention to everything, and understand much more than we give them credit for.

With Gazebo Times, I’m excited to continue exploring the minds and lives of characters similar to those I dealt with in my first collection And Also Sharks—lonely, angry, and unfulfilled “losers.” However, in Gazebo Times I will switch my focus (in some instances) from the bullied to the bullies, imagining their motivations for treating their fellow human beings so badly. My aim throughout is to make outwardly unlikeable individuals likeable, or at least sympathetic. I’ll also examine various incarnations of fame (and infamy), and the inevitable pitfalls that accompany being “known.” I’m fascinated, and a little frightened, by the seemingly universal desire to become famous for anything, at any cost.

In this project I’ll return to my preferred combination of humour and sadness, but will venture into even darker territory, occasionally blurring the lines between reality and fantasy through certain characters’ skewed perceptions of the world around them.

Remember, if you miss any of these deadlines, don’t fret! There’s always next time. And there’s more cold, hard cash out there, if you search for it. Here are a few links to get you started:

"A guide to writing prizes for Canadians" from CBC Books

"Awards and Competitions" from the Canadian Authors Association

Now, go forth and apply! Here’s me and Tiffany, sending you mega-grant-getting vibes. 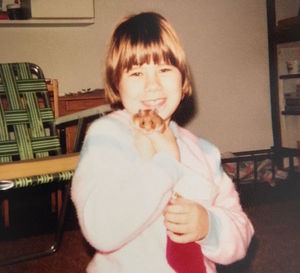