Writing, for me, often begins with an image. By this, I mean not an imaginary image that appears in the mind’s eye, but rather an actual photograph I stumble across in my daily life. A certain picture that catches hold in my brain and unsettles and haunts me.

Fifteen years ago, when I was at grad school studying American modernism, I took a seminar on theories of photography. Susan Sontag, Walter Benjamin, Roland Barthes and other such cultural philosophers were featured on the syllabus. Barthes’ Camera Lucida, a slim, elegant book that he wrote at the end of his life, stirred much controversy in our group for its celebration of the unabashedly subjective qualities of photographic experience. Barthes calls this aspect the punctum, by which he’s referring to the specific, odd detail of a photo that arrests our gaze and stirs our emotions, without being reducible to historical context or aesthetic composition. “[I]t is this element which rises from the scene, shoots out of it like an arrow, and pierces me.… A photograph’s punctum is that accident which pricks me (but also bruises me, is poignant to me).” A slippery concept no doubt, the punctum may indeed be different for different viewers; it’s inescapably subjective, deeply personal. Not so useful for academic discourse perhaps, but I left academia, in the end. And as a novelist today, I find this notion aptly captures the idiosyncratic pinprick of emotion and life, embodied in photography, which for me can be the beginning of everything. So, in a little homage to Barthes, let me share one particular photograph that’s offered inspiration to my writing. 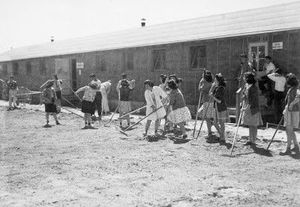 My father sent me the above image, which he found by googling “Minidoka,” the camp in Idaho where his mother had been interned during the Second World War. “Your grandmother is in this photo,” his email read. “Third girl from the right, in profile. Zoom in.”

And there she is. Had the camera caught her a second before or after, her face might have been obscured, like the girl on the far right. I found myself fascinated by the styling of her hair, as I wondered how, while living in an internment camp, she’d managed to keep it softly curled and glossy. Imprisoned and made to rake mud, my grandmother would not let herself go to seed, and although that should have made me happy perhaps, it made me indescribably sad. And while the other girls are working, she appears to me to be only pretending to work — something about the whimsical tilt of her head. Caught in a moment of fantasy or denial, her mind a thousand miles away. (Or perhaps this is just me projecting that she possessed such survival strategies, because this takes the edge off the bleakness of what her life had become?)

Whatever the case, all the frailties and defense mechanisms of the woman I knew as my grandmother appeared to be encapsulated in that one image. She was a complex, cryptic woman. At her choice, I did not see her often, when I was a young child, but as I got older, I began to visit her a bit more regularly at her house filled with Japanese artwork. She shied away at all costs from talking about the past, even when my father would press her, until the final days of her life, when she began to give in, in fragmentary stutters. After the internment, too, her life had not been an easy one, to say the least. A violent marriage to a mercurial man, who eventually killed himself, had marred her life. She struck me as a woman never quite prepared to be a mother or grandmother, preferring to play the role of a younger aunt, dressing half her age, in bright, form-fitting clothes, dramatic jewelry. It made a lot of sense to me to find out that she’d been a beauty queen during her adolescence; she’d competed in the Cherry Blossom Pageant, a beauty contest for the Japanese diasporic community on the west coast. And it was as though at some level, she still wanted to remain a girl, as though some beautiful moment in her teenage years had been stolen away, by the bombing of Pearl Harbor and subsequent internment. That photograph, I felt, managed to illuminate not only who she was in her youth, but also the woman she’d later become, and continue becoming, until her death. The image stirred in me a feeling of capaciousness — this sense that I could go deeper and expand my understanding of her as a character, for pages to come. And so, I was introduced to the heroine of my first novel, Lily Takemitsu in After the Bloom.