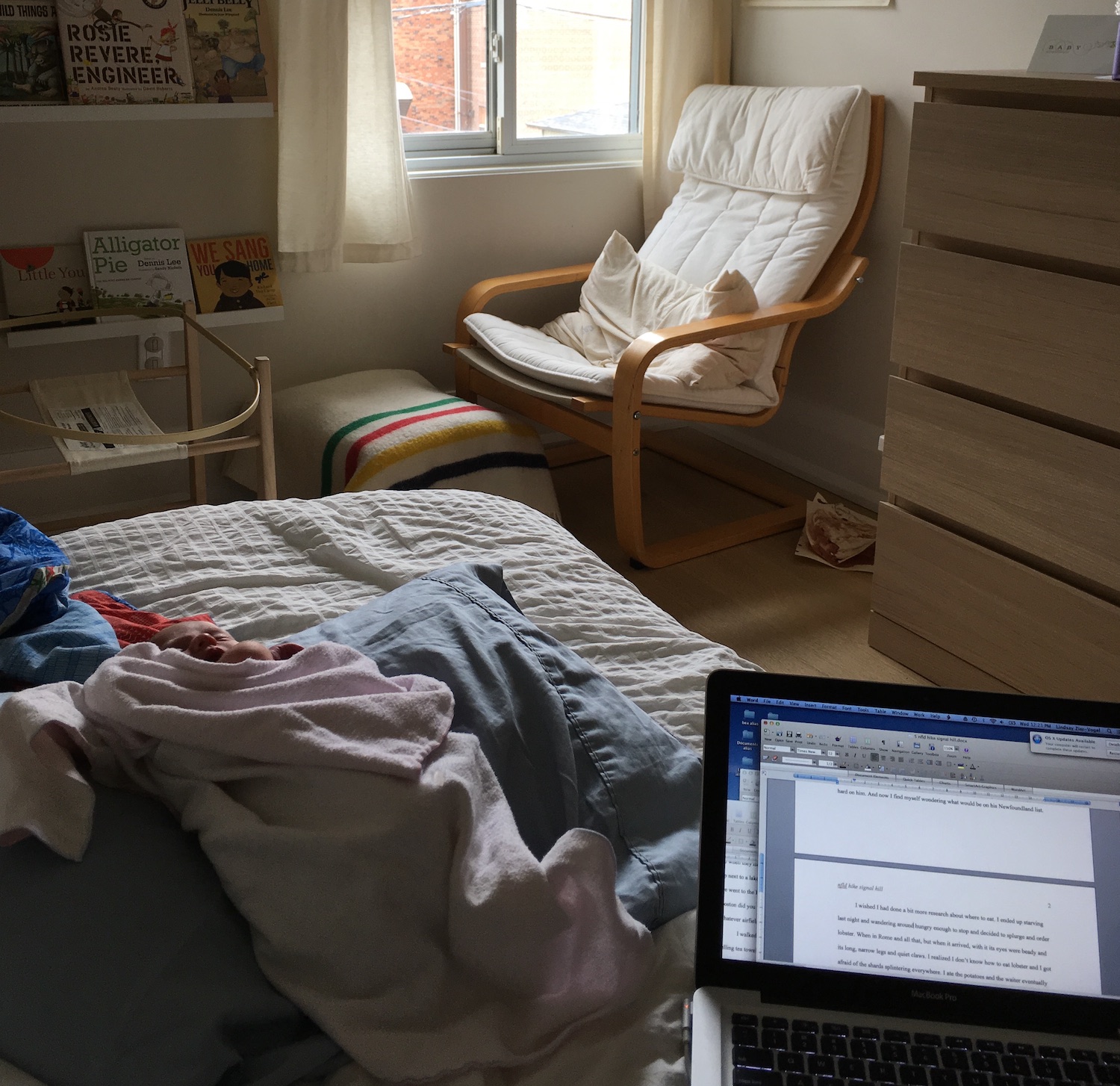 Years ago, long before I had any kids, I read that Alice Munro wrote when her baby napped, so when I was pregnant with my first kid, I told myself I’d do the same. It was 2015, six years before my first novel would be published, and I was terrified of losing my identity as a writer, that was tenuous at best. I had published bits here and there over the years, but my MA classmates had books (PLURAL!) under their belts and I had half-written novels that I’d edit and edit and edit (and edit). I had to write. I had to, and so, out of sheer terror that I was going to be become “only a mom”, I kept on writing.

I had visions of being THAT mom, the mom who used her mat leave to write a brilliant novel. That was the daydream that kept me from existential panic after a 2am nursing session in the pitch black. Who was I if I wasn’t a writer? The question looped every day that I didn’t write, the question that got loudest at 4am, but always hummed in the background, while I roasted sweet potatoes to purée, while I sat in bed with the perverted moan of the breast pump, while I walked in small circles around my neighbourhood listening to Ira Glass break up the world into three manageable acts.

“Write when the baby sleeps,” I’d tell myself, insisting I didn’t need to nap even though it had been months since I’d actually slept more than a few hours in a row. That’s when Alice Munro wrote, and if she could do it, I could do it. So I did. I wrote. Except Jack didn’t nap, not really. It’d take forty-five-minutes to get him down for a fifteen-minute nap. The ratios were wrong. The ratios were ruining me, but still I insisted on writing. I had to write. If I didn’t, I was going to lose even more of myself.

I wrote with tears streaming down my face, not so much crying as exhaustion pouring down my cheeks. I wrote because I didn’t know who I was otherwise.

And then, when Jack was ten months old, I printed off everything I’d been working on—a novel about a lifeguard who was terrified of drowning, who sat on the edge of Lake Ontario every day, watching geese and swans and the occasional kayaker. It was terrible. It was worse than terrible. It was choppy and disjointed and unreadable. Of course it was. I’d written it in fifteen-minute windows of delirium, always expecting Jack to wake up, always waiting to be interrupted. And I was. I was always interrupted.

When I was pregnant with my second child, I knew I could not write a novel. I knew it wouldn’t be worth it. I would sleep when the baby sleeps like everyone says. I would stare at the wall. I would watch “The Good Wife”, all seven seasons.

And then, just before she was born, I remembered fragments of a project I had started and stopped a million times over. It was a bunch of letters that a character named Claire wrote to Amelia Earhart. Then I had my baby and named her Claire.

At that point, my identity as a mother was fixed, and the kind of mother I was was already established. I didn’t have the energy to fight it. I was a mom. And I was writing. I wasn’t a writer (in the way I wanted to be) yet, or maybe I was, but I thought maybe this time I could write, or at least try.

I figured, though, that I could write letters in the small tiny pockets of a nap—a page, maybe a page and a half. That I could do.

The character that was named Claire became Grace, and suddenly, she was pregnant, something I couldn’t fathom writing about when I was pregnant, but now, firmly on the other side, it was fascinating to write about. One step beyond, it was easier to look back. I started writing letters in the tiny windows when Claire (the baby) slept.

And then she slept. Claire slept. For two-and-a-half years she’d nap easily and soundly. She slept on me, or next to me, and I’d write a letter, or two, or three, on my computer, on my phone, on a scrap of paper. I didn’t read them for months, I knew better, but I wrote letters.

I didn’t have a novel at the end of that year, but I had the letters that would become “Letters to Amelia”, but more than that, I had my identity intact. I was a writer. I was a mom. I realized that with strong enough boundaries, I could be both.