Full disclosure: I don't play Dungeons & Dragons, much as I'd like to. However, I've read a few D&D-based novels and enjoy watching others play the game, so I was pleased to stumble upon a fun D&D-inspired way to develop fictional characters.

If you're not familiar with the concept of "alignment," let me explain. In Dungeons & Dragons, alignment is a way to characterize players based on their ethics and morality. It's the way they see their world and their place in it. Because D&D is a role-playing game, knowing a character's alignment can give its player valuable insight on how they'll play their chosen character - how the character behaves, and why. 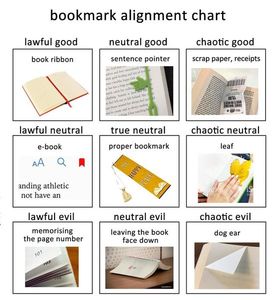 There are nine categories, expressed in a grid: lawful good, neutral good, chaotic good, lawful neutral, true neutral, chaotic neutral, lawful evil, neutral evil, and chaotic evil. Even if you don't play D&D, you may have encountered the alignment system before, thanks to internet memes. The "bookmark alignment chart" is a favourite of mine that I think you'll appreciate too.

Even if concepts like "lawful" and "evil" don't exactly fit with your own writing project, you can still use these concepts to help you get a deeper understanding of your characters. Here are some examples of how some of the D&D alignments might work with characters in a non-D&D novel:

Traditionally, lawful good characters are full of honour, duty, and compassion. They value order, speak out against injustice, and help people in need. Maybe your lawful good character is an athlete who always plays fair and doesn't over-celebrate when scoring against a weaker opponent. How would this character react if they were offered $10,000 to throw their next game in a match-fixing setup?

Some lawful good examples include Luke Skywalker, The X-Files' Dana Scully, and The Wire's Kima Greggs.

Talk about living by a code! A true neutral character acts altruistically, not terribly concerned about good or evil, law or chaos. Whether it's out of indifference or a true belief in being nonjudgemental, they focus on what's right for them or those they care about. Maybe your true neutral character is a "digital nomad," traveling from place to place based on what takes their interest, leaving when they want to pursue something different. How would this character react if their hostel roommate told them about a way to break into a swanky hotel room unnoticed?

(And, between you and me, I've been working on writing a true neutral character for a couple of years now - it's sometimes infuriatingly difficult but so much fun!)

This feels like a very over-the-top villain: They do what they want without regard for laws, the feelings of others, or the ramifications of their actions beyond furthering their own goals. They can hold a nihilistic view of the world, and believe that you may as well do what you want. Maybe your scaled-down chaotic evil character has been elected as president of their small town's community improvement committee. What do they want out of this position? What are they willing to do to achieve this aim? What conflicts will they have with individual members, and how will these conflicts resolve?

Some chaotic evil examples include Gollum, The Matrix's Agent Smith, and The Queen of Hearts in Alice in Wonderland.

Figuring out your characters' alignments

If all of this has piqued your interest, great! For me it was a fun way to get to know my characters better, and break out of a creative block. The fun thing about these character alignments is that they can be fluid - for example, the story of your neutral good character's journey to lawful evil can be an entire novel in itself.

You can read more about D&D alignments here, and take an alignment test on your character's behalf here.