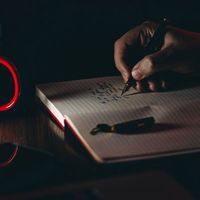 As I mentioned in a previous post, I'm fascinated by other people's writing routines. Not only am I just a somewhat nosy person (as many writers are, I imagine), but I don't have much in the way of a set writing routine myself. I float from disciplined, up-with-the-sun writing, to evening writing as the sun sets and I'm starting to feel quiet and contemplative, to scribbling in my notebook throughout the day and opening my Scrivener app to write a couple of paragraphs in between work projects.

Whether or not you're a fairly routineless writer like me, maybe you share my fascination with writing routines. For me there's something comforting about them, a shared commonality of experience even if the particulars are wildly different. We all have the same end goal, and the myriad ways we get there shows me that there's a place for my particular style.

Here are some of my favourite writing routines, paraphrased from various interviews and articles.

Most of what we know about Austen's writing routine comes from letters she wrote, and the memories of her family. She wrote by a dining room window, where she could observe the goings-on around her. She wrote early in the day, but wasn't limited to just the morning. She wrote when she had time, when she wasn't doing things like taking walks and playing cards.

Wrote late at night, from after dinner to about 4am. This was a habit he'd picked up earlier in life, when late nights were the only times he could write, and it became a habit. He could be alone at night.

Wrote in the morning, getting up before dawn in the early days so she could write before her children woke up. Later, she kept up her morning writing as she found she was more clear-headed then. She also had a daily pre-writing ritual of making a cup of coffee and watching the morning light come in.

Writes from about 10am to 6pm, trying to ignore the outside world until at least 4pm. Hand-writes the first draft purposefully to get the ideas out without worrying about anything else. Then, numbers sections and moves things around so the second draft starts from a solid foundation.

Wakes up at 7am and sees to a few morning tasks, such as walking the dogs, checking email, and making tea, before starting work. In the afternoon, her focus starts to slip, so she switches to editing or answering emails. She writes again before bed, for about an hour. She also writes that she has "a notoriously bad habit of shucking [her] routines," which makes me very happy.

These are just a handful of the many routines in the world. If you spend some time researching writing routines, you'll find they vary widely, from highly regimented, to bordering on negligent. To me, this indicates that a good writing routine is highly personal, based on a combination of preferences and work habits that compromise with necessity. My writing "routine" is influenced by a few things, including my day job and the vagaries of my mental health - and I know there are loads of other writers like me on this.

I've found what works for me right now, and I hope this has shown you that a good writing routine is whichever one gets your story out there!