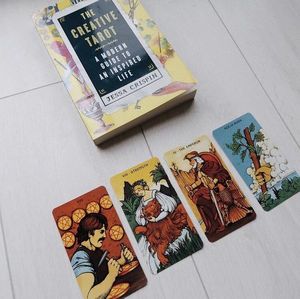 In my novel The Quiet is Loud, tarot cards form an integral part of the life of the novel's main character Freya Tanangco, a tarot reader. They serve as a career choice and legitimate outlet for her prophetic dreams and allow her to help others. But maybe more importantly, they also offer support and comfort for Freya throughout the years.

I'll be honest and say that the provenance of Freya's tarot cards is lost to me, but maybe they were always there. Maybe they appeared in my mind along with her, when she did. Maybe it was a subconscious excuse for me to revisit my own early love of tarot cards.

I first discovered tarot as I think many do - as a teenager with witchy aspirations. Tarot was presented to me in a strictly occult way, and I thrilled to the idea of even touching the cards, maybe brushing against the spirit world and whatever terrifying excitement was to be found there.

But of course, tarot cards aren't really like that. They're more like guides, a different perspective. An invitation to look inward and shine a light on your nature. And what sixteen-year-old really wants to do that? I lost interest.

Yet, despite packing my tarot cards away, they remained with me. I even moved them with me across the country at twenty-one, starting my adult life. In The Quiet is Loud, Freya moves her childhood deck across the country with her too. Before she decides on tarot reading as a career, she leaves her deck packed away in a box until she needs its guidance or its comfort. While I didn't turn to my cards as often as Freya did in those newly-adult days, I do remember digging my deck out of my closet now and then, sitting cross-legged on my bed, leaning over to my computer to consult the tarot websites for help interpreting the cards. Sometimes an evening visiting friends would end in a reading, which I reacted to eagerly, excitedly. I told myself it was just the second glass of wine talking, but maybe I remembered that early thrill of possibility. 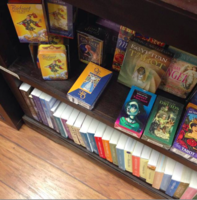 When I started writing The Quiet is Loud, one of the very first things I did was buy a new tarot deck. I walked into a store in downtown Oakville and immediately felt a long-forgotten familiarity. Incense, crystals lovingly displayed, faint and somewhat otherworldly music. I found the tarot cards and stood considering the selection, not touching any of them. I remembered what I'd heard as a teenager. The cards have to choose you.

In the end I went home with a Morgan-Greer deck, drawn to its earthy, 1970s art style. I spent a few days refreshing my memory about tarot, consulting websites and even online chat rooms like the one Freya works in. In the name of research I created a profile and logged in, hopping from tarot reader to tarot reader. In the name of research I observed and took notes - but also asked questions of my own.

As my writing deepened, so too did the tarot. It became impossible to me to imagine Freya without them. She decides to become a professional tarot reader because it's the only thing she can do without second-guessing herself, or without fear. Tarot cards are the support network of her life when she has none. She turns to them for familiarity when her world goes upside-down, she carries her favourites with her for luck, and she even sometimes equates the people in her life to the figures represented by the cards. In order to honour this aspect of Freya's life, I had to incorporate tarot as a vital part of my writing.

I wonder if the friend who gave me Jessa Crispin's book The Creative Tarot at this time knows how much everything changed after that. Not only was I writing tarot scenes for the book, but I was able to do readings for myself, as part of my creative process. And when you're absolutely stuck in your writing and can't see a way out, it really does feel magical to pull some tarot cards and find a new idea, a different perspective that comes from outside you.

I'm not a pro at tarot reading - I do casual readings for friends now and then but they're always accompanied by a book to help me refresh my memory. Yet, writing Freya helped me to remember the early love I had for tarot, and reminded me that sometimes inspiration and comfort come from very unexpected places. My Morgan-Greer deck isn't packed away in a box now. It's close at hand, a familiar friend I turn to often in writing and in life.