Yesterday, my first book of poems, Port of Being, was shortlisted for the 2019 BC and Yukon Book Prizes (BCBP), for the Dorothy Livesay Poetry Prize. I expected to feel happy but I feel disbelief. The kind of disbelief I’ve felt at Niagara Falls, or when standing beside old tall trees in Pacific Spirit Park.

Five years ago in 2013, I was a “tour coordinator” for the BCBP. This was the year that I got to talk with authors and send them around the province to visit schools, libraries, bookstores, and other venues. It was also the year I got to attend the BC Book Prizes gala at the Governor General’s house in Victoria, BC. I remember ironing the navy banners with my workmates and hanging them from the balcony. Flecks of sunlight skipped off the chandeliers. The ocean glinted in the distance. Later, when we returned, I welcomed authors and directed them to the dining hall. I saw Yasuko Thanh, Larissa Lai, Colin Browne, Anakana Schofield, and Sarah de Leeuw. Everybody was so happy. I was cautiously feverish, hoping I didn’t guide anyone the wrong way in my excitement or keep them in conversation for too long. I was stunned to see months of work in the office finally shine in this one evening. How was everything seemingly falling into place? I felt disbelief then and I feel it even now.

Disbelief on a happy occasion is probably not healthy, but the kind of disbelief I'm feeling has the same texture as awe: that feeling where words fail and what you’re experiencing is much bigger than you. The book is much bigger than me. Even though I sat down and wrote my book alone, I wasn’t really alone.

When I was working with Leigh Nash, my publisher at Invisible, I didn’t expect my perfectionism to rear its head to the point where I couldn’t sleep at night. Somewhere on the journey of preparing my book for publication, I forgot that it’s a collaborative process. It was surprising to feel this way, because I know it’s a collaborative process, having worked on the other side of the desk. I was even editing other books at the same time, so you would have thought that I would remember the collaborative work that goes into a book! I forgot. In glimpses, I would remember that I am not alone, even though the writing of it happened alone.

In 2017, the manuscript of Port of Being received the Robert Kroetsch Award for Innovative Poetry, judged by Wayde Compton — one of my favourite poets, whose work gave me so much hope, especially when I was just beginning. I would see Wayde at the Vancouver Public Library almost every Sunday and I’d smile and wave and hurry away, too nervous to speak. You can imagine what the award must mean to me.

At that time, I’d been clean for two years at least (I’m a recovering addict) and I couldn’t risk falling into another abyss. I knew I had to ask for help — one of the things I’ve had to learn and relearn throughout my life. I emailed Erin Wunker, Fazeela Jiwa, Laura Ritland, and Domentica Martinello, women I knew from our work together at CWILA. I told them I’d withdrawn the book and didn’t have a publisher, and I straightforwardly asked them what to do. Erin responded quickly and connected me with Leigh. She thanked me for trusting her enough to share what had happened with her.

While preparing Port of Being for print in spring and summer 2018, I remembered Leigh’s integrity and badassery. My debilitating perfectionism slowly began to dissolve. It was a matter of trust. I was with someone who understood things deeply, whose care is as perceptive and honest as her copy edits. She has come through for me in ways I couldn’t have imagined. A book isn’t one person’s writing. A book is a community.

I felt this sense of community when I went on book tour to Ontario. Writers like Erin Soros offered their couches. I stayed with Leigh and her partner, Andrew Faulker, and their little cutie. People like Tamara Jong and Jagtar Atwal drove for a couple of hours to make the Invisible book launch. Kelvin Kong brought spare scarves for me because I had stupidly taken only one outfit and three T-shirts (and seven books), and ended up wearing everything I packed because it was minus eighteen. Canisia Lubrin offered her couch and mangoes. Jim Johnstone (Anstruther Press publisher — my chapbook publisher!), Natasha Ramoutar, Dominik Parisien, Del Cowie, and Sanchari Sur came to the launch too, as did so many others. Fellow Invisible launch-mates H.B. Hogan and Susannah M. Smith gave endless hugs. I couldn’t believe it. 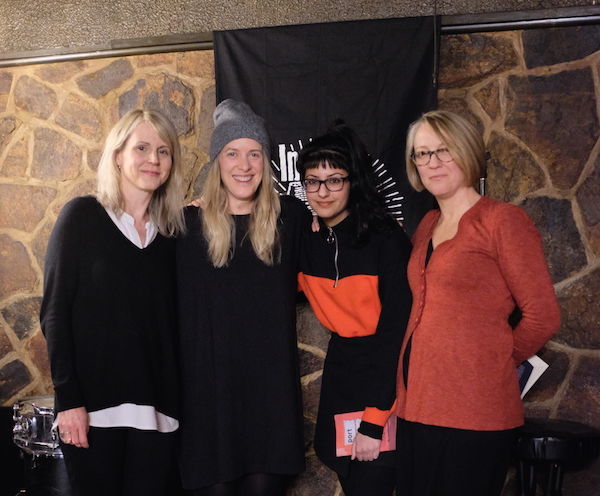 I was in disbelief in Vancouver, too, where I’d launched a month earlier in October 2018. I remember the rising dread I felt after reading emails from people letting me know they wouldn’t be able to make it. I thought that no one would come. People came. Juliane Okot Bitek came, Dina Del Bucchia came, Ian Williams came, my classmates Kailash Srinivasan and Yilin Wang came. Jen Currin, Junie Desil, and Kevin Spenst read with me. All the people who mean so much to me were there. I am still in disbelief.

It sometimes scares me that I don’t think I actually feel “happiness” in the sense of joy. I feel disbelief when I’m happy. In a convoluted way, perhaps years of shame, trauma, and addiction make me feel like I don’t deserve to be happy, but I don’t think that's the root of this disbelief. What I’m feeling is awe — not towards waterfalls or trees, but towards community. What I’m experiencing is much bigger than me. It’s the work of many, many people.

Thank you for being there in every way, awesome friends.