I have had a Rider-Waite Tarot deck since I was in my late teens, being a Joy Division-loving goth girl. I even had a Ouija board that I would hide under the mattress, in case my Allah-loving parents saw it and disowned me. In the career test we all had to do in high school, I got what I expected: teacher, writer, journalist, psychologist, photographer, activist, but I also got “psychic.” I am not about to extol my spiritual journey, but I will say that I am glad for this time in my life, when I got to the know the Tarot at a superficial level. Tarot became useful much later, when I realized that I was writing the same story over and over and over… 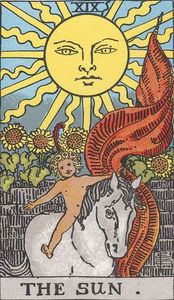 I was writing the same story repeatedly because I was traumatized. I am still traumatized. A couple of years ago, I didn’t understand why all the different stories I wrote ended up being about the same thing. (Please excuse my ambiguity here; I would prefer not to talk about the specifics, in case I traumatize myself again.) It didn’t matter if the protagonist was a man or a woman, or if the story was set in Vancouver, Toronto, or Thunder Bay, the story was essentially the same. I was stunned. I understand obsession, because I am an obsessive person and I enjoy my obsessions, but this was different. It wasn’t obsession.

How would I break out of myself and write a completely different story? Even now, even when the slightest sign of trauma is felt in my body, I get stuck in the same groove and write the same story. I decided I needed a method. Like the psycho-geographic concept of the dérive that takes me on poetry walks, allowing me to amble aimlessly so that I can experience the city and myself anew in the light of the ambient, unexpected, and unpredictable, the Tarot would disorient me in a similar way. It was the defamiliarization I needed! It taught me that I enjoy the conceptual immensely and that I needed to get complicated before I could get real.

The trick was to become extremely involved in constructing character arcs and in forming the cause-and-effect chain of story based solely on readings; one thing had to lead to another based on the readings, not based on what I wanted to tell. Essentially, I was trying to get out of the way of myself in order to find my characters.

I start a story by pulling three cards: 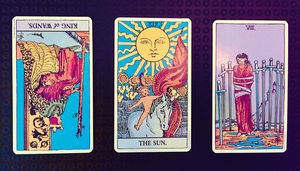 1. The first card in the centre is my character’s “desire.” This is what they want.

2. The second card to its left is my character’s “inner journey.” This journey is made up of the trials and moods that my character has to endure.

3. The third card to the right of the centre card is my character’s “outcome.” This is where they end up after pursuing their desire (card 1) and after enduring their inner journey (card 2).

This three-card method is complicated enough for at least a couple of hours or more of character development. It beats any character development questionnaire. I haven’t imbued my readings with any spirituality or symbolism. I’m simply playing, as if I were in a Tetris game, but in the forest in the dark, with myself as a T-block…

Here is one “play” or one reading:

Biddy Tarot is the site I refer to most often, because of its in-depth analyses, which favour psychological readings, which then help with character development.

BT notes: Haste, ruthlessness, impulsivity, high expectations, suitable for brief liaisons and romantic encounters that are passionate but brief. Does not realize when they are crossing a line between being aggressive and being assertive.

BT notes: Isolation, self-imposed restriction. The feeling of being restricted is based on an intellectual and not an emotional assessment. Indicates that your interests will be opposed by other people but you need to take back your power, avoid victimization, and change your perspective.

I am currently listening to Laraaji, so let’s call our character “Lara.”

This could be a potential beginning for a story. Each of these three readings can be carried further to develop the character, with different echoes for the same cards (or switching out different cards in relation to shifts in the character’s desire or inner journey) introducing new changes, encounters, and experiences.

Often, my “outcome” changes, but I still need the initial “outcome” to give myself a clear path to work towards.

I know that there are many books and articles on the Tarot, such as Jessa Crispin’s The Creative Tarot, and I've yet to dive in and learn more about them. I came to this Tarot method one morning when I realized I needed an analytical chance-based technique to break patterns. It’s since been working to break me out of myself. It “works” because I wrote the same set of characters, but they became unpredictable and my stories finally found endings that surprised me.

This is not to say that I still don’t get stuck. In fact, I am quite stuck at the moment with my novel’s protagonist, who is so sweet and sad, but I know that I’ve broken a cycle before with stories and I know that I can do so with my protagonist. I am holding on because this protag is very close to me. One day, hopefully soon, I’ll be able to play with my mind rigorously enough to free all the characters.

This is my first post as Open Book’s writer-in-residence for March. I hope that reading this nerdy post has been worth your time. 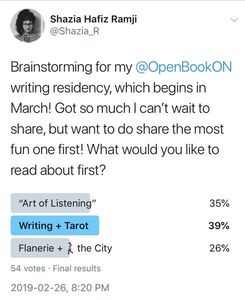 Super special thanks to all the fifty-four people who voted on my poll for which piece to post first! It helped me keep things brief and succinct, and it made me happy.

I would love to know what you think and how you work with Tarot: shaziahafizramji[at]gmail[dot]com or @Shazia_R