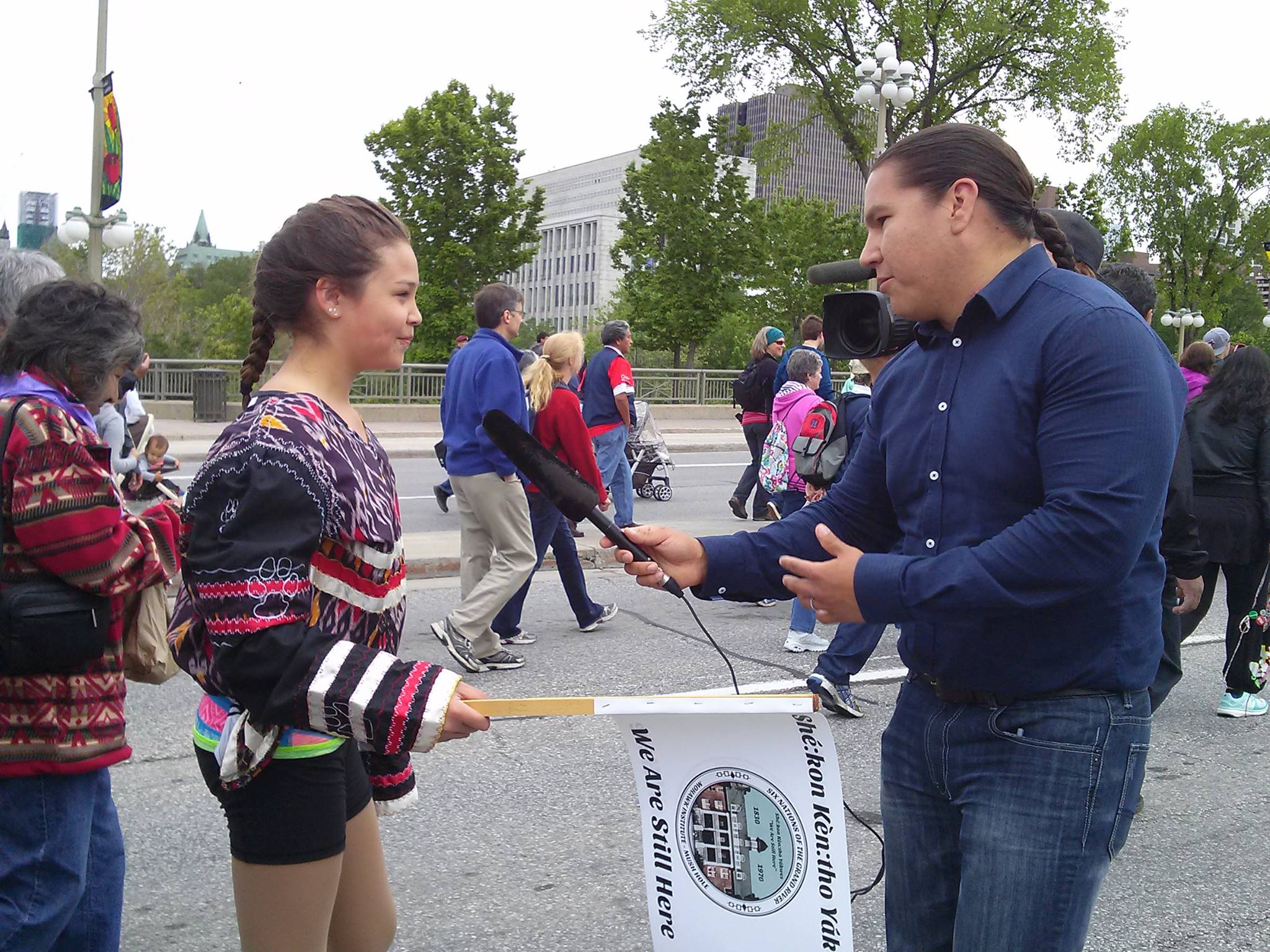 Interviewing a marcher at the Walk for Reconciliation in Ottawa, May 2015 (Sarah Onyango/Facebook)

While I am very fortunate to have established a career as a published author, it’s not my primary gig. I’ve been working as a journalist in a professional capacity for more than two decades, first as a freelance newspaper and magazine reporter while still in high school, and now as the host of a CBC radio afternoon show.

Most of my professional experience is in journalism, and it’s what I studied in school. I have a degree in journalism from Ryerson University. It’s a fun and unique career with an array of storytelling styles and structures, and in many ways, my journalism work has influenced my fiction writing and literary career.

I’ve been asked many times over the years how each writing and storytelling style influences the other. I used to give a fairly regular answer using a sports analogy, using the comparison of swinging a baseball bat and swinging a golf club and how each employs similar muscles and motions but different implements to achieve various but similar results.

The analogy was supposed to illustrate how journalism and fiction are both fundamental storytelling through similar skills and different methods. But for people who don’t care about sports, that illustration doesn’t really mean anything. It can also be a little confusing.

I now see it a much simpler way: journalism is about telling stories about real people to get other people to care, while fiction is about telling stories about made-up people to make real people interested and entertained. Each has its own challenges and benefits, and I’d say the real-life experience of meeting all kinds of people in all kinds of situations on a daily basis as a journalist has greatly strengthened my fiction writing. Journalism has taught me much more about the diversity, versatility, and beauty of the human experience, and that’s especially helped me develop characters in short stories and novels.

Again, I once saw them as two quite different storytelling and writing styles. The bulk of my journalism career has been as a broadcast reporter, which has a more straightforward and punchier writing style. Air time is limited, so it’s important to be strong and concise with your writing. It’s a skill I finely honed on a daily basis for many years.

On the other hand, I saw fiction writing as my opportunity to get more creative, and let the words flourish without those time and space constraints. I enjoyed being as descriptive as possible, with long passages of carefully constructed exposition. I took advantage of the literary space and didn’t hold back.

But Moon of the Crusted Snow is much more pared down compared to my earlier fiction. That’s thanks to my editor Susan Renouf, who encouraged me to apply some of my journalism writing skills to the story in order to help it move along much more quickly. It made sense to me; the novel is about a catastrophe and its impact on a small community. A post-apocalyptic story needs a much quicker pace than stories I’d written in the past. So the prose - especially in the back half of the book - is purposefully sparse. With this work, my worlds finally collided.

I’m sure it’ll happen again as my literary career unfolds. And now that I’m a radio host and no longer a reporter, I have more room for words and stories on the air. Perhaps that’ll influence my future writing as well. Either way, I’m very thankful and fortunate to have ended up in two very rewarding careers that sometimes intersect.