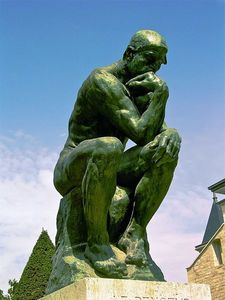 “The World,” Wordsworth wrote, “is too much with us.” That was in the early nineteenth century, before television, before ubiquitous billboards along roadways, before social media. These days, the world isn’t just with us, it’s in us.

As I write this piece, my son is playing a videogame on his phone while cooking his breakfast. As he would explain it, the bread is toasting; therefore, while he waits there is nothing to do.

Nothing to do, he says.

He’s right, but not in the way he thinks.

I remember in high school being punished for some minor offense or other with an essay. (Anyone else remember when writing an essay was considered an effective punishment?) “I’m assigning you an essay,” said my principal, Mr. O' Conner. “What are you studying in Social Studies?” “Nothing,” I replied, feeling like I had cleverly dodged the bullet. “Fine then,” he said. “You will have a 200-word essay on my desk tomorrow morning about 'nothing.'”

I went home imagining the pain of boredom I would experience staring at a blank page for hours. Instead, my mind turned that word, nothing, over and over in my mind. I wrote an essay that night titled “Nothing: Is it Something?” It was a meandering piece using every compound of “thing” I could come up with (nothing, everything, anything, etc.). It was silly, irreverent, almost a parody of an essay. And my principal loved it. So did I.

Boredom, at least among the young people I work with every day, is perceived as wasted time. Entertainment, in contrast—even when it doesn’t produce any lasting effect—is used time. If we have used time, rather than wasted it, we have benefitted. Or so the thinking seems to go.

But what is happening when we actually do nothing? When we daydream?

It used to be that researchers used the “resting brain” as a control, a baseline to contrast with the measured regions of the brain activated by various tasks like reading, creating, speaking, and so on. More recently, however, researchers have discovered that there really isn’t a “resting” brain, per se, but that different parts of the brain are always active and connecting to one another.

The question is not whether we’re thinking, but how, and about what?

A study published in The Journal of Neuroscience, for example, concluded that “human intellectual performance is likely to be related to how efficiently our brain integrates information between multiple brain regions.” They found greater measures of intelligence among subjects whose different areas of the brain were most connected, in particular the frontal and parietal lobes (the lobes associated with conscious thought and sensory processing, respectively).

Another study by researchers at the University of Pennsylvania concluded that people who were bored tended to perform better in creative tasks than those who were “relaxed” or “elated.”

In David A. Robertson’s middle grade novel, The Barren Grounds, 12-year-old Morgan is kicked out of class. She

“wished that she’d brought a book with her to kill the time. Instead, she imagined how Emily would steal the drawing pad. It became a fantasy adventure heist. The class was full of snow, like the scene in her head that morning.”

Morgan’s brain, freed from focused attention, is able to imagine.

Is it any wonder, then, that some of us get our best ideas in the shower, where our skin is tickled and our ears are filled with the white noise of the running water, where there is nothing to focus our conscious attention? Indeed, people like Warren Buffet and Bill Gates make sitting alone and thinking part of their daily routines.

Boredom is not the enemy. In a way, boredom is something like hunger. Not giving ourselves room to be bored is like eating all the time—an unhealthy choice! Hunger is a signal that we should eat. Similarly, boredom signals to us that there is something unfulfilled in us. The University of Louisville’s Philosophy professor Andreas Elpidorou tells us that “Boredom is both a warning that we are not doing what we want to be doing and a ‘push’ that motivates us to switch goals and projects.” Many of us stifle that imaginative, creative impulse by filling our time. Like a pacifier to a crying baby, we offer ourselves temporary respite from our boredom without addressing our actual need. Allowing ourselves the space to be bored both clarifies our needs for fulfilment and fosters connections we might otherwise have missed.

The “Big Bang” theory, the creation story—these tell us about something coming from nothing. All creative work imitates that pattern. Where there once was nothing comes a word, an idea, and then “there was light.” Are you a creative? Start with nothing. Forget marketing. Forget the craft. Put down the how-to book, at least for a while.

Instead, as you plan out your day, schedule “Nothing”. Turn off the television. Take out the earbuds. Leave your phone behind. Get outside and find something to stare at. Schedule time to be alone, somewhere where your senses are stimulated but your mind can wander. Make sure you have nothing to do—something good will come of it.