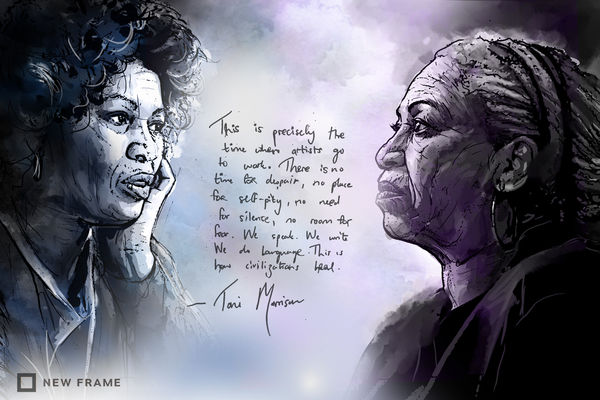 “Don’t tell us what to believe, what to fear. Show us belief’s wide skirt and the stitch that unravels fear’s caul.” – Toni Morrison

Fear of the first draft, fear of spiders, fear of getting it wrong, fear of my book being trash, fear of my book being good, fear of my friends and family telling me not to quit my day job (but not like I could, anyway)—we can’t escape this never-ending, constantly growing vine that can so often stop many of us writers in our tracks before we even get started. For me, no matter where I am in my creative process, the fear is always there. When it goes away, it only comes back completely reshaped; disguised. I’ve learned to embrace this predictable metamorphosis.

Almost ten years ago, I was working two part time jobs. One as a supervisor at a coffee shop, the other as a library assistant, and I was contemplating adding a third part time job to the mix. I was writing, but I wasn’t doing anything with it. Between working, being a single parent, dealing with some terrible toxic relationship stuff, writing and publishing seemed too far-fetched, at least at the time.

I was walking my then eight-year-old to school. We had a lovely scenic climb through Champlain Heights every morning. We talked about all kinds of things like Rainbow Loom, Harry Potter, and what was going to be for dinner. As we continued our hike, Oliver stopped and said, seemingly out of nowhere, “So are you applying to that writing school or what?”

Kids are intuitive. They see things, hear things, and most times it seems like they know more than we do. I had been contemplating applying to the Writer’s Studio since stumbling upon the online application one night after an exhausting double shift, but I just felt … scared. The fear was rooted in a few things: it was partly planted in the financial part of going back to school (I was still paying off my first student loan from 1999), in the fear of the unknown, but most of all, it was incredibly difficult to focus on myself, my writing, my career, when I had spent my entire life taking care of everyone else. I applied to the Writer’s Studio that night.

Last week, I decided to work on my novel edits at the end of an incredibly busy day. I opened my laptop, aligned my collaborators (blanket, coffee, snack, stack of books for comfort) and I started to read over some notes I added the previous night about one of the characters. One of my notes to myself said: “I am not sure I can write about race in this way.” That’s all my note said. Looking at this cryptic note I’d written only twenty-four hours earlier, I felt a weird sense of dread pulse through my body. It was happening again. I started to second guess myself, and the domino effect of made up scenarios began to populate my brain. I emailed my trusted writer friends and mentors, vomiting my fears. I typed everything in all caps and confessed that maybe I was the wrong person to write this book, and maybe I got all of this wrong, and maybe I should just stick to memoir. In hindsight, this was just fear trying to hinder me. The “maybes” were the only bits holding me together.

I am constantly asked how I overcome fear when I’m writing or how I tackle it. The truth is, I don’t. I welcome it in because I know that even if I try to fight it and am successful, I already know that it’s a temporary victory. It will come back thicker, darker, stronger (or, maybe that’s just true of shaving body hair?). At least, this is how I see things. I know that it’s totally OK to fall into the fear. To let it wrap you up for a bit. I initially felt silly almost immediately after sending these frantic emails to folks about my novel, but then I remembered that this is also part of my process, I have to let these acts play out so that I can eventually step back, evaluate the carnage, and plan the necessary pivots.

But what do you do if the fear literally stops you from writing in the first place? What if the fear is there right from the beginning vs showing itself halfway through? What does the writer do then? Giving up because of fear is an insidious problem. I’ve learned very early on that I need to write to the fear and have an in-depth conversation with it. I need to sit across the table from it, buy it dinner, and maybe a drink. The last time I did this, I ended up with ten pages of pretty interesting inner thoughts which I then used for one of my characters! Jackpot! From this writing, I was left with hope. And hope is a helluva lot stronger than fear.

At the very least, facing fear and sitting with it will show most of us how to write about it. My advice to newer writers who are battling fear and it’s stopping you from doing the work you were meant to do, hang out with it for a bit. Chances are, you’ll learn a thing or two. Fear is necessary for me. It keeps me on my toes, deepens my writing, and reminds me why I started writing in the first place.