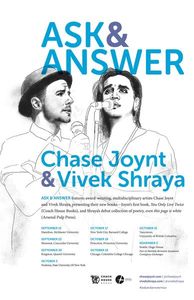 In the spring of 2015, I became aware that fellow multi-disciplinary Toronto artist, Chase Joynt, was publishing his first book, You Only Live Twice. A long time admirer of Chase's work, I immediately emailed Chase to see if he might be interested in touring together, as my book, even this page is white, was slated for release at the same time. This began a series of emails and eventually dinners at Fresh, where we explored what a live collaboration might look like.

This fall, over a year later, we have had the wonderful opportunity to tour together across North America. Given the name of our tour—“Ask & Answer” —we decided to present our post-tour reflections in the form of answering each other's questions.

We brainstormed many tour titles in one of our many Google docs (including “We Love to Process” and “How Many Selfies”), but eventually we came up with "Ask & Answer.” What is the significance of this title for you?

To begin: I think that our proposed tour title was actually “How Many Selfies Does It Take?” and the answer to that question—I have recently learned from you—is MANY. To me, the significance of “Ask & Answer” has changed considerably over time. Originally, I imagined our works to be approaching similar questions—of gender, family, nation, media, love, sex, race, isolation—through different formal means: my project through collaborative creative nonfiction, and yours through poetry. However, being on tour together has revealed alternative meanings, as our various audiences have assumed different orientations to both our bodies, and our work. How do race and gender impact what kinds of questions that are asked in public, to whom, why, and how? Our original tour title, “We Love to Process,” is hilarious to me because it remains the most accurate articulation of our alliance. The intersections of our work and our identities, has demanded a level of accountability and conversation between us that feels both vulnerable and necessary.

You’ve toured a lot in the past few years, with many people, I wonder if touring ever changes your orientation to your own work?

Absolutely. My hope for even this page is white, for instance, was for the poetry to feel like a conversation. But performing the poems solo, the work doesn’t always feel dialogic. Our tour, and the way we have constructed our show,has a call and response feel with each other's work, which immediately re-contexts my work.

While every show is always a unique experience, I do find touring a useful way to learn what pieces are resonating (or not resonating) and in what contexts, especially when working on future projects.

You have often talked about collaboration being a central aspect of your work. Why do you value collaboration?

At its most foundational level, collaboration disrupts any assumption of—or easy reliance upon—solo-authored authority, by continually routing content and experiences through the matters and happenings of another. For me, this method of creative-inquiry is amplified two-fold in the context of You Only Live Twice, as the project is co-created with Mike Hoolboom, and now performed in public alongside you. There is often an insularity to writing that can only be interrupted by sharing and revealing the process in public. I believe this informs why some writers organize feedback groups, and why relationality remains such a key component of cultural production.

One of the striking things revealed between us on tour—other than our love of cheesy garlic bread—was a shared anxiety about the sometimes-necessary space between projects, where the momentum must necessarily dip in order to create space for new ideas. What does the new season look like for you, as you venture out into unknown territory?

Right now, there has been a lot of contemplation. Post-Trump, there has been a proliferation of articles written about what kind of art needs to be made and the responsibility of “the artist,” which have been useful (and necessary) but also a bit intimidating. It’s been hard to think about art-making while also worrying about what is to come and the safety of loved ones.

1.    The incredible attempt (by our hosts) to adorn the Halifax Public Library with patio lights.

2.    French fries and Caesar salad at the Montreal airport after an 18-hour gig day hustle.

3.    Processing in hotel beds while we attempted to nap in Seattle. (TMI?)

1.    Being told by a student, before our Princeton gig, not to expect too much of an audience as Princeton is “not a book crowd.”

2.    Your enthusiastic but often stumbling attempts at social media—like the time you launched our tour poster on Facebook... but without posting the poster!