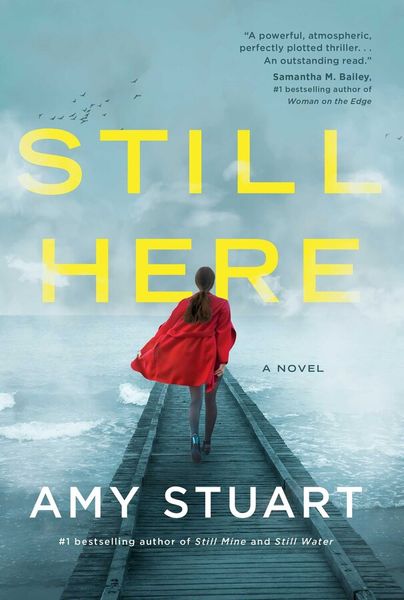 “No. This is not where I die, Clare thinks. I am not still here, still alive, only to die now."

I’ve been thinking a lot lately about how when I was in my late twenties I developed a severe case of agoraphobia. Seemingly out of nowhere, I was suddenly housebound, unable to leave thanks to an overwhelming fear of the most innocuous things—crowds, parties, elevators, stadiums, subways, concerts, movie theatres. All the things that terrified me for no good reason back then, things that I eventually worked so hard to return to, are now the very things we are being taught to avoid.

By the time this piece is published, it will be well over one hundred days that I, like so many, have been almost entirely inside my house. Barring the occasional walk or bike ride around the block, I haven’t really been anywhere, trying to make the most of the handful of rooms I spend my anxious days in. I find I am napping more midday because I am awake for long stretches at night, reviewing my increasing list of worries, trying to balance all the things that need to be balanced, trying to wrap my head around what exactly this new pandemic phase of reentry will mean for all of us.

While you would think that because of this I wouldn’t want to use my to-read pile as a way to heap on any more anxiety, I’ve actually found the most soothing tales while shut in have been tightly wound creepy thrillers. Books with shadowy ominous covers, heavy-handed titles, and surprise twist endings. Books with girls in windows, girls on trains, and girls who are gone. Books that are an unapologetic form of guilty pleasure and temporary escape, offering the all-consuming comfort of formulaic discomfort.

Maybe I’m craving something thoroughly entertaining. Maybe with all the very real worries that keep me up at night my mind can’t handle anything more than a beautifully straightforward read. Maybe I want to swap that laundry list of nighttime concerns for someone else’s fictional ones.

Whatever the reason, I find that spending time with a well-crafted thriller is actually a great way to face real world fear.

“Clare can’t help but look over her shoulder.”

The heroine of Amy Stuart’s latest novel, Still Here, is a woman on the run, trying to escape a past weighted by addiction, vicious abuse, and tragic loss. With a new name and new opportunities, she plunges herself into the perhaps ill-fitting role of private investigator, searching for people that—much like herself—don’t want to be found.

When her colleague Malcom and his wife Zoe disappear, Clare takes on the search herself, arriving in the moneyed and scandal-ridden ocean town of Lune Bay they once called home. While everyone seems to believe that Malcom had something to do with Zoe’s disappearance, Clare remains unconvinced. Ultimately (and unsurprisingly, for a thriller) her digging leads to some genuine danger, and it becomes increasingly clear that the town’s perfect couple had some pretty nefarious secrets.

There’s shady business dealings. A brutal, very public murder with increasingly suspicious motives. Women disappear, while others—much like Clare—are broken by tragedy. As our heroine gets deeper into the murky mysteries of Lune Bay, she puts herself increasingly at risk, wondering who she can really trust.

“In the hotel parking lot, Clare found herself scanning the backseat of the car…before getting in,” Stuart writes. “She feels antsy, paranoid. And then the fear makes her angry.”

Once when I was recovering from an injury and mostly stuck in bed, a book publishing colleague generously handed over an entire bag of thrillers as a “get well soon” gift. I hungrily worked my way through them like a bulging sack of delicious Halloween candy.

There was a technologically savvy stalker on the subway system. There was a long dead twin sister who had actually been alive the whole time. There was, of course, a mysterious couple who lived across the street, an old lady in the house on the hill, and a too-good-to-be-true new husband with something to hide. All these wonderfully twisty, thoroughly compelling (if at times totally ridiculous) narratives—they took my mind off my very real pain so I could regroup and face another day.

In a funny way, thrillers manage to deliver a degree of perspective, however absurd—at least I know exactly what’s wrong, instead of being terrified by whatever mysterious ghost is lurking in the shadows. At least I don’t have to change my name, dye my hair, buy a gun, flee my small town steeped in mystery and lies, be afraid of my brother’s perhaps murderous new girlfriend, be wary of the rich family in the manor up the hill, or be subject to a frame-job by my diabolical stepmother. These books acknowledge our greatest fears while also temporarily freeing us from them—we can finally enjoy anxiety, because it becomes a tool in a great “unputdownable” story, one we’ll willingly and gratefully plunge into.

But perhaps the single most satisfying thing about the conventional thriller is, that despite all of its extreme peril, maze-like plot twists, and myriad red herrings, it almost always offers a neat and tidy resolution. Life, of course, is not like that. Life is unjust, cruel, messy, and unpredictable, often full of open-ended conflicts and unpunished slights. Life doesn’t take a handful of pages to wrap things up and then slide neatly back on the shelf.

If anxiety is defined as a fear of the unknown, maybe thrillers serve us during anxious times because they predictably ramp up the unknown to the level of caricature, and then provide the answers to all their own questions. We need to revel in that kind of tidy ending, that very certain resolution, especially when everything feels so enormously unclear.

“Don’t exhaust yourself focusing on the ways other people have failed you. Shit will come at you that you can’t control, and no one else is going to change their ways on your behalf.”

In her darkest hour (every good thriller heroine has one, but the way) Clare is on the receiving end of this sentiment as part of a necessary, tough love speech. She’s spent the night in jail.  She’s learned some things she didn’t want to know. She’s felt weak and used and unhinged. She’s in very real danger.

“You need to jump off the hamster wheel, Clare. You’ve got to take control.”

What’s deeply appealing about Still Here is that it gives us so many of those healing hallmarks of the classic female-lead thriller. Clare is indeed flawed, and broken, and largely disbelieved. She is anxious, emotional, at times reckless, and makes mistakes. She has experienced some of the worst life has to offer. And yet, with all that, that she is right. She is our hero, despite what people think of her and despite what she thinks of herself.

Clare proves that messy, traumatized, gaslighted, and generally stomped on people can also save the day—which is probably one of the most desirable and generous messages a thriller can ever offer.

There is a welcome inertia to a thriller, a pull from one page to the next into a world so deliciously convoluted, yet so easy to submerge oneself in. In times of heightened anxiety—personal and widespread—perhaps it’s perfectly natural to lean towards these kinds of extreme and absurd tales of fictional woe.

Even with their myriad appealing qualities, thrillers are often on the receiving end of some unnecessary snobbery and derision. They’re dismissed, deemed not “literary” or meaningful enough. I’ll even admit there might have been a time when I was sheepish about my love for the genre, worried that I wouldn’t be thought of as a “serious” reader if someone found my collection of Gillian Flynn novels. But I’ve since learned that a love for the “frivolous” can be vital and deeply healing, and small pleasures—even so-called guilty ones—are often what see us through the darkness.

Perhaps the pleasure is not really guilty at all, but instead completely necessary.

Going Public: A Survivor's Journey from Grief to Action

A Poetry in Transit Book Launch