This article is a part of rob's personal essay series, "Sleeping in Toronto."

Leader Lane leads south to Wellington and across Berzcy Park to Front Street East. For most of the 19th c. Front Street marked the water’s edge, and followed the shoreline of Lake Ontario. 64 Front Street East was the address of The Steamboat Hotel, a portrait of which survives (renamed the City Hotel), by a miracle, in the famous picture Toronto’s Fish Market by W.H. Bartlett. The Scottish novelist John Galt (1779-1839) lived in the hotel on two occasions in the 1820s—making him the earliest literary resident of the city. His stays in Toronto, amounting to almost nine months, preceded by several years the later Toronto visits of Anna Jameson and Captain Marryat, the next literary notables to spend appreciable time in Toronto.
— Greg Gatenby, Toronto: A Literary Guide (1999)

In Toronto: The Unknown City, Howard Ackler and Sarah B. Hood write, “The topography of Toronto is defined by absence.” What once was “front,” the street that touched on water; front of the lake, back to where the city began. Lainna’s balcony overlooking the old Port Authority building, another former water line, a block or so west. The CN Tower with the tiniest lighthouse at its base, barely the size of a child, decorating mini-putt golf. When we found it, near-impossible not to feel sorry, overwhelmed as it is by its immediate neighbour. How can one compete? Intimidation always a matter of scale. A replica lighthouse in Toronto, at the base of such grandeur; like Wilde’s own happy prince, born to do little else but weep.

Rushes of silver light. A little wind plays by itself in the corner of the plaza with whatever: lost leaves, bits of wrapper. Tall shocks of light from the buildings which are only mirrors trying to come clear. A gull, squawking, dips around the Royal Bank tower. Here and there the bombed-out look of bare structure, steel waiting for glass. Only the clues. A pair of trousers stuffed into a hedge, no explanation. A single shoe overturned on Yonge Street, passed back and forth all night by the wheels of opposing cars, now left alone in the morning light, pointing north.
— Roo Borson, “City Lights,” Intent, or the Weight of the World (1989)

In the south end of Kerr Hall, one of the study rooms at Ryerson’s library, near the shelves of Shaw and Shelley, Lainna marks papers and I read an interview with the late American poet Robert Creeley, a conversation scattered from 1963 to 1965, a second-hand issue of The Paris Review. Between the old and the new and what in-between, the first building Ryerson built during the new period, starting in the mid-1950s. Kerr Hall’s east end one of the locations for the movie version of My Big Fat Greek Wedding, substituting Toronto’s Ryerson for a fragment of Chicago. How to connect Robert Creeley with Lainna’s studies of avant-garde women’s poetry? Drive, she said. I scour the shelves for books on our new city, watching her work in a study room on the seventh floor just by George Bernard Shaw, just by Mary Shelley.

At our new local pub, C’est What? at 67 Front Street East, the basement of an old row of warehouse buildings from 67 to 69 Front, a Renaissance Revival space built in 1877 and restored in 1987, with other surrounding warehouse spaces going back even 20 or 30 years. A pub of old stone walls and local breweries. Whether dinner, drinks, conversation or just her doing homework, sitting by the fire. We watched our waiter turn twenty-seven years old, as Lainna slipped out to find him a small acknowledgment, a token. The next table, catching traces of a conversation about Ottawa. One complaining that the sidewalks roll up at five p.m. every night. The other, after eight weeks there, that “Ottawa is one of the most beautiful cities I’ve seen.” 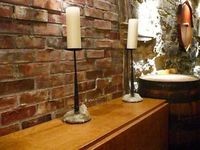 C'est What? on Front Street East

Like much of early Ottawa, a history and a territory of fire, buildings once taken out in the Great Fire of 1849, including the first city hall, and leaving a remaining Toronto that began, in so many ways, full force in Georgian and Victorian splendour. In 1856, for example, when Esplanade Street turned out from landfill, leaving Front Street no longer, heading south to the water’s new edge. As Patricia McHugh writes in her Toronto Architecture: A City Guide (1989):

Only three Old Town buildings from the pre-1834 period are known to remain: the 1827 Bank of Upper Canada at Adelaide and George Streets [1/7]; the 1834 residence and office of Postmaster J.S. Howard, a few doors east [1/7]; and the brick mansion of Judge William Campbell, c. 1822, which had stood at the top of Frederick Street at Adelaide [moved to University Avenue in 1972; see 3/2]. There may be other buildings, but neglect and remodelling have so hidden them that their visual impact is negligible.

The next fire taking out, nearly, the same, surrounding Front Street West for the Great Toronto Fire the night of April 19, 1904, heading into the following morning. Is every fire in history called “Great”? Reducing an area of warehouses and other old buildings to rubble and ash, from Lorne Street, north across Wellington West, west touching Yonge Street, down to Esplanade. It was only 4 a.m., the whole side of the McMahon-Broadfield Building on Front just by Yonge crashing down, which extinguished the flame heading any more west. History and drinks, where we would be having drinks. Scrabble and pints of Dead Elephant Ale, picking from the menu pints based on their unusual names. The taste of hops, almost a Steam Whistle, the waiter said, learning only later the brewery is in St. Thomas, Ontario, and realizing the connection. P.T. Barnam’s infamous Jumbo, the biggest elephant in the world, as the circus came to town and his elephant broke loose, charging a train no one could stop. The great beast at the end of his rope, dead on the tracks. Lainna winced when I related the story. Shuddered. I’m not drinking that again, she said.

Weeks earlier, we touristed along the old Gooderham and Worts Distillery in the “distillery district,” what Mark Kingwell once referred to as “the creepy extermination-camp vibe of Toronto’s own Distillery project.” Mill Street and Trinity, with a stop at the Mill Street Brew Pub, part of which was the site of one of Michael Redhill’s sharpest short stories, the piece “A Bout of Regret,” published in Toronto Noir (2009). To start moving further through Redhill’s writing, from the poetry out into the fiction, his love and knowledge of the history and dark corners of his city quickly becomes obvious from the opening scene:

I’m down a side street in the Distillery District, one of Toronto’s oldest unwrecked neighborhoods. For a lot of years in this city, all the most interesting neighborhoods—at least the ones with a story to tell—have been taken over to build condos, but this corner of the city was so unpopular, so out of the way, that they left it alone. It stands at an angle to the shore of Lake Ontario, close enough to drink its waters, but far enough away from the city’s old wharfs that the only business done from its docks was its own. Until fifteen years ago, the distillery was a miniature city unto itself (complete with its Victorian cobblestones and cramped walkways) that churned out whiskey, rum, and during WWII, acetone. I’d never met anyone who’d been behind its locked gates, and tucked in behind the monstrosity of the Gardiner Expressway, it was all but inaccessible. But it was industrious for an invisible, unloved corner of the city. It was still putting out rum when it closed in 1990.

We ordered the sample tray and took photos of each other, tasting. A packed pub and tables too close together. We held to our corner. As McHugh writes in her guide book:

Begun on this site in 1832, the Gooderham and Worts Distillery is not only a going concern but also one of the best-preserved 19th-century industrial complexes in Canada. It numbers some 45 buildings, the oldest being the 1859 limestone grist mill and distillery, the exterior of which survived an 1869 fire.