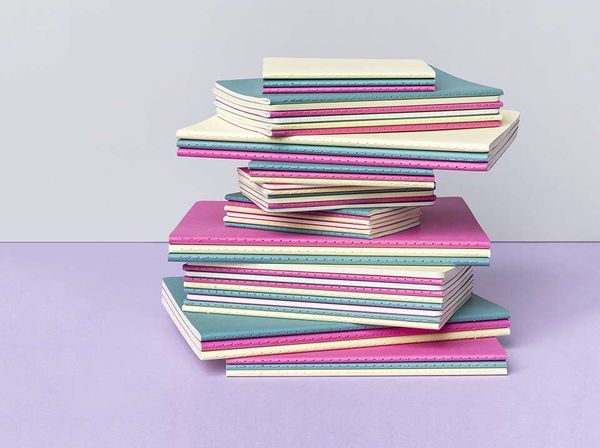 The last time I wrote a story in a notebook must have been back in elementary school. I can remember handwriting in the thin cahiers we were given, double spacing my writing as instructed. Because I was left-handed, the pencil on the page was always smudged by the time I finished, the edge of my pinky finger adorned with lead I had lifted from the page.

Gaining access to a computer changed everything for me as a young, aspiring writer. The software used in my school to teach us how to type was formatted as a game. You received points for your typing speed and lost points for making mistakes. We all compared our word-per-minute (WPM) speeds, and sought to be the fastest typist in the class.

At home, I began to gravitate to the keyboard more and more. Although my family shared a computer, I had created a little folder on the desktop to house my stories, with the hope that no one would open it up and read through it. When I tried to return to writing by hand, it began to feel dreadfully slow and inaccurate. I was excited that a Word document could spell check itself. I was thrilled by how quickly my writing would surface on the screen. I retired my notebooks, cahiers, and scrap paper and instead leaned heavily into my computer for all story-making endeavours.

During my time at university, I made a few attempts to use my notebooks again. I became obsessed with the idea of my physical documents as an archive and clung to an absurd hope that one day my annotated first drafts would find their way into a museum. The problem was, I couldn't make any fully handwritten annotated first drafts. While I managed to use pen and paper to outline stories or take research notes, I found writing a full story by hand to be difficult because of the disconnect between my mind and body. While I could whizz through stories while typing, I found that my handwriting could not keep up with the speed that my mind was coming up with sentences. It wasn't just the speed that stopped me though. After a series of wrist and thumb injuries towards my last years in university, long periods of sustained writing became physically painful for me.

I went through many, many healthcare providers who didn't believe that my condition was as painful as I described and prescribed treatment simply as “rest and don't do anything that could agitate it.” Eventually, I switched to a new healthcare provider who actually believed my condition was real, listened to my experience around the pain, and worked with me towards a treatment that didn’t interrupt important aspects of my life like writing and martial arts. I finally received the care I had been seeking since the initial injury occurred. A few months before the pandemic hit, I regained a full, pain-free range of motion in my hands for the first time in years.

When the COVID-19 safeguards and restrictions ramped up, my writing practice grinded to a halt. Instead of my mind whizzing with ideas as it had before, I became sluggish and perpetually tired. Like many during this pandemic, I had a hard time coping with my own stress and fear for myself and my loved ones. When I confided to a fellow writer that I just wasn’t able to write lately, she suggested trying to write by hand. For the first time in a long time, I was physically able to do so.

This time when I approached using pen and paper again, I didn’t find that disconnect between my mind and body as I had before. My mind was no longer sprinting ahead, leaving my body scrambling behind. I found that writing by hand at this time fit the pace that I needed to process my ideas in the current conditions I was in. More than that, I realized that writing by hand was reconnecting me to this as a practice of joy and discovery. Writing at a slower pace by hand was allowing me to rediscover my love of carefully stringing word to word, of sound and meaning and structure.

Even though I knew I didn't use notebooks consistently, I was always the first to buy another beautiful $5 one in the bargain bin of any bookshop. From a minimalist olive branch to an intricate constellation, it was easy for any design to catch my eye and convince me to make the purchase. On my bookshelf, I have a stack of half-finished notebooks with all sorts of messy plot outlines and research notes. But now, these pages are starting to bloom again with longer fictional scenes and full poems. Maybe this time - even at my snail's pace - I might actually write to that last line.