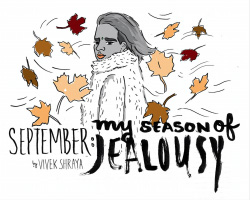 September marks the beginning of award announcements and big fall book launches. In recent years, September has also marked the beginning of my season of jealousy. I feel apprehensive typing these words and maybe that’s why they’re important to say. It’s also likely why my reflections on jealousy are fragmented:

1. The life of an artist is one in which your work is repeatedly overlooked and rejected (even if the optics tell a different story). This is difficult enough, but as you become enmeshed in any industry where resources are scarce, not only do you continue to face rejection, but you also have to bear witness to who is given what you were denied. This often breeds a misplaced feeling of competition.

3. An unfortunate consequence of my jealousy is that it has impeded friendships with peers whom I have kept at a distance because proximity to success I have craved has felt too painful.

4. Anyone who says “awards don’t matter” is likely steeped in privilege.

5. A few years ago, I congratulated a writer on being a finalist for a Governor General’s Award:

Quietly, he responded: "If I follow the logic that I deserve every nomination I receive, then I have to carry that through to every time I am not nominated—that I didn’t deserve it."

I think about this conversation often during award season, and about how astute this writer is. A large part of what diminishes my sense of self-worth is the way deservedness is tied to any success.

6. Being on a number of juries has offered me a different and helpful perspective on deservedness and “winners.” In my experience, a winner is decided based on an assortment of unpredictable factors which can include whom the jury can all agree on, who won the previous year, what kind of message the jury wants to convey through their choice, etc. A winner is seldom chosen simply because they were better than the rest. Historically, this has been where my rejected mind has taken me to—that my work was inferior.

7. In my experience, jury decisions are seldom personal. And at the same time, jury members can be racist, homophobic and sexist. This can’t be separated from the personal. Being angry about racism, homophobia and sexism, however necessary, takes its own toll, but for me, acknowledging these prejudices and giving myself permission to feel angry about them has sometimes helped to alleviate my jealousy of a specific person.

8. I have tried many strategies for managing my own jealousy. One of my go-to’s was a leftover from my religious past (and therefore likely also a form of penance): I would try to imagine the face of a person I was jealous of in a giant ball of light. Jealousy was momentarily replaced by a somewhat forced feeling of warmth during this five-minute meditation but always returned shortly thereafter. A more useful strategy has been trying to discuss jealousy with writer and artist friends. These conversations have been awkward on both sides, but despite that, it has been comforting to hear the ways others grapple with the same emotion. From these conversations, I have learned how common, how ordinary jealousy is. Or rather, how ordinary it is to desire.

9. What has been most effective for me has been, unsurprisingly, admitting my jealousy even just to myself: I feel jealous right now or I really wanted to win. Not unlike other hard emotions like grief and shame, I have found that trying to evade the emotion, trying to pretend I am not jealous, doesn’t erase the feeling. It’s only when I let myself feel jealous that I am eventually freed from it.

10. While owning up to and talking about jealousy is useful, telling someone else you are jealous of them is rude and dismissive. Be upset about your losses, but directing your feelings at those who got what you wanted is a waste of energy and can be hurtful.